Vienna Carnage - It Was Waiting To Happen

It was waiting to happen

Politics and religion have always made for a volatile mix in Punjab. The Vienna violence - in which two spiritual leaders of the Ravidass sect, widely revered among the Dalits of Punjab, were attacked by Sikh radicals leading to the death of one - has provoked a backlash at home.

But ominously, it has unleashed an element of caste in a state which has the country's highest density of Dalits and yet no history of caste conflicts. At one level, the Austrian attack and its violent repercussions are symptomatic of a complex social churning resulting from the upsurge in Sikh fundamentalism over two decades.

To add to this, there was also the wave of migration from the predominantly-Dalit Doaba region in the same period. Sikh militancy, in recent times, has been fuelled by a sharpened religious divide between upper caste Sikhs and landless Dalits.

This chasm, coupled with the near total dominance of Jat Sikhs over the control of gurudwaras abroad and in Punjab, lies at the root of a tectonic shift in caste equations in the state. It has propelled the economically-empowered Dalit community to assert and carve out a religious identity - a trend that has lent currency to Punjab's fast proliferating dera culture which the Sikh orthodoxy characterises as a deviation from the tenets of Sikhism.

This conflict is more pronounced overseas where the cash-rich gurudwaras, many of them controlled by Sikh radicals, are seen as centres of social and political clout. This could explain the Vienna attack as there has been no past history of conflict between the Sikhs and the Ravidass sect in India.

A redeeming feature of the ugly situation that held the state to ransom for 72 hours has been a prompt condemnation of the Vienna attack by the Akal Takht and the Shiromani Gurdwara Parbandhak Committee. The Sikh clergy even organised an 'Akhand Path' at the Golden Temple.

Though the Badal government could have acted with greater alacrity, the state's political class was quick to express solidarity with the outraged Dalits.

Organised a "akhand paath" for a self proclaimed Dehdharee GURU who sits at par with SGGS and matha tekaas from sangat ?? ???? IS this ALL for the NOORMEHAL SEAT ??:}--}::whisling::rofl!!:

This entire matter is so strange I would like to throw out the following hypothesis -- do not laugh. All of the principal players are shapeshifters -- not who we think they are -- the real ones have been beamed up to a starship -- and the aliens have landed.

Badal sells out on the Sikh Community

Posted in General News by Panthic Weekly Editors on the May 27th, 2009 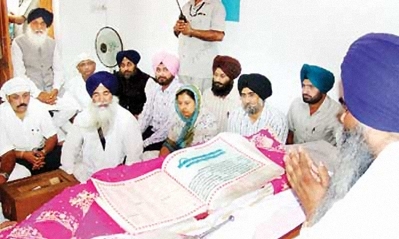 
Sri Akal Takht Sahib : - Parkash Badal, Sukhbir Badal, along with his BJP companions, organized an Akhand Paath in room 10 behind Sri Akal Takht Sahib, at Sri Darbar Sahib complex, on behalf of Nirajan Daas, the Ravidasi leader who was injured at the Vienna Ravidas Sabha Mandir in Austria last weekend. Badal also told the press that he spoke with the injured Niranjan Daas, and expressed his condolences for the Vienna events.
The Akhand Paath was initiated with an Ardas by Giani Dharam Singh, and started by Sri Dabar Sahib Head Granthi, Giani Jaswinder Singh. Various members of the RSS linked BJP were present at the Akhand Paath, including the controversial Navjot Sidhu. The senior Badal, himself, sat above the sangat at the same level of the Manji Sahib of Sri Guru Granth Sahib Ji, which itself is a serious violation of the Sikh Rahit Maryada.
........................................(continued)

Does the above comply with the Sikh Rehit Maryada ? :

​
Only an Amritdhari (baptized) Sikh man or woman, who faithfully observes the discipline ordained for the batptized Sikhs, can enter the hallowed enclosures of the Takhts (Ardas for and on behalf of any Sikh or non-Sikh, except a fallen or punished (tankhahia) Sikh, can be offered at the takhts.

​
Offical Punjabi version of the above: Sikhism

I don't think they organised an Akhand Paath to praise the Sant who allowed worshippers to bow down to him.. Because of course that was wrong/a sin - But I think there's a positive reason as to why this was done which was in order for peace:

2) To create peace amongst Ravidassias and Sikhs altogether & obviously the principle that violence isn't the way to go..

Yet, I do obviously understand the reasons for why this is negative - because if the Sant, in a sense, disobeyed what Guru Ji told us NOT to do and a person goes ahead and does this, then it probably IS UNnecessary to go to this extent of organising an Akhand Paath - But I guess that depends on if there's any consequences of doing that which Guru Ji said - Of that, I do not know..

One can have as many Akhand Paaths one wants to have/organise by paying others to read the whole SGGS. What is the point if hearts are not changed? And hearts can only be changed by understanding and hence by putting into practice what Gurbani teaches us, otherwise it is all propaganda. No peace can be achieved just by parroting Gurbani.

I do agree ^ but to a certain extent there is a point.. The more the Guru Granth Sahib Ji is heard, the more people will listen.. And then understand, like you say, and so the more this will encourage people to (hopefully) change..
K

India is now land of politician kings and queens.Yesterday Manmohan singh' s ministers
took oath and majority of young polticians that are given ministerial berths are sons ,daughters, or Grandsons of politicians.CNN IBN showed a cartoon mantri mandal should now be called BETA.beti mandal.
K


Mishi said:
I do agree ^ but to a certain extent there is a point.. The more the Guru Granth Sahib Ji is heard, the more people will listen.. And then understand, like you say, and so the more this will encourage people to (hopefully) change..
Click to expand...

Gyani's should to explain shabads to common public in simple language O/W the meaning of Gurbani will go over the head for most of people.


kds1980 said:
Gyani's should to explain shabads to common public in simple language O/W the meaning of Gurbani will go over the head for most of people.
Click to expand...


True.. Well I think watching the media like "The Sikh Channel" is great! Those discussions they have.. Translations of shabads, stories of the Guru Ji's.. It's really inspirational and encouraging!

Now I feel ashamed to say people that Sikh doesn't believe in castes.