Mentor
Writer
SPNer
An American Leadership Conference was held at the International Peace Education Center in the afternoon of December 12, 2015, titled “America at a Turning Point: Principles and Values for Building a Nation of Peace”. In the face of recent threats to peace on the world stage, the topic was compelling to the participants. There were over 80 participants present for this event. 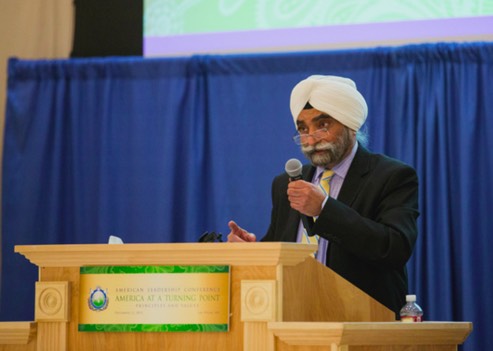 Following an invocation by the Rev. Emanuel Wasson III, a welcoming letter from the governor of Nevada was read. Katherine Duncan, Chairwoman for the Universal Peace Federation (UPF) Las Vegas, made note that the governor’s office building was built at the very place where True Father planted a Holy Ground in 1965.

Richard De Sena, President of UPF USA, introduced the program and welcomed a senator and former ambassador who gave congratulatory remarks with warmth and excitement. An impassioned review of the Principles of Peace was given by Dr. Thomas Walsh, President of UPF International, clarifying the principles and purposes of UPF and the work that is done worldwide.

A stimulating panel discussion was led by Rev. Emanuel Wasson. Mr. Teji Malik, a Sikh Community member and a board member of the Southern Nevada Interfaith Council, spoke sincerely regarding the value of interfaith work and the need to respect others, that we have one Source and we are all connected. Mrs. Lynn Walsh, Co-Chair of the UN NGO Committee on the Family spoke about the concerns about family breakdown and how this impacts peace on the individual, community, and even worldwide levels, and how valuable the family is for peace. Naokimi Ushiroda, President of the Collegiate Association of the Research of Principles, spoke about the needs of youth for mentoring, modeling and respect to develop into mature and engaged individuals. All the speakers spoke with such heart and sincerity, the participants were very moved.

Seven Las Vegas people were awarded an Ambassador of Peace appointment. Following the program, there was much excitement and discussion among participants, followed by a reception for another hour with many people connecting with others and new friendships forming. UPF was grateful for all who prepared for and presented in the event to help make it meaningful for local Ambassadors of Peace and all others who participated.