SPNer
Supporter
The Sikh Temple on Terra Buena Road was founded in 1969 on the 500th Birthday of Guru Nanak Dev ji. This temple, having grown by leaps and bounds over the past 28 years, now serves one of the largest, if not the largest, concentration of Punjabi-American immigrants and followers of the Sikh religion in the United States.

The gurdwara is located in the Yuba Valley, near Fresno California, where grapes, prunes and raisins are major food crops and agriculture is the main industry.

Each year, from its first year of existence, at this time the Gurdwara hosts a celebration in honor of the Gurgaddi of Dhan Sri Guru Granth Sahib. This year will be the 29th celebration. The celebration takes place over 3 days. And of late has been covered by television media. TV media coverage has been extensive for several years.

You may be able to view part of the celebration on Saturday on television if you live in the California area, or have the right satellite connection. There is an Internet link for streaming coverage. I will check periodically tomorrow to see if it really works. If you are interested, then check this thread periodically for my updates.

Here is a bit of news coverage from several celebrations from the past, including last year's celebration of the Guru Granth Sahibji -- with a lot of pics at this link.
Link to yubacitysikhtemple.com
L

SPNer
Do you know the date and time they will have a Nagar Kirtan? Thanks for the information.

Ji, in previous years the Nagar Kirtan was part of the parade. You can call them to get the exact time. Don't forget time-zone differences if you are not in California.

SPNer
Supporter
Here is a better description. from the Sikhnet.com web site.

YUBA CITY, CA - For the 29th straight year, Yuba City's Sikh community will welcome Sikhs from all over the world to celebrate one of the holiest days on the Sikh calendar. The three-day event runs from October 31st through November 2nd and commemorates the receipt by Sikhs of the Guru Granth Sahib in 1708 as a perpetual spiritual guide that directs the Sikh faith.

"It is said that Guru Gobind Singh instructed his Sikhs to search for him within the Sacred Writings contained there, and to find enlightenment by meditating upon them", said Kuldip Singh Atwal, Sikh Temple Secretary.

For many Sikhs, this isn't a normal parade for them. "This is a celebration of our religion, our culture, and gratitude towards all our guru's who lost their lives while believing and protecting our culture which is called Sikhism", said Didar Singh Bains, President, Sikh Temple. The spirit of Guru Nanak will be felt throughout the weekend, which is: work hard and earn an honest living, pray and share your earnings with your fellow beings. 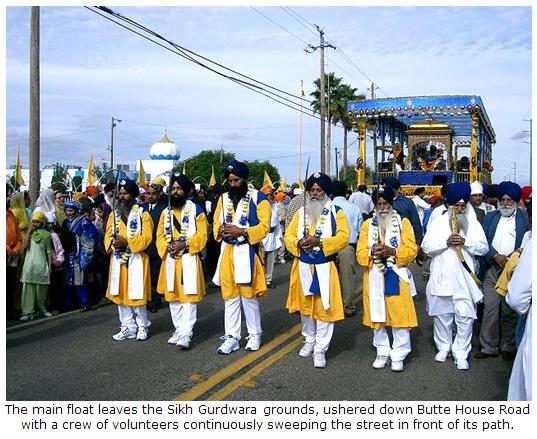 On Friday morning, October 31st, the day will begin with the traditional start of 48 hours of continuous readings of the Guru Granth Sahib, Nishan Sahib Sewa and then Paath of Sri Guru Granth Sahib. Friday evening ends with a spectacular display of fireworks at the Sikh Temple Yuba City expected to be attended by more than 25,000 people. "It's 30 minutes of non-stop fireworks", said Karm Bains, Sikh Temple Director. "These are five-inch canister fireworks that are usually only seen at the top fireworks shows in the country", added Bains.

On Saturday, an Open House is expected to be attended by California Lt. Governor John Garamendi. Attending last year as well, Lt. Governor Garamendi complimented and praised the Sikh community for outstanding contributions to the region. The Lt. Governor met with leaders of the Sikh Temple and walked the grounds.

When the 48 hours of prayer ends Sunday morning, the entire 1,430-page text of the Guru Granth Sahib will have been read aloud, and then carried onto a lavishly decorated float. After the bhog of the Akhand Path Sahib, the main float leaves the Sikh Gurdwara grounds, ushered down Butte House Road with a crew of volunteers continuously sweeping the street in front of its path.

Flower petals will rain down from a helicopter hovering above the ceremony and parade. Thousands of Sikhs will then walk alongside the floats. Along the parade route, Sikhs families who have set up food booths will provide free drinks, snacks and prepared food for the throng of visitors. The 4 and 1/2 mile parade is expected to draw a record crowd, more than 80,000 people, on this the 300th Anniversary of the Guru Granth Sahib. 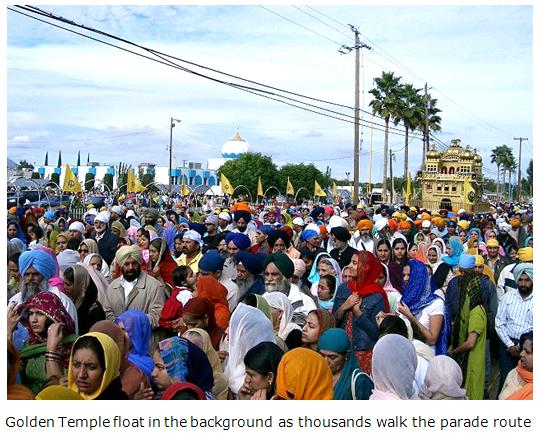 More than 50 floats will be in the parade. Among the parade participants will be a fleet of Harley Davidson Motorcycle's from the Sikh Motorcycle Club in British Columbia, Canada. Floats are expected to be ornately decorated in themes that reflect the vibrant nature of Sikh Culture, Sikhism and of the Sikh way of life.

Inside the Sikh Temple Yuba City grounds, kirtan and langar stalls will be evident everywhere. The local community will display the Sikh core values in the symbolism that goes into the preparation and serving of nearly a quarter million free meals.

Sikhs will then begin arriving back at the Sikh Temple Monday morning at 4 a.m. to help clean up not only the Sikh Temple grounds but also along the parade route. The clean up usually takes less than one day to complete.

See below -- This looks like the TV channel and date for the complete TV coverage. But I will check for the TV coverage on November 3 for you tomorrow.

SPNer
Thanks a ton for the information. The site is very helpful too.

Today is the day -- if you live in California you may want to participate. If not, I will post the day and time of the television overage which is coming up later in the month. 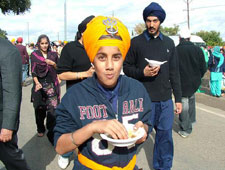 YUBA CITY, CA: Even the rains just before the Yuba City Sikh Parade failed to cast a dampener but a clear sky, sunny morning, religious fervor and love of the eternal Guru brought out some 70,000 Sikhs for the 29th Parade on Sunday, marking the 300th year of the Guruship of Sri Guru Granth Sahib, the scriptures that carry the message of peace and universal brotherhood, and make Sikh religion the most unique.

Sikhs came from as far as Washington DC, Los Angeles, Espanola, New Mexico, Vancouver and elsewhere in Canada to honor their Guru’s message as waves of blue turbaned youth and saffron dupattas, traditionally salwar-kameez dressed and attired in western clothes mingled, all enjoying the hymns of gurbani wafting over the crowds.

Besides Sikhs, people from almost all faiths joined in the parade and expressed their thankfulness for a unique experience.

The actual programs ran for three days and while Friday and Saturday witnessed Kirtan Darbars, Dhadhi Darbar and Kavi Darbars, there was also a seminar held that was dedicated to the tercentenary of Gurta Gaddi Diwas.

Sikh gurdwaras from all over the USA, various Sikh organizations, Sikh Student Associations, cultural clubs and business organization had their floats decked with multi-colored backgrounds with motifs of Guru’s message. The gurbani hymns added to the dreamlike atmosphere of the parade. 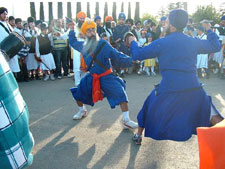 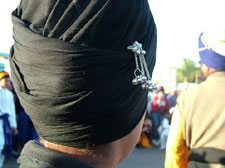 [/FONT][FONT=Verdana, Arial, Helvetica, sans-serif]The Sikh Parade that has blended with diverse cultures of Sutter County attracted many a TV crews, journalists of ethnic and American media and artists.

The Sikhs of course felt proud of the show and the media back home in Punjab and community media across the globe focused on the show but perhaps the real achievement was in something as common place as a group of young white American youth coming to see the parade at the insistence of a Sikh friend and complaining that they really wanted some little booklets to be distributed so that they can read a bit more about this wonderful religion.

In post 9/11 times when there is a dire need to tell the world who the Sikhs are and how their religion and scriptures have the message and the community has the conviction that teachings of the Guru are in consonance with the most democratic ideals of a just and peaceful society and ideas of love, peace and devotion will be the ruling ideas of the world. It is here that the Yuba City Sikh Parade succeeded in underlining the message. 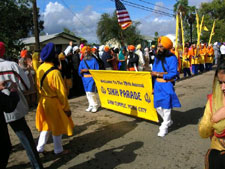 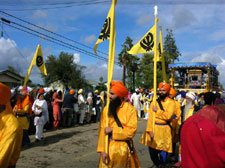 [/FONT][FONT=Verdana, Arial, Helvetica, sans-serif]That’s why the neighboring Americans who live along the route of the Parade instead of complaining about the traffic congestion actually look forward to the occasion, and some even call their friends to have an experience of the Sikh culture and religion showcased. That the Sikhs distribute free snacks, food and drinks in keeping with their great religious tradition of Langar only helps to win more.

But perhaps those more closely linked with the politics of the Sikh domain could not but help notice the control that Didar Singh Bains was still exercising over the stage, not allowing anyone to speak beyond the allotted time or bringing in local politics. The winning side of course also tried to stress its presence during the Nagar Kirtan. 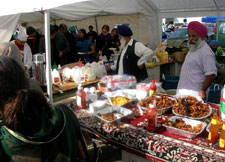 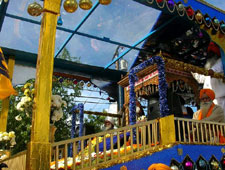 But perhaps it is the Sikh Parade that wins all hearts and remains the core of the celebrations in Yuba City every year. The excitement of the young in preparing, decorating and equipping their floats gives them positive energy to stay away from drugs, crimes and gang involvement. They consider themselves a part of the community that advocates recognizing other faiths, groups and belief systems.

The Sikh Parade also increases interaction of the community with elected officials, lawmakers and law enforcement. 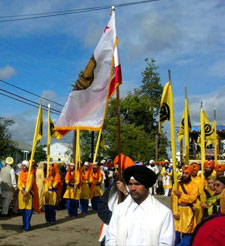 [/FONT][/FONT][FONT=Verdana, Arial, Helvetica, sans-serif]It is a great challenge for the Sutter County to make arrangements for the parade. Lt. Governor John Garamendi joined the congregation on Saturday, November 1, 2008 and watched a movie about the universal message of Guru Granth Sahib. Three more movies were screened to make connection with the Sikh history. One such movie focused on the tragic life of Maharaja Duleep Singh who suffered unbearable miseries at the hands of the British. Sherriff department had made elaborate arrangements to maintain order for the free flow of traffic on the streets.

This writer talked with a number of people to know about their experiences who came for the parade for the first time. Robert, Garry, Pete and Pam came all the way from Sacramento. Though they did not know anything about the actual purpose of the Sikh Parade, they however figured out it was for peace. On being informed about Guru Granth Sahib’s uniqueness, one of them suggested some written information would have been very helpful for the first timers like him.

Students of Punjabi course at Sacramento State University and Sacramento City College at Davis while enjoying the Parade were able to read many signs in Gurmukhi and were so happy to experience what they were learning in the classroom. Katie, though she has been living in Yuba city for last four years now, came for the first time on the suggestion of a certain friend. She said it was so ennobling for her and her children and that she would not miss any parade in the future. 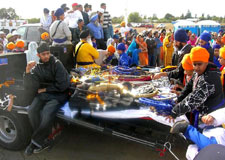 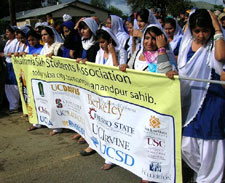 TV channel 8 will telecast the coverage of the Parade on November 23, 2008 at 4 PM and November 29 at 3 PM. It is also available on Online at www.mykbtv.com . Newly founded JUS Punjabi TV on Dish Network Channel 809 covered live all proceedings of the 29th Sikh Parade.