Forward:
As the sole canonical Sikh authority, the Guru Granth provides an internal threefold criterion for comprehending the profound messages within its poetic injunctions. This consists of:

Context:
The context, it should be appreciated, is not the context provided by the various atrophied self-alleged Sikh Brahmgyanis and preachers who lace it with Indic/Vedic mythology. The latter is a blatant misappropriation which derails Gurbani’s unique reworking of pre-Sikh terms while negating its distinctive spiritualism. This malpractice is prevalent in Gurdwaras in the Punjab and beyond with illiterate Sikh preachers inimically fusing Gurbani and materials it derides to the degree that differentiation is rendered impossible for the layman. The Guru Granth’s context is not reliant on alien elements for interpretation and imbibement. Nor would its depth be rendered defunct if Indic mythology is removed from any curriculum geared towards understanding its content. Its context is entirely innate and should be interpreted in light of its content rather than any exterior purviews.

Continuity:
The continuity of context when reading Gurbani is crucial and entirely reliant upon first comprehending the primary verses of Guru Nanak. If these are read and appreciated in their own unique light rather than in that of antithetical material, a continuity can be provided to the context within the Guru Granth. This is crucial given that the message of the canon is reliant upon the singularity of Guru Nanak’s thought. This very same singularity establishes the context which permeates the rest of the scripture.

Conspicuous examples of inconsistent continuity can be found in the never-ending hair splitting which is triggered among Sikh ranks whenever the issue of Reincarnation is brought forward. As we discussed in our recent podcast episode, Guru Nanak makes evident his dismissal of Reincarnation as some physical process in which the soul moves house from one body to another. He advises it to be a mental process via which an individual consciously/subconsciously imbibes base animal traits when bereft of any comprehension of reality. With this purview, a continuity of context can be established via which subsequent verses on Reincarnation can be understood as per their specific author’s intentions. This, though, is ignored when the continuity of context is overlooked to associate Sikh doctrine with preceding archaic doctrines.

Rahaao:
Rahaao denotes gist. The gist of a particular hierarchy of verses, in a specific composition, can only be deduced by comprehending the line alongside the mentioned Rahaao. For example:

“I solely remember a Guru in each and every phase of my life; a Guru who has become the cause behind my life and behind my success in life.”

The Rahaao verse elucidates why the author (Guru Arjan) remembers a particular Guru (in this case the truth) in each and every phase of his life because this very Guru is the reason behind his success in life and lends it meaning. The gist is for the reader-accept the truth for it will lend your life meaning and make you successful in realizing it. The truth can only be remembered 24/7 if it is made the constitution for living life. Otherwise, the charade of repetitive chanting with each and every breath is dismissed in the Sikh ethos.

The Divine Debt Collectors:
Keeping the above three-fold parameters in mind, let us analyze the mythos of Dharam-Raaj and Chitar-Gupt-the allegedly divine debt collectors. Dharam-Raaj, in conventional Indic mythology, is the deity regulated with arbitrating upon one’s conduct in life and then delegating transgressors to his hellish realm where they suffer eternal damnation. In his dispensations, he is assisted by his chief-of-staff Chitar-Gupta or Revealed/Unrevealed who is able to discern any dichotomies between the defendant ’ actions and the intentions behind those actions. Upon learning of a human’s demise, Dharam-Raaj dispatches his Yamdoots or hellish foot-soldiers to torment the soul and drag it to his realm. There is, however, excessive discrepancies between the multiple Indic texts which mention the existence of Dharam-Raaj.

Origins:
The conceptual birth of Dharam-Raaj is found in the Rig-Veda. There, he is named Yama and becomes the foremost entity to die in order to pave the way to the afterworld; the power over which he is entrusted with. His second appearance is in the Atharva-Veda in which he has evolved into some super-deity and now retains two dogs to do his bidding. Subsequent texts mention him sporadically. In the Bhagvad Gita Krsna asserts that he himself is Yama. Irrespective of the superstitious spiritual tint given to this statement, its grammatical syntax evinces that Krsna is by no means elucidating that he permeates Yama but that he is Yama Per se. In the Srimad Bhagvatam, this explanation is contradicted when Krsna travels to Yama’s realm to liberate a devotee’s deceased son.

It is in the Brahama Purana that Yama emerges as a fully etched-out deity. In this latter text he is lent a distinctive identity apart from others of his pantheon and given a sterling tribute. The Puranas being supplemental to the Vedas, Brahama establishes the criterion for Yama’s subsequent appearances. But as countless scholars have underscored, Yama evokes an expansive contradiction within the Vedic ethos. Is Reincarnation a metaphor for hell or is hell an alternative to Reincarnation within which the soul is tormented for a brief period? The Rigveda, Atharva-Veda, Shatapatha Brahmana, Srimad Bhagvatam, Bhagvata Purana, Devi Bhagvata Purana and the Manusimriti expound that Yamaloka, Yama’s realm, is indeed an existential realm transcending time and space but one within which the soul undergoes palpable torment for eternity.

In the early twentieth century, Dayanand Saraswati attempted to argue that Yamaloka was figurative. However, the veteran Sikh scholar Giani Ditt Singh took him to task and in a series of editorials illustrated how the Vedic genre of literature left no doubt as to the existence of Yamaloka in the tactile sense. Saraswati, much embittered against the Sikhs, was unable to resolve the contradiction between Reincarnation and Yamaloka. Were they alternatives? If so, then what damned one to the cycle of Reincarnation via which a second chance could be obtained and Yamaloka where any form of amnesty was absent? The quagmire is still to be resolved.

Revamping:
The inclusion of existent terms within Gurbani by the Sikh Gurus was done with a twofold aim. On the one hand the masses had to be instructed with concepts and elements relatively familiar to them. On the other, Sikhi’s distinctive essence had to be preserved against the ravages of atrophied conventional faiths. Guru Nanak appropriated the terms Dharam-Raaj (synonymous with Yama) and and Chitar-Gupt but revamped their definitions. In his purview, Dharam-Raaj became a metaphor for impartial justice and was housed within the human mind. Gone was the deity Yama. Dharam-Raaj became an aspect of the refined Bibek or intelligence. An enlightened Sikh utilizes their Bibek to discriminate between what is right and what is wrong. A retrospective analysis of one’s day-to-day life accrues one enough clarity to improve upon the next morrow thus transforming one into a Dharam-Raaj.

This necessitated the consecutive re-defining of Chitar-Gupt as well. The conventional perspective (plagiarized by the Sikh Pujaris of today) holds that the soul is confronted by Yama and Chitar-Gupt who takes a mischievous pleasure in acting the Devil’s Advocate. The Sikh definition of Chitar-Gupt obliterates all vestiges of its theoretical predecessor. The Nanakian Chitar-Gupt is a mental compound. Chitar is the exterior character; Gupt the internal intent. By no means is the concept a deity which can be placated through worship as inscribed in the Vedas. Rather, it is a mental equilibrium which can only be struck into equipoise by the individual through rigid discipline.

Dharam-Raaj, an aspect of the human intellect; Chitar-Gupt, a mental process-the Yamdoots were rewritten as regrets. These consist of fears which manifest upon one’s deathbed. Mankind’s challenge in the Nanakian equation is not to dissolve all sense of responsibility and self in worship. Rather, humanity is to sharpen its Bibek a part of which constitutes discriminating between right and wrong (Dharam-Raaj); synchronizing deed and intent (Chitar-Gupt)-all the while accepting the reality of Creation and contributing to its progress.

Revolution:
This revelation of Guru Nanak met its fair share of detractors. The Guru, though, had foreseen this. His words in Japji articulate that the conventional Yama and Chitar-Gupt are nothing more than mental effusions originating from unrestrained minds. As such, they are illusions which are still subject to the Creator’s power as the Creator gifts humanity with its unbridled intelligence. This conventional duo is exposed, in Gurbani, for what it really is: a fear tactic.

“In the presence of the enlightened Beings I was entrusted with great responsibility. This alleviated all my mind’s doubts. What can the (archaic) Dharam-Raai do to me now? All his ledgers have been shredded to bits.”

The comprehension of Hukam (reality) consists of accepting the resultant Naam (Gian or wisdom) and living life in accordance with it.

“They who serve their Maker, they are given this imperishable understanding: there is, in reality, no coming and no going (Reincarnation). This effaces all their anxiety and anguish. Chitar-Gupt and the Yamdoots have their existence negated as a result.”

Prior to the Sikh Gurus, Bhagat Kabir challenged the Hindu clergy on the issue of Dharam-Raaj even going so far as to proclaim:

“I have stormed this Dharam-Rai’s chambers and destroyed all his records. Now nothing can be found against me.”

Verdict:
Gurbani explicitly rejects any tactile definitions of Chitar-Gupt, Dharam-Raaj and Yamdoots. How the Pujariwaadi Deras can still claim that their alleged Brahm-Gyanis have seen these three concepts in personified form defies common-sense. 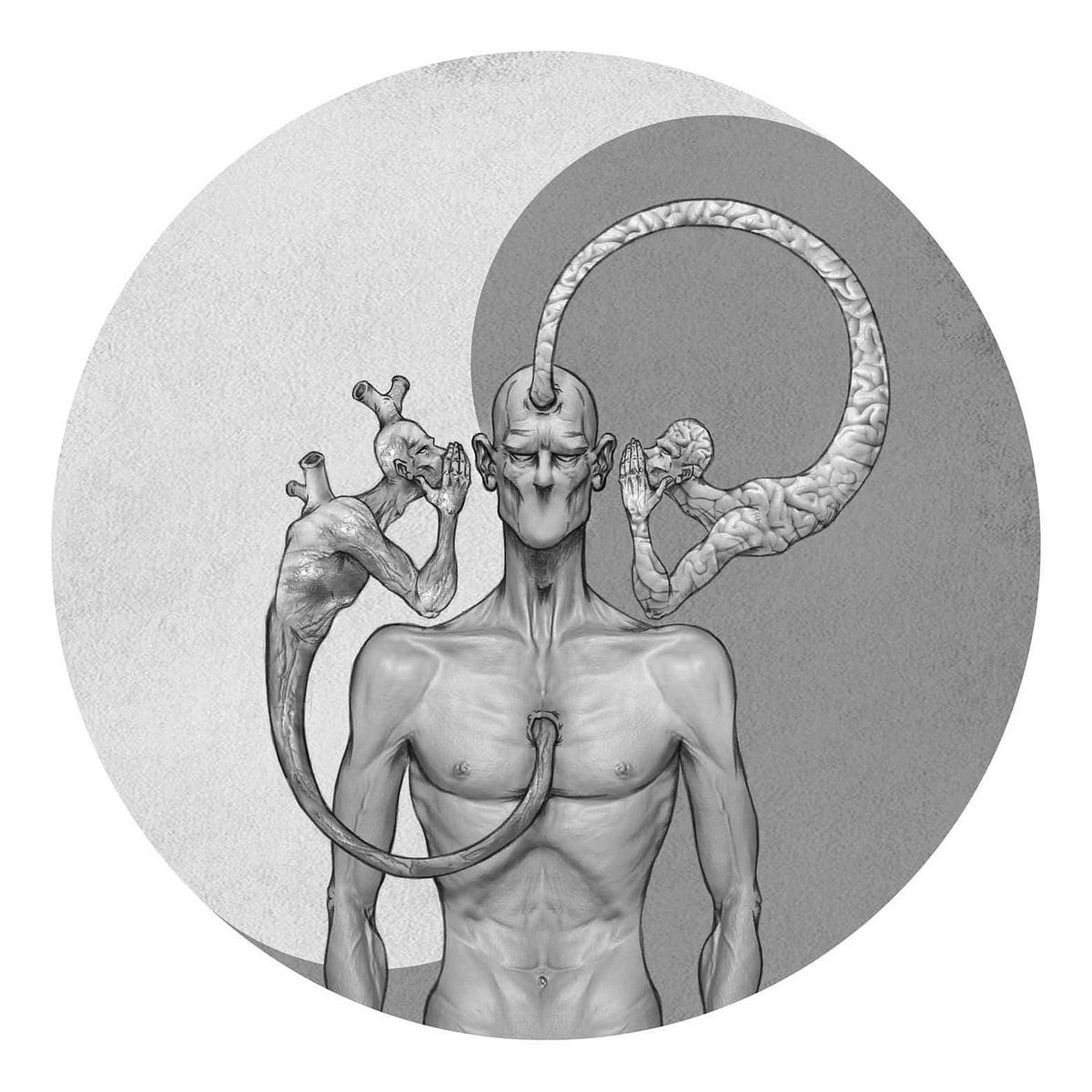