At the height of wedding season, Jagdeep Singh Grewal professionally ties the turbans of four or five grooms a day. He is up before sunrise and often returns home long after dark. While the weddings can blur into each other, one incident has stayed with him.

On a cold October morning in 2018, Grewal arrived at the groom’s house at 5am. The groom’s mother pointed to a picture of a man wearing a turban and asked him to mimic the style. As he got to work, stretching out the fabric, then stitching and tying the turban, Grewal was taken aback by how emotional the groom’s mother and uncle became. The family were moved by the groom’s resemblance to the man in the photo, who Grewal later learned was the groom’s father – a former soldier in the Indian army who had died. “I could relate to it because my dad isn’t around and it was a tough moment,” Grewal says. 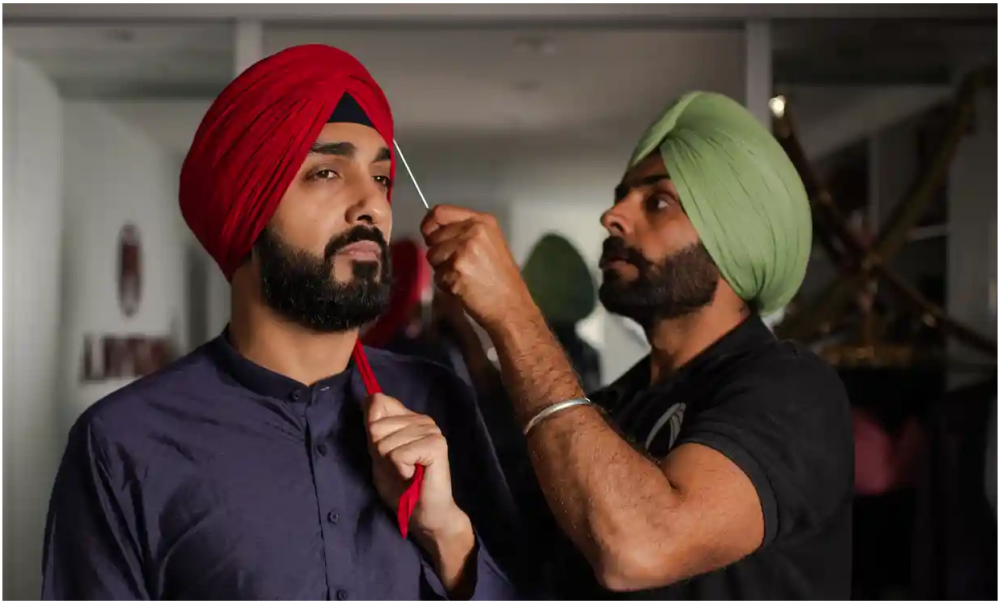 The 32-year-old runs Pagh Vala, a turban-tying service in London, with his friend and business partner Barinder Singh Bath. Theirs is part of a growing industry of bespoke turban-tying services in the UK, driven in part by younger members of the Sikh community displaying increasing pride in their roots and the rise of Bollywood stars such as Diljit Dosanjh bringing turbans into the spotlight.

“It’s all about connecting people with their culture and heritage,” Grewal says. “We’ve become more westernised and we don’t know how to tie turbans. And it’s good we have embraced the western culture, but we should remember who we are.”

“It used to be family members who tied the groom’s turban, but now you can hardly find a family member to tie a turban,” says Sukhvir Aujla, who runs Tying my Turban, a business based in Wolverhampton, with her husband Taranvir Dhanda.

It’s not just turbans either. There are services for brides who want their saris pinned or gele headwraps professionally tied. Tokunbo Oluderu, a sales associate at Finetex Creatives, which sells fabrics for African headwraps and offers a wrapping service in London, says: “When we opened the shop, we saw a lot of people who came to buy a headwrap, but didn’t know what to do with it.”

While the Highland store, based in London, largely hires and sells kilts to its customers, it is becoming more common to have to show customers how to correctly wear their outfits. “We have people who come here who say their grandad is a McDonald or something like that and they have not worn kilts before,” the sales assistant Monica Zalapicz explains. “We show them how to put the kilt on, which side to wear the kilt pin, and which tartan is most appropriate to their family clan.”

Pete Singh, 39, the founder of Turban Pro, says: “Everyone wants to look good. It’s the main part of the outfit and your face is going to be in pictures, so you have to get the turban right.” He adds that he often works with “diva” grooms who are quite fussy about styles and shapes.

Dr Jasjit Singh of the University of Leeds, who studies religious and cultural transmission, says: “Community elders thought that the younger generation would move away from their heritage, but what we’re seeing is an increasing interest in understanding one’s roots.”

Naroop Jhooti, 38, a London-based photographer and co-author of the book Turbans and Tales, says: “Forty years ago, wearing the turban meant you couldn’t get the job, or could face racial abuse, so the older generation would wear black and didn’t want to be noticed. They wanted to be able to fit in. But times are definitely changing. The younger generation are taking more pride in how their turbans look.”

Singh agrees there is a greater pressure on migrants to conform in the 1960s, but “those born and bred in Britain now are comfortable to say they are British and wearing a turban doesn’t make them any less so. They are less prepared to compromise on their identity.”

Business owners welcome the enthusiasm for professional turban tying, but add that the religious connotations should be respected. Gucci was recently heavily criticised for selling a headpiece resembling a turban.

Kully, 30, who didn’t want to give his last name, hired Turban Pro for his wedding last year, saying he wanted it to look right and respect his culture. It was the first time he had worn one. “It really hurts your head and gives you a headache,” Kully says laughing, but adds that he really enjoyed wearing it. “Everyone complimented it, even the priest,” he says. It was the reaction from his dad, who has worn the turban his whole life, which he savoured the most. “He just looked at me and said: ‘Wow.’”