Every day the past beckons anew.

Today we revisit the life and times of Banda Singh Bahadur, an iconic figure from the 18th century. He strode on the Sikh stage for only a decade.

History determines where we are at any moment and which way we may be headed. Now, 300 years later, distance in both time and space help us explore Banda Bahadur’s life meaningfully and dispassionately. His achievements continue to shape us, while his missteps(?) haunt us.

First some reflections on the nature and purpose of history before we visit Banda Bahadur’s eventful life. 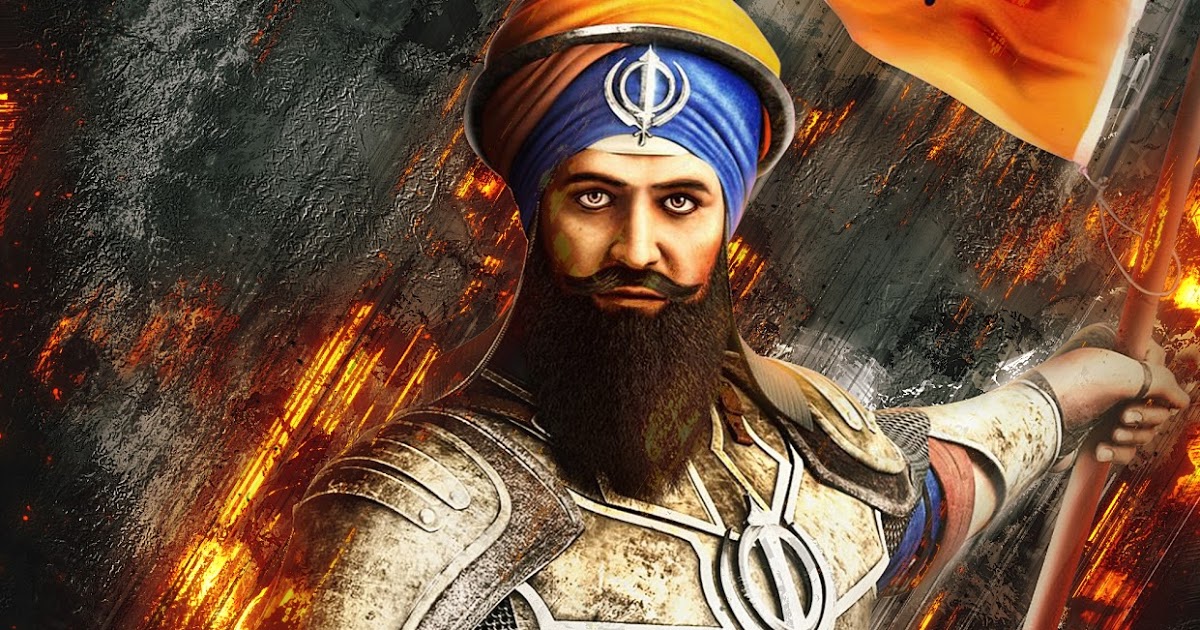 History interlinks the three beads of time -- past, present, and future. If the linkage breaks, life loses its continuity and purpose. So, history is not just a random collection of dates and events, pestilence and war; birth and death; cruel or stupid acts of egomaniacs; moments of inhumanity that are better forgotten. History is often a personal, familial or tribal narrative, some notable, some horrendous.

Why should we rummage in the dustbin of the past for lessons to the future? Because there is nowhere else to look. History is written by victors, proclaims a common truism. Given human bias and our eel-like slippery memory, no history is entirely true or always verifiable.

History is society’s collective memory, of our social conventions and their lessons, of skills for life and work. History is full of imagination, pleasures, dreams, or demons. Not a narrow specialty, history addresses the larger concerns of humanity – its needs, wants, fears and hopes, our existential imperatives. Events that transcend time and space, that demand versatile skills or dumb luck. Politics and business look to history to build a future, much as a cook revisits history for a successful recipe. Generals and scientists need it, as do artists and poets. Without history, there would be no empathy. And that would be a poorer world, if there were to be a world at all.

By connecting us to others, history shapes human development. History sees life through our eyes and that of many. The foundation of Renaissance rests on a history of failed and successful lives. History talks about matters that we don’t want to know about but might need to know about. History stops us from making narrow interpretations about our lives. It is the only textbook of human nature that we have, one that is constantly updated.

“Those who do not remember their history are condemned to repeat it,” said George Santayana. We connect with our past through stories and traditions; it is the only way to touch history.

Let’s turn to the life and contributions of Banda Bahadur, without a doubt one of the premier iconic figures in Sikhism, bar the Gurus. At age 15 he abandoned his home and became an ascetic; he was so moved by the suffering of a dying doe that he had shot while hunting. He became a yogi and established a monastery (mutth) in Nander near the bank of the river Godavri.

On September 3, 1708, Madho Das met Guru Gobind Singh. His one brief encounter with Guru Gobind Singh was utterly transformational, indeed magical, and he became a totally devoted Sikh, hence the name Banda as in man or slave of the Guru. I see no comparable phenomenon in human history; indeed, and no other parallel in Sikhi like him. The Guru escorted Banda to his own camp nearby, where he was initiated into the Order of the Khalsa.

The Guru awarded him a battle drum, a banner and five arrows as emblems of authority, along with directives to the people of Punjab to cooperate with Banda. He deputed five prominent Sikhs – Dya Singh, Binod Singh, Kahn Singh, Baaj Singh and Ram Singh -- to accompany Banda Singh and dispatched them to Punjab on a mission for justice. And to lead the Sikhs and wage war, if necessary, in the name of the Guru.

Moments like these are rare in human annals but they have a claim on us. The renunciate, Banda Bahadur, became a phenomenally successful warrior and leader. Banda Singh Bahadur lived and died for Guru Gobind Singh and Sikhs.

In the face of unchallenged Islamic political power, driven by passionate frenzy to convert the Hindu multitudes, what was Banda and his small but growing band to do? Banda Bahadur appealed to the Hindu satraps and local rulers to join him in the cause for justice and religious freedom. None stepped forward. This would be a disheartening moment in Banda’s mission but he remained undeterred.

As he reached the borders of Sirhind this Banda-led people’s crusade had become a raging storm. History says that they leveled Sirhind. History also tells us that the nearby Muslim principality of Malerkotla was spared, protected by Sikhs then, and again in 1947 which claimed millions of Sikhs, Muslims and Hindus during the large-scale rioting during the struggle for India’s independence. Why such kindness towards Malerkotla, a Muslim base then and now? Simply because the ruling Nawab had refused to endorse the sentence of death for two sons, 6 and 7 years old, of Guru Gobind Singh.

Banda won his first set battle at Chappar Chiri (aka Chappar Jhiri) on May 12, 1710; a memorial to this historic site dates only from 2009. Two days later Sirhind belonged to the Sikhs with Baaj Singh as its governor.

Banda Singh Bahadur established the very first Sikh ruled territory in 1716; he was a wise ruler not only to the Sikhs but to his Hindu and Muslim subjects as well. He deserves recognition for the first ever land reforms in India; this granted rights of ownership to those that tilled the land, not merely to those that owned it. He issued a silver coin, but in the names of Guru Nanak and Guru Gobind Singh, not his own.

Today we remember Banda Singh Bahadur three centuries after he burst on the scene and electrified it. It is way past the time to recognize that his footprints revolutionized India, and particularly Punjab for the better.

On June 21, 2016, the Government of India honored Banda Singh Bahadur with a silver coin in his name. A magnificent memorial -- 17-foot-tall statue standing on a 23-foot pedestal -- was unveiled on December 18, 2016 in New Delhi, the capital city of India. A rare, well deserved honor. Remember that Sikhs do not approve of statues of Gurus or other religious idols; lest these iconoclasts be transformed into icons that people might worship. Yet, it is a human need to celebrate them because they are markers of high purpose, enviable achievement and supreme sacrifice.

Unfortunately, Banda’s life knew little peace. He and Sikhs endured a siege that lasted eight months. Finally, he was taken prisoner along with 740 Sikhs and his own four-year-old son. History speaks also of 700 cartloads of heads of Sikhs and another 2000 stuck upon spikes.

Banda was offered the choice of converting to Islam or death. His response was that of a Sikh warrior. His infant son was hacked to pieces before his eyes. His own hands and feet were chopped off; his flesh torn with red hot pincers.

There is also another side to the coin.

Many controversies about Banda Bahadur remain largely unresolved. What circumstances dictated the razing of Sirhind? What would Sikh values and history say? Some documents suggest a rift between him and Mata Sundri, the widow of Guru Gobind Singh. The Sikh community apparently split between the loyalists of Banda (Bandayee Khalsa), and those who were not (Tat Khalsa). The reigning monarch was reputed to have advanced a formula for peace. Was that the root of the rift between Banda and other Sikhs? Mata Sundri reputedly appointed Bhai Mani Singh as the arbiter; however, history remains unclear on the details. Did Banda issue any Hukumnamas, as was the wont of the Gurus? Then there are minor issues like, who did he marry, when and where? What happened to her?

These and other gaps in history demand a good faith effort to resolve them.

But Banda’s ascendance was followed by almost a century when Sikhs were a hunted people; their survival was on the line. Also, from times immemorial India has not valued written history that tries to hew faithfully to facts as we unearth them. This cultural shortcoming that persists today is well recognized as the bane of historians.

Also, don’t forget the reminder by T.S. Eliot of the “cunning passages and contrived corridors of history that deceive us by vanities.”

With a gap of some years another period of Sikh self-governance dawned during Nawab Kapur Singh’s time; and 92 years after Banda emerged Ranjit Singh, who ruled wisely over greater Punjab for almost half a century.

By any measure of a life, Banda Singh Bahadur was a man larger than life.

In my introduction to this priceless issue of Nishaan, my first instinct was to pick some choice citations from the articles within it and whet your appetite by a short patched narrative around them. I let that tempting path slip away simply because the possibilities were too many and overwhelming. I hope that this introduction to a complex man and his trying times would send you running to the contents within.

In penning this Editorial I concede that I learned a lot, as I am sure so will you, of Sikh history and its intricacies from the erudite writings that you will accost within this issue.

Remember that the past is a prologue to the future. Exploring and connecting with the past takes us forward (“Babaaniya kahaaniya puty saputh karein” Guru Granth p. 951).

Originally published as the Editorial to a Special Issue (on Banda Singh Bahadar) by Nishaan Quarterly 2016 (New Delhi).