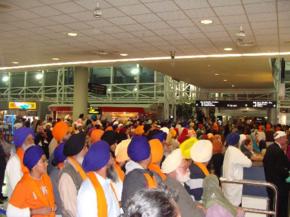 It was a spectacle to watch the Auckland Airport arrivals hall flooded with Sikh devotees assembled there to receive the 31 Granths, which were arriving via Australia. There were 31 people who were barefoot and not carrying any other belongings other than a copy of the Guru Granth Sahib with respect on their heads. There were another 14 people accompanying them to relieve the main 31 carriers in case of any eventuality.
Upon arrival at Auckland International Airport there were special arrangements made to ensure their speedy clearance. Special buses had been arranged to take the arriving group as well as the devotees present at the airport to Takanini Gurdwara where the Granth carriers were presented with robes of honour followed by langar. Members of Parliament Hon Chris Carter and Rajen Prasad were also present at the Airport.
The Guru Granth Sahib – the living Guru contains the holy scriptures of the Sikhs. No Sikh ceremony is regarded as complete unless it is performed in the presence of the Guru Granth Sahib. The Granth was written in Gurmukhi script and contains the actual words and versus as uttered by the Sikh Gurus. Initially known as the Adi Granth, it was compiled by the fifth Guru Arjan and installed in 1604 in Sri Harmindar Sahib (Golden Temple), Amritsar.
The tenth Guru Gobind Singh added to the Adi Granth the composition of his father, Guru Teg Bahadur. It is believed that four copies of the Granth Sahib were prepared, the first one was sent to Sri Harmindar Sahib at Amritsar, the second to Anandpur Sahib, the third to Patna Sahib and the fourth to Nander Sahib. Guru Gobind Singh did not include his own verses in the Granth, owing to his modesty and humility.

Every copy of the Guru Granth Sahib consists of 1430 pages. It contains the banis (sacred compositions) of the first five Gurus and the ninth Guru as well as a number of passages of verses written by several non-Sikh saints from Muslims, Hindus even so called "untouchable" castes. Altogether the Guru Granth Sahib includes 5894 shabads (hymns or holy verses) which are arranged in 31 ragas (musical measures). The first verse is the Mool Mantra, followed by daily prayer or Nitnem namely, Japji, Sodar and Kirtan Sohila. The renaming verses have been arranged according to their individual musical patters or ragas.

The Guru Granth Sahib is an anthology of prayers and hymns. Most of the hymns are addressed to God and often describe devotee's condition: his aspirations and yearning, his agony in separation and his longing to be one with the Lord. The subject of Guru Granth Sahib is truth: how to become 'a person of truth', that is, an ideal person. As Guru Nanak states in the Mool Mantra, God is the ultimate truth and one has to cultivate those qualities which are associated with Him, in order to be like Him. The basic concept behind the hymns is that sacred music, when sung or listened to with devotion and undivided attention, can link that individual's consciousness with God. A mind may become stable and enjoy the peace of his divine presence as listening to the hymns can exert a powerful influence on the mind and help to establish it communion with God.

The Guru Granth Sahib is a book of revelation. It conveys the Word of the Master through his messenger on earth. It is universal in it scope. For Sikhs the greatness of Guru Granth Sahib lies not only in its being ther holy book but also in it being a general scripture intended for everybody, everywhere.

The Guru Granth Sahib also explains what Guru Nanak meant by a 'perfect individual' or a gurmukh. It is a remarkable storehouse of spiritual knowledge and teachings which does not preach any rites or rituals but stresses meditation on the Name of God. Through its teachings, it can enable men and woman to lead a purposeful and rewarding life while being members of society. It seeks universal peace and the good of all mankind. The Guru Granth Sahib also stresses the democratic way of life and equality of all people. It teaches that we are karam yogis, that we reap what we sow. The emphasis is on moral actions, noble living and working for the welfare of all people. Respect and veneration for the Guru Granth Sahib does not imply idol worship, but rather respect for a divine message, the ideas and ideal contained in the Sikh scripture. Meditation on the True Word, Satnam or the Wonderful Enlightener, Waheguru, or on any line of a verse in the Guru Granth Sahib, may bring the true devotee or disciple to be in tune with God.

Today, when one visits a Gurdwara (a Sikh temple), the Guru Granth Sahib forms the main part of the Darbar Sahib or Main Hall. The holy book is placed on a dominant platform and covered in a very beautiful and attractively coloured fine cloth. The platform is always covered by a canopy, which is also decorated in expensive and very attractive coloured materials. The text in which the Granth is written is a script called Gurmukhi (literally "From the Guru's mouth"), which is considered a modern development of the ancient language called Sanskrit.
You must log in or register to reply here.
Share:
Facebook Twitter Reddit Pinterest Tumblr WhatsApp Email Share Link