We expect the contents of most of the products we use these days to be man-made; however, many everyday products still use animal body parts as an ingredient with companies finding innovative ways of making sure every little bit of the animal does not go to waste, says Clare Mottershead.

From the sheep parts hidden in your soap, to the fishy ingredient in your favourite pint, the bits of the animals that do not make it to our dinner plates often end up being turned into products we use everyday.

This is the weird and wonderful world of animal by-products, where industrious companies have devised clever ways of taking the inedible parts of animals like cows, pigs and sheep and using them to make covetable consumer items.
One such firm in Norfolk collects cow intestines by the bucketful from local abattoirs and turns them into the kind of natural gut strings favoured by many of the world's top tennis players.

To produce the strings, the cow guts are cleaned and cut into 40ft strands before being chemically treated to preserve them.
Each string is made up of 15 individual strands which are spun very tightly together to coalesce them, before being dried out in a humid room to prevent cracking.

It is a painstaking process that takes six weeks from start to finish, but according to Rosina, it is worth the wait.

"With synthetic string, once it's in the racquet and is hit by a ball, it will stretch and stay stretched, but because gut has a natural memory, it always tries to return to its original form, therefore absorbing the shock a lot more and reducing the risk of tennis elbow."

The company, which has been plying its unusual trade for more than 100 years, also uses the same techniques to produce gut strings for harps and other early instruments.

The intestine is just one of the many parts of a cow's anatomy that can be put to a valuable use.

For as long as beef has been eaten, cow hide has been turned into leather via the tanning process and cattle bones, transformed into fine bone china, have found their way into the finest dinner services and tea sets imaginable.

In a more modern innovation, cow hooves have also become part of an important product. A protein called keratin, extracted from the hooves is used to make a special fire extinguishing foam used by airport fire and rescue teams across the UK.

The foam is specifically designed to quell the hotter, high intensity fires triggered by aviation fuel.

The keratin helps to bond the foam bubbles into a durable blanket, which stops it breaking up on impact with the fire and makes it very effective at smothering flames.

"I don't really think too much about where it comes from," says firefighter Simon. "It's a good barrier between myself and a fire, so as long as it's keeping me safe when I'm using it, I don't have a problem".
The cow is not the only animal whose spare parts can be put to good use - and not all by-products come from mammals.

Isinglass is a product employed by the brewing industry as a fining agent for some beers - helping to ensure the final pint is clear rather than cloudy.

It is made using an organ called a "swim bladder" or "maw", found inside some species of fish. When inflated, the bladder serves as a natural buoyancy aid, keeping the fish upright in the water.

Historically, swim bladders were extracted from the beluga sturgeon.
"It's believed the world 'isinglass' is an anglicized version of the Dutch word 'huizenblas', meaning 'sturgeon bladder,'" explains brewer and beer historian Peter Haydon.

Today the sturgeon is endangered, so most bladders are harvested from other species of fish including the Vietnamese catfish.

To become isinglass, they must be dried, sterilised and cut with acid to produce a paste or liquid that is added to the barrel during the later stages of brewing, to help the yeast used to make the beer settle as sediment. 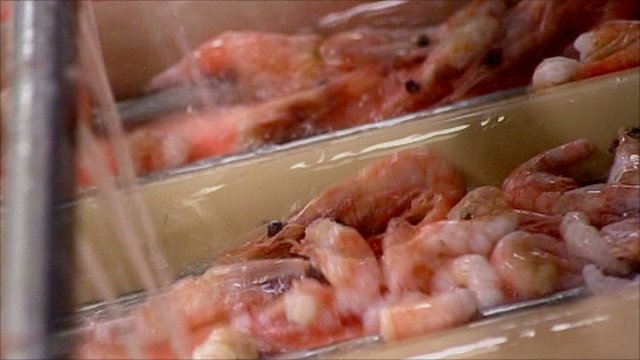 Isinglass is a very pure form of collagen, and it is the long, stringy collagen molecules that help speed up the natural sedimentation process by attracting the molecules of yeast.

The yeast and collagen combine to make bigger particles, which fall more quickly to the bottom of the barrel, leaving the liquid above much clearer, much more quickly.

It is a moot point whether any of the fishy substance actually ends up in the glass. Studies have shown that in the majority of cases, isinglass is undetectable in the finished pint, although some bottled conditioned ales and cask ales, if served from too near the bottom of the barrel, may still contain minute amounts.

In any case, it is just one of many examples of the way we have learnt to make the most of the natural properties inherent in the parts of animals we eat, that might otherwise go to waste.

Guru Granth Sahib Ji declared this centuries ago..."Remember..when an ANIMAL DIES..its dead body is used by man in a number of ways..BUT when a MAN dies..his body is completly useless...Das kaaj swareh..dead animals serve in at least 10 ways..but a dead human is worthless !! YET HUMANS take so much PRIDE in their form/body..pampering it etc etc...which on death incurs more financial LOSS while a dead animal is a Finanacial GAIN even in DEATH !!

To those who Sikhs...who "use" Goat Skin Tablas etc..BUT also "justify" this as from sick goats, diseased goats..and best of all "old age goats" ...this article is further fodder for such "justifications"...so will a SIKH...say NO to TENNIS...to buttons..to fire extinguishers...etc etc...or say its all from "old aged cows..sick cows..etc and so is OK..HA HA.. Best is Go back to GURBANI....and listen carefully to what the GURU SAYS..and we will not be embarrassed in any way..or be self defensive..etc...

How advanced Nanakian thinking was.

He recognised the folly of arguing over flesh 500 years ago!!:whatzpointsing:
B

Randip Singh said:
He recognised the folly of arguing over flesh 500 years ago!!:whatzpointsing:
Click to expand...

Mmmmmmm........ and yet every other post of yours is related to meat.

Breeb said:
Mmmmmmm........ and yet every other post of yours is related to meat.
Click to expand...

because imho.."meat eating" is dragged in "screaming" into every Tabla and dholki that the so called "anti-meat eating" sikhs whack in the Gurdwara and outside the Gurdwara when the Tabla shoudl be an accompaniment to Gurbani as is supposed to be...It would seem that every Waja/harmonium sur or key was a "goat" in its previous life and now wants to shout out its..WARNING..BEWARE the paap..or you will be born a goat and get your neck sliced off..or scrapped bit by bit in Hallal killing. Sadly all this is sheer nonsense as far as Gurbani is concerned and no such thing as paap etc exists in this context..hence the "Award of "FOOL" for those who continue to play this broken record...but to no avail....hence the reaction to every action...its pointless to point fingers at "reaction"..and ignore the "action" that caused the reaction in the first place..

Breeb said:
Mmmmmmm........ and yet every other post of yours is related to meat.
Click to expand...