The Sikh relief organization Khalsa Aid, which supplies aid to refugees in makeshift camps, found itself helping motorists. The organization was given a blue light escort to distribute 5,800 bottles of water and cereal bars to those stranded.


Aid worker Ravi Singh organised the drop after seeing images of the traffic on social media. He told Sky News the organisation normally works in the refugee camps where there is no water. He said: “And this is Britain, and I think the government should really have prepared for this, especially on a day like this, on a hot day, to provide some sort of reassurance if this happens there is a plan B.” 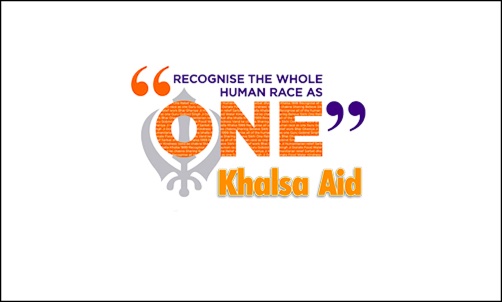 British border officials were drafted in to work with their French counterparts at Dover to ease huge queues of ferry-bound holidaymakers after many faced delays of up to 16 hours as roads to the port came to a standstill at the weekend.

The delays, which forced some motorists to spend the night in their cars, were expected to last into Monday, police said, and have been caused by the “vast volume of holiday traffic”, and heightened security at the border following increased checks by French authorities in the wake of recent terror attacks.

Kent police said on Sunday morning travellers could expect delays of 10 hours on the A20, with about 12 miles of traffic queueing back to junction 11 of the M20. Those travelling to the port were urged to take food and water supplies. Delays of more than an hour persisted on Sunday evening.

UK holidaymakers heading off for a summer break spent up to 16 hours in 20C heat in traffic jams on the A2, A20 and M20 on Saturday. Police used helicopters and motorcyclists to distribute 11,000 bottles of water to those stranded in traffic, though those caught up in the chaos complained about a lack of water and toilet facilities.

Congestion showed signs of easing early on Sunday, but the Port of Dover warned of waiting times of two-and-a-half hours from Roundhill Tunnels at Folkestone, about eight miles away. Once in the port, motorists faced a further 120 minutes to reach the French border checks.

After complaints that just one French officer was available to check in coaches on Friday night into Saturday, port authorities said six booths - four for cars, one for coaches, and one for freight traffic – were staffed overnight into Sunday.

P&O Ferries sought to reassure motorists who had already missed their allotted ferry, tweeting: “Rest assured, if you are stuck in the queues at Border Control in Dover we will put you on our next available sailing at no extra cost.”

Port of Dover Travel tweeted that the estimated waiting time to get to the port on the A20 from Roundhill Tunnels was five and a half hours on Sunday morning, and one hour from Whitfield on the A2.

Among those stuck in traffic was Tanya Cudworth, 50, who has multiple sclerosis. She was travelling to Germany for potentially life-changing treatment on Monday.

Cudworth, from Derby, who had raised £5,000 for stem cell treatment at a Frankfurt clinic, set off from Tunbridge Wells with partner Steve Deene, 53, at 8.30am on Saturday, and finally made it on to a ferry 20 hours later at 4.20am on Sunday. She described the experience stuck on the A20 as “absolutely horrendous”.

“During the day it was so hot and there was nowhere near enough water and at night it was pitch black so you didn’t know what was going on around you. You couldn’t sleep because you had to keep moving forward,” she told the Press Association.

“We didn’t get any water until 3am and I saw women with babies, young families and people with pets with no water. It’s shocking that more wasn’t done to get it to people. The authorities weren’t anywhere to be seen.”

At one point, the couple turned off the A20 to try to find a hotel but everywhere was booked and they had to return to the queue.

Ollie Burridge, travelling with family to Barcelona from South Wales, told the BBC they had been stuck in traffic for 16 hours on the A20 waiting to board their ferry. “Everyone got out of their cars,” he said. While some played around with a football on the closed London-bound carriageway, he and his family got out bats and balls, and “played a spot of tennis over the central reservation”.

Their holiday plans were severely disrupted as they had lost their hotel night in Dijon, and would “have to try and drive that little bit further to Avignon to get to Barcelona on Monday”, he said.

The Home Office acted as the severity of the disruption became clear late on Saturday. Questions have been raised about staffing levels by the French border police to deal with the huge number of people travelling.

Port of Dover authorities claimed French border control booths at Dover had been “seriously understaffed” overnight. It claimed at one point coaches were forced to wait 40 minutes so that all passengers could be checked in as only one French official was available.

Xavier Czerwinski, the deputy secretary of the Pas-de-Calais prefecture, told journalists “the maximum number of staff have been deployed” to deal with the influx of holidaymakers.

“It’s an exceptional situation because it’s the weekend where the British leave for the continent ... and there’s the situation in Europe and the state of emergency that has been extended in France,” he said.

He added that border agents were required to “check all vehicles rigorously”. Another factor, he said, was that the ferry companies could only deal with so many customers at any one time.

In addition to the Home Office sending in UK border staff, Kent police will be “proactively managing” traffic in a bid to reduce delays that have clogged roads during the busiest weekend of the summer break.

A government spokeswoman said: “We recognise the security pressures that French law enforcement organisations are under at Dover and we have agreed the UK Border Force will assist the PAF (French border police) with border checks to remove the backlog.

“We understand that there has been extraordinary disruption in the Dover area today [Saturday] but safety is paramount. Measures are also being taken on the approach to the port where Kent police will be proactively managing traffic to speed up the process.”

Cross-Channel ferries were forced to leave port half empty to meet sailing times. Motorists trapped in the queues for most of Saturday complained of lack of information about when the disruption might end.

Among them, Joerg Walther and his family, who live in Lincoln, described the situation as unprecedented. “Police and service vehicles were driving up and down the westbound carriageway,” the IT worker, 50, travelling with his family to his home town of Giessen, near Frankfurt, told the Press Association. “Also no food other than from a kind local.”

After 14 hours they had travelled about 10 miles before they speeded up, only then to be greeted with a sign warning of a further two-hour wait when they reached the border.

He said it had taken an ambulance almost an hour to reach an elderly man who became distressed on an nearby coach.

Police advised people to stay in their cars, despite temperatures peaking at 20.2C (68.36F), though many got out to wait by their vehicles. Children played football to entertain themselves, while others played music and danced on the gridlocked roads. Footage from the blocked M20 shows young families dancing to a steel drummer accompanied by a tambourine player. In another video a man was playing his banjo while waiting by his stationary trailer.

The Conservative MP for Dover, Charlie Elphicke, who was himself stuck in traffic for about two hours on Friday, said there had been a lack of forward planning that led to “poor transport management”. He called for the government to apologise for the “traffic nightmare”.

The shadow home secretary, Andy Burnham, accused the government of being “caught ill-prepared once again” and said the prime minister should have expected heightened security checks in France.

Many travellers vented their frustration on Twitter. Motorist Alison Dillon tweeted: “Update on journey; still not there 20 hours queuing. My niece walked to find food & fainted in petrol station. Disgrace.”

UK port authorities have said they have no authority over French operations, but said they had raised the staffing issues with the government last week.

A spokewoman for the Highways Agency said: “We also expect that next weekend will be busy, but not as busy as this weekend.”