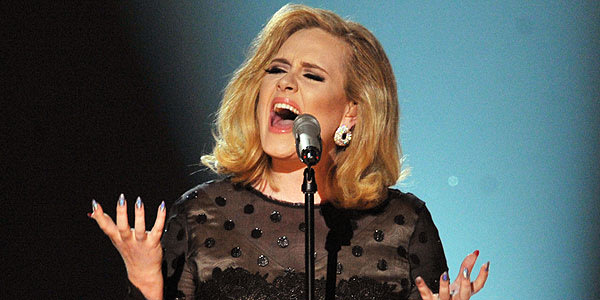 (Photo by Kevin Winter/Getty Images)
Picture this: You are alone in your car driving home from a long day at work. You flip through the radio stations on your stereo trying to find something to ease your stress while stuck in traffic. Suddenly, Adele's "Someone Like You" comes on and as her soulful voice hits the lyric, "I heard that you're settled down, that you found a girl and you're married now," you feel chills down your spine and your eyes begin to water.
Don't be embarrassed, you're not the only one grabbing a tissue.
Scientists have figured out why this particular song elicits this particular reaction from so many people: the presence of a musical device called an "appoggiatura."


Simply explained, "An appoggiatura is a type of ornamental note that clashes with the melody just enough to create a dissonant sound." Psychologist Martin Guhn tells the Wall Street Journal, "This generates tension in the listener [and] when the notes return to the anticipated melody, the tension resolves, and it feels good." He also adds that, "Depending on the context, we interpret this state of arousal as positive or negative, happy or sad." However, why do we keep listening if we know that this tune will put us in a melancholy mood? The answer is dopamine.
According to Dr. Robert J. Zatorre of McGill University, when we experience "emotionally intense music" dopamine is released in the pleasure centres of our brain and it feels like a reward. He compares it to the effects we feel after food, sex or drugs and says that it "motivates us to repeat the behaviour."


In 2011, Dr. Zatorre conducted a study in which he measured listeners' responses to music and identified a correlation between the number of goose bumps that appeared and the amount of dopamine that was released. He found that "the more emotions a song provokes—whether depressing or uplifting—the more we crave the song."


Even though there is an identified science to why certain songs make us tear up, we shouldn't discount the other reasons why they do. When we sense a connection to art we emit an emotional response. We can tear up while looking at a painting, watching someone dance, portraying a character on stage or on screen and in most cases, without the help of an appoggiatura. Sometimes, you don't need to identify why something makes you cry, you just have to cry.

Enjoy the song below and get a hanky out for the first one,

Following not Adele but how beautifully sung,

Yeah Ambarsaria Ji! I like Adele too! Everyone on this forum has such impeccable taste. My favourite song by her is Hometown Glory. Here's a video you might like:
Adele Home Town Glory, Live Lounge Special, pt3 - YouTube

I have never heard any of her songs myself, and as this pc has no soundcard, I will have to install one before I listen to the above, but the article was spot on, if I have understood it correctly, then the following song contains many such appoggiaturas, as I find it impossible to listen to without getting emotional, not sure if its the song, or the events of the time, however this could well turn into a thread of songs that make you cry motherlylove