If you for some reason decide to surrender in devotion to Swami Nithyananda, the following anecdote is likely to be part of your initial lessons. It’s one he keeps recounting to the multitudes at his ashram in Bidadi, near Bangalore, curious and eager to have his wisdom rub off on them: A professor happens to visit a Zen master. While the master quietly serves tea, the professor blabbers on about Zen. The master keeps filling the visitor’s cup till it started overflowing. The professor blurts out, “It’s full! No more will go in!” “This is you,” the master says. “How can I show you Zen unless you first empty your cup?”

Become empty first. This is one of Nithyananda’s first commandments. It’s also probably one of the most essential. As devotees drop their critical defences, he fills them with his worldview, his aura to transform them into loyal followers. This model of indoctrination is not unique to Nithyananda. Across India, for that matter elsewhere, one of the first sermons that godmen will drill into devotees is, outsource the thinking to the guru while devotees free their minds in pursuit of the blissful feeling of spirituality. As Bhargavi Hemmige, a research scholar at Mysore University who spent some time at Nithyananda’s ashram out of academic curiosity, recollects, “He kept telling us not to use our minds. It’s a monkey that misleads, he told us.”

What else but complete control over the mind can explain the ineluctable hold India’s godmen have over their devotees? So much so, grievous accusations of colossal financial transgressions, rape and child abuse, even murder do not seem to diminish their faith. On the contrary, in the case of Asaram Bapu, a godman mired in controversy and recently arrested by Rajasthan police on charges of sexually assaulting a 15-year-old girl, they seem to shore up their belief in defiance.

As Asaram evaded imminent arrest, throngs of his followers gathered at Jantar Mantar in Delhi to push for his release and sounded the battle-cry from a makeshift stage. “Our fight will go on until the conspiracists give up trying to tarnish Bapu’s image. We should send a clear message by amassing at the next satsang in such large numbers that there should be no place left for us to sit,” said one, to loud roars of approval from the crowd. “Our victory is certain. Only then will we leave,” exclaimed another devotee. “I have not eaten a thing in 48 hours, but gurudev is giving me the strength to go on and I can for another five days.” At Jantar Mantar, they spend most of their time chanting ‘Hari Om’; in other places, Asaram’s devotees have blocked roads and railway tracks and even assaulted media personnel.

Godmen and controversies have been bedfellows for long in India but this poses no threat to their cult appeal (see box for some of our flourishing gurus and the controversies associated with them). At the Jantar Mantar demonstration, an Asaram devotee from Himachal Pradesh began to tell Outlook of his indebtedness. “Even if Lord Shiva himself appears and tells me not to believe in Bapu, I will tell him I cannot give up. I know what I have gained from him. He has saved me from committing suicide. So, even if he kills off the entire world, Bapu will still be god for me. It’s another matter that he will not do something like this,” he says, before he’s whisked away by other followers angry with the media. Asked what was so special about Asaram, Akanksha Bhatnagar, a 20-year-old mca student from Delhi, gushes with a twinkle in her eyes, “You will realise when you come to one of his sermons. I have no words to express.” For his devotees, Bapu is akin a body of water—you can thrash him as much as you want, there will be a few splashes, but nothing that will affect him. “I am sure he will come out shining even brighter after this episode,” Bhatnagar adds. Ask devotees of other godmen, like Sai Baba, Ramdev, Jayendra Saraswati or Nirankari Baba, and

How is it that godmen manage to win such unquestioning submission? Interviews with devotees, some of whom have fallen out with their gurus, detail an elaborate spiel that gurus have in place to control a devotee’s free thinking capabilities. The initial assault on independent thinking often comes with sleep deprivation: devotees are often allowed no more than four hours of sleep. What is thought of as a part of the frugal character of ashram life actually undercuts a devotee’s critical thinking. This is combined with a heavy work schedule and unreasonable deadlines that overwhelm a person’s routine. “This just doesn’t leave any time for you to sit and reflect. And the moment you do, you fall asleep,” says Anushka Gopal (name changed on request), a Bangalore-based woman who spent five years at the ashram of a popular south Indian guru but chose to walk out after his sexual misconduct was caught on tape.

Another cog in the brainwashing machinery is a pseudonym that goes on to become the ‘real’ identity of the person. The change is subtle but its long-term impact is drastic when it comes to erasing a devotee’s past. This is demonstrated effectively in the case of 35-year-old hotel management guru Santosh, now known as Shantimayananda after “great healing and transformation”. His parents unsuccessfully petitioned the Karnataka High Court to have him come back from Nithyananda’s ashram in Bidadi, where he has been living for six years now. “He has no concern for his mother and father, he simply thinks Nithyananda is god,” says Munnur Krishnamurthy, his distraught father.

The next stage is to have older devotees perpetuate the guru’s aura and suppress an acolyte’s individuality. What the group believes is what you should believe, they are told. Meanwhile, the guru does his bit by instilling the ideal of gurubhakti and the fear of gurudroha. “He kept brainwashing devotees by saying all sins can be forgiven—but not gurudroha,” says Hemmige. To add more enigma to their aura, several of them even take to dressing as gods—Nithyananda often pretends to be Shiva-like and Asaram and Kripaluji takes on a Krishna-like get-up. Prabir Ghosh, a noted rationalist from Calcutta who claims to have taken on several hundreds of godmen, says all of them inevitably make claims of possessing some supernatural power—another important component in their marketing strategy. Rationalists argue that what is merely a placebo effect is often touted as a miraculous cure. One devotee at Jantar Mantar said Asaram cured her mother of breast cancer. Devotees also seek to protect their belief (and thus self-interest) by perpetuating the guru’s cult and refusing to buy into accusations of wrongdoings. “For them it’s not an issue of right or wrong,” says Indira Sharma, president of the Indian Psychiatric Society. “It’s as basic as protecting the one who protects you. It’s all what matters to them.”

Many followers come from a religious background, exposed to a reverential following of gurus. Then there are some hapless souls who submit to faith afresh. But the well-oiled machinery at ashrams is powerful enough to work on the minds of those with advanced degrees in science (who often possess a fine streak of credulity) or even without any of the circumstantial or emotional baggage that makes some people prone to unquestioning submission to a strong guru figure. “To the more sceptical devotees, the guru would say don’t believe what he says. When we realised he was not trying to sell us his ideas, we became more receptive,” says Gopal, who studied at top engineering institutions in India and the US. “All this while, I had no idea I was being subjected to psychological slavery. It’s a kind of mind trickery,” she adds. It took her six months to realise her guru could be wrong. The revelation of the sex tapes was what finally led her to walk out of the ashram.

There is also the obvious influence that money power can bring for these gurus. Lenin Karuppan, who is now acknowledged as the whistleblower who leaked the sex tapes that allegedly feature Nithyananda and a Tamil film actress, recounts how he himself once helped snuff out dissent as the publications-in-charge for the guru. When Nakkeeran published an article that the guru deemed unfit for the public, he rushed to Tamil Nadu, and along with Nithyananda’s followers, he bought about a lakh copies and burnt them. But even he has words of praise for Nithyananda’s “mesmerising oratorical skills and knowledge of Hindu religious texts”.

Katharina Poggendorf-Kakar, a Goa-based scholar who has studied godmen in India, says devotees often attribute exaggerated positive qualities to their guru—unlike adults in a mature love relationship, who are in touch with their partner’s realistic qualities and failings. “They deny unwanted characteristics that cause a ‘split’ in the mind. The disciple longs to merge into a good and powerful, wise and perfect self-object—which is the guru. In other words, the guru is great, and thus, participating in his power, I am great too,” she elaborates. “The violent outbreaks by stern believers in support of their guru, as we have seen in Asaram’s case, are linked to this: accepting that the idealised self-object has failed means also accepting one’s own failure, which might lead to a disintegration of the self, which needs to be fought off by denying any (countering) facts and better knowledge.”

It’s not difficult to imagine that perhaps it is this systematic domination of the mind of the devotee that lay behind a poster at a Jantar Mantar that read, “Nigorey bhi kah rahey yeh baat, bapuji hai paak saaf (Even the most stubborn proclaim that Bapu (Asaram) is squeaky clean).” 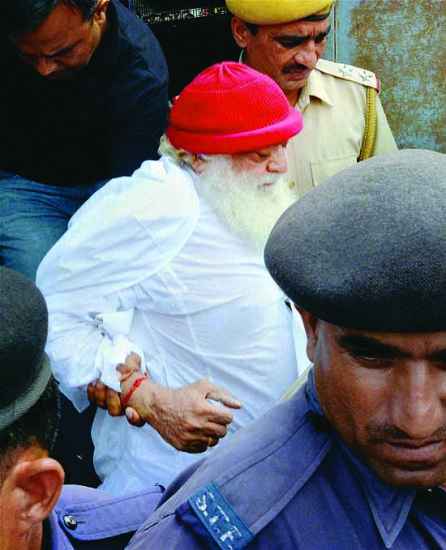