The least of these : The Graham Staines story | Sikh Philosophy Network
Menu
Log in
Register

The least of these : The Graham Staines story 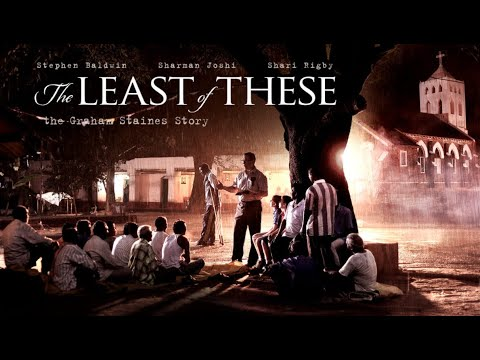 This is an English language movie made by Americans on a barbaric hate crime that took place in India in 1999---the burning alive of Australian missionary Graham Staines and his two sons by Hindu chauvinists who believed that Staines was paying money to poor tribal people to convert to Christianity . The central event of the movie is real of course , but the movie is a fictionalised account of that .

However Manav directly confronts Graham , who denies using money to convert Indians . Manav gets to closely observe the work that Graham is doing curing leprosy patients in India and soon realises that Graham is doing a commendable job serving these patients who are pariahs among their own people after having contracted leprosy . Graham is the only person willing to touch them and give them any shred of dignity and hope . Of course Graham admits that he hopes that they will convert , but without money inducements it is not illegal at all . Manav tries to find out evidence that people are being converted by fraudulent means but finds no such thing .

During his research Manav comes to realise that a man named Mahendra ( Manoj Mishra ) is ready to take Staines' life and goes to warn Staines of this , but too late....Mahendra and his goons have already committed the deadly crime of burning alive Graham and his two small sons Timothy and Philip . Manav is affected by the dignity with which Gladys forgives her husband's killers , and by the fact that Graham's son had begun to believe himself to be an Indian and dreamt of becoming a cricket player not of Australia but of India like Sachin Tendulkar the Indian cricket star .

Also Manav comes to realise the motive of his newspaper editor in having a hatred towards Graham ; he is son of a leprosy patient that Graham allegedly converted to Christianity . But the patient says that he never converted to Christianity and opens Manav's eyes . Manav then goes to press in another newspaper telling the truth about Staines and the false allegations his earlier editor was making , thus resulting in the editor's expulsion from his job . Gladys goes on to continue her husband's work and she and her husband are duly recognised by the Indian government and given civilian honours .

The movie furthers India's image in the west as not only being poverty afflicted but also leprosy afflicted , and this forms a most unwelcome image . Of course , the movie gives a one sided picture as it has been produced by American Christians . Was Graham Staines really using money to convert the downtrodden ? God knows , but certainly burning him and his two young sons alive was unforgivable .

Acting and emotions wise , the movie scores and has a sentimental effect on the audience . Photography and colours are decent . Music wise , the movie again does very well and the music does a good job of heightening the emotional aspect of the movie .

Four stars out of five .

This is how religions are today :

A Christian will say nobody goes to the father except through me/christ.

A Muslim says Allah is greatest and Mohammed is his final messanger.

A jew will say nothing but will dismiss everything said by everyone else internally.

A hindu will say all your religions are a branch on the tree of Hinduism.

A Buddhist will laughingly agree with everyone but still remain a Buddhist.

A Sikh is tired and has lost the will to say anything.

Hindutva, RSS etc suffer from an extreme form of inferiority complex, their very foundations are built on rubble. They will succeed to a point and then collapse if left to their own devices. Fighting them just prolongs their timescale to annihilation. Sikhs have to rejoin the tapestry of the subcontinent, helping to bond the mosaic back together which has been splintered by communal efforts.

There is a subliminal anticipation in the mindset of hindu chauvanists that no matter what progress is made socially, scientifically, technologically etc they adhere always to the same position "How long before Decadence /Decay?" This mindset is in and of itself the decay in society, this subliminal anticipation exists in other communities too, religious or not, but finds its most significant expression amongst Hindu groups. They hunt down perceived degradation as evidence for supplanting secularism with Hindu rashtra. The simple fact remains that progress is occurring in this world and that progress cannot be halted by people with mental health issues which is what this boils down to.

Gone a bit off track, I'm sure the film is worth watching I won't I'm too sensitive to watch these things.
Last edited: Apr 17, 2019