Finally talking about June 1984—30 years later—will honor the dead and protect the living.

Thirty years have passed since journalists were cut off from Punjab, and Punjab from the world. In June of each year, Sikhs throng to gurudwaras to observe one of the most significant of their religious holidays. On this day, when even the less observant find their way to gurudwaras, the Indian Army attacked Darbar Sahib—the Golden Temple, the Sikh Vatican —and dozens of other gurudwaras across the state. 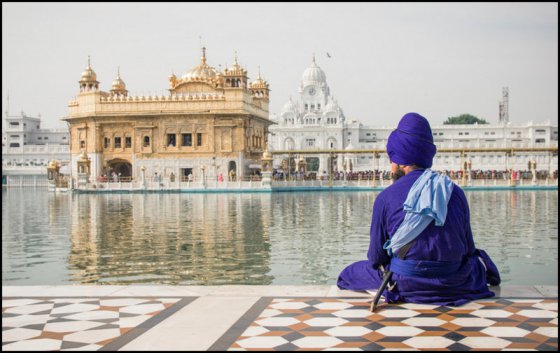 An estimated ten thousand never returned to claim their shoes from the entrance to the Darbar Sahib. That the exact number of civilian casualties remains unknown signifies precisely why June 1984 is relevant today. More so, in light of India’s May 2014 election and the fierce debates it raised about the status of India’s minority communities.

The army’s operation, code named “Blue Star,” began with the forced eviction of all foreign journalists from Punjab. This, coupled with a state-wide curfew enforced by soldiers, limited the documentation of the civilian experience. However, the people’s memory of these events has been preserved successfully.

The events come flashing back to anyone alive in Punjab in June 1984: shoot-on-sight orders to lock down an entire state’s citizenry.

Three decades after the attack on India’s 2 two percent Sikh minority, the events come flashing back not only to eyewitnesses and victim families, but anyone alive in Punjab in June 1984: shoot-on-sight orders to lock down an entire state’s citizenry for days hardly prevent (and in cases hasten) pregnant women needing delivery rooms; patients needing doctors; dead needing crematoria. One family relayed what they had witnessed on June 6, 1984 after finally receiving special permission from the Army to take their elderly father’s body to a crematorium: “stench of putrid and burning flesh… bodies had all been brought there by dust carts and from the number of carts; the attendant estimated some 3,300 had so far been cremated.”

The people’s counter-memory to the official narrative has been repeatedly validated, injecting longevity.

India Today opined, “Never before were the champions of civil liberties in India in such dire need of liberating themselves from the clutches of the law.”

In June 1984, even as the government closely orchestrated the return of foreign journalists a fortnight later for a special tour of the Darbar Sahib after a hurried clean-up, a young Associated Press journalist, who had managed to stay in Punjab during the attack, had already filed: at least 1200—twice the government’s number—deaths in Amritsar city alone, killings by close-range shots of Sikhs with their hands still tied behind their backs, and subsequent dumping of bodies into garbage trucks.

A year later, in 1985, Indian civil liberties group Citizens for Democracy and distinguished jurist V.M. Tarkunde published findings of “sadistic torture, ruthless killings…calculated ill-treatment of women and children.” As the Government banned the report and arrested its authors and publishers, India Today opined, “Never before were the champions of civil liberties in India in such dire need of liberating themselves from the clutches of the law.”

Why does public conversation about June 1984 sputter to a stall in Indian circles?

In 1995, anthropologist Joyce Pettigrew, having studied the killing fields of Punjab in 1992-94, summarized her fieldwork in Punjab: “The Army went into Darbar Sahib not to eliminate a political figure or a political movement but to suppress the culture of a people, to attack their heart, to strike a blow at their spirit and self-confidence.”

And memory-keeping was a burden not even anticipated by the Sikhs, as world media stood outraged by the events. A “virtual massacre” reported The Guardian; “whole of Punjab…turned into a concentration camp” declared the Christian Science Monitor; and when the Indian government issued arrest warrants for AP’s journalist, the New York Times joined others in vociferous protests, asserting that his only crime was “doing his job too well.”

Despite all this, why does public conversation about June 1984 sputter to a stall in Indian circles? At most, it revolves briefly around the collateral of a firefight between the Army and Sikh leader Bhinderanwale’s men who put up a stiff fight for three days in Amritsar. Suggestions for greater truth-telling about civilian losses again render Sikhs as suspects, illustrating political and societal immaturity.

June 1984, and the subsequent anti-Sikh pogroms across India (organized post Indira Gandhi’s assassination), were followed ominously by the responsible Congress Party winning a national election victory. This landslide is still unprecedented in Indian history, May 2014 victory of another Party accused of pogroms notwithstanding.

Noting what happened after the June 1984 firefight highlights at least three legacies of June 1984 that are all the more relevant to India in 2014.

It is thirty years overdue to speak of those who slipped off their shoes for a moment of solace in a place of worship and walked instead to a brutal death.

First, the attacks in June removed forever the erstwhile barrier in the Indian psyche of attacking faith centers. “Nothing was sacred anymore, everything was permitted” wrote Ivan Fera in the Illustrated Weekly of India, 1984. This has been demonstrated since, perhaps most symbolically in the public destruction of a Muslim mosque in 1992, resurgent calls to build a Hindu temple on the land, and attendant riots. The Committee to “liberate” the land where the mosque stood was first convened in winter 1984.

Second, the attacks of June 1984 signaled to the nation that entire communities marked as ‘enemies within’ were undeserving of even humanitarian protection. The Red Cross was stopped just a few miles away from Darbar Sahib, ironically at the historic Jallianwala Bhag, site of the massacre of Punjabis struggling against British colonists in 1919, sixty-five years before facing Indian guns in Amritsar. Pilgrims trapped in the hostels on the eastern side of the Darbar Sahib complex, the other end from where Bhinderanwale and his men were lodged, were rounded up, seated in the courtyard and fired upon. “Many wounded were left to bleed to death,” wrote Amrit Wilson, in the New Statesman in November 1984. “[W]hen they begged for water, army [men] told them to drink the mixture of blood and urine on the floor. Four months later no list of casualties or missing persons had yet been issued.” This list has yet to be seen.

Third, the attacks of June 1984 sanctioned destruction of difference. Turbans, Sikh markers, were removed before killing and women were made to watch before they themselves faced emblematic violence—this received markedly more attention when it happened on the streets of Delhi in November 1984, the “ripping apart” of children and gang rape of women, as noted by Delhi-based human rights groups. Further, the Army’s burning of the Sikh Reference Library after the June firefight is held as an attack on Sikh psyche. The centuries-old, primary source documents that were housed in the building where no firefight ever took place remain shrouded in mystery even today: since June 1984, Sikhs have claimed—and a 2004 Indian Government revelation even quietly acknowledged—that the materials were taken by the forces and not destroyed, but also not returned as a marker of humiliation and attempt at erasure of heritage.

Refusing to speak about June 1984 has meant missed opportunities and acquiescing to dangerous trends. Even if the polity is not ready to honestly discuss the firefight between the combatants, it is thirty years overdue to speak of those who slipped off their shoes for a moment of solace in a place of worship and walked instead to a brutal death. When the children of 1984 begin to wake up from the parents’ nightmares, the parents of 2014 may learn to prevent future darkness.

Mallika Kaur is a lawyer who focuses on gender and minority issues in the U.S. and South Asia. She has a J.D. from The UC Berkeley School of Law and M.P.P from Harvard Kennedy School of Government. She is volunteering with the 1984 Living History Project this 30th anniversary year.


The Gurbani Framework is a response to a variety of distorted translations...