Story Of Bravery & Sacrifice - The Battle Of Chamkaur 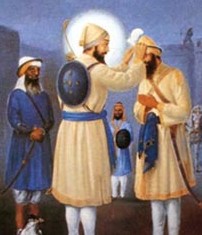 (KP) -
Evacuation of Anandpur Sahib
Guru Gobind Singh jee and 400 Sikhs left Sri Anandpur Sahib on the bitter cold and rainy night of December 5 1704 after a prolonged siege by the Mughal and Hindu Hill chieftains’ armies. The Mughals and Hindu Hill chieftains had offered Guru Sahib a safe passage to leave Anandpur Sahib on an oath on the Qu'ran by emperor Aurangzeb and an oath on the cow (which Hindus consider as sacred) by the hill chieftains. However, their oaths were meaningless and they betrayed Guru Sahib.
In the early hours of the morning at the river Sarsa, the Guru and his Sikhs were attacked by the Mughal army under the command of Wazir Khan, breaking their oath of assuring safe conduct. In the confusion, which followed the attack in the cold and darkness, many Sikhs became Shaheed (martyrs). A group of Singhs fought the armies and kept them back while the rest of the Sikhs, Guru Sahib and Guru Sahib’s family crossed the river in the heat of the battle. Many Sikhs perished in crossing the cold river and got swept away by its current. During the confusion in crossing the River Sarsa, Guru Sahib was separated from his family. Guru jee, his two eldest sons and 40 Sikhs were able to cross the river and were united on the other side. Gurdwara Parivar Vichora Sahib is built on the spot where the battle occurred and the Gurus family were separated.

Chamkaur Sahib
On 20 December 1704 Guru Sahib and the 40 Singhs camped in an open space in Ropar. Bhai Budhi Chand who owned a Haveli (open house) in the town of Chamkaur visited Guru Sahib and offered his home and family at the feet of the Guru. Guru Sahib had once visited the mud-house of Bhai Budhi Chand when returning from Kurekshetr. Guru Sahib and the 40 Singhs moved into house of Bhai Budhi Chand situated on a hill, which now became the mud-fort of Guru Sahib.
At the commencement of Amritvela (early hours of the day before sunrise) Guru Sahib woke up Bhai Sangat Jee. “Wake up Sangat Singh, its time for Aasa Di Var. Let’s do Keertan,” Guru jee said. What an amazing warrior Guru jee was! An army of 100,000 are pursuing Guru Sahib and planning to attack the place where they are staying, and Guru Sahib is still blissfully continuing his routine Rehat of Nitnem and Aasa Di Var Keertan with all Singhs joining in. Nawab Wazir Khan, announced outside the fort of Chamkaur, “Gobind Singh! If you and your Sikhs come out now, you will be spared!” Guru Sahib replied to this with rain of arrows. There was silence now in the cold morning. Clouds filled the sky followed by thunder and lightening. Guru Jee and the Singhs became ready for the battle.

Preparing for Battle
There was a chill in the air and morning had not yet come. A Mughal messenger came to see Guru Sahib to negotiate with Sikhs. However, Guru Sahib told the messenger to go away or face death. Inside the four walls of the mud-house Guru Sahib declared war.
First one Singh came out and when he was about to become Shaheed (martyr), he roared the Jaikara (slogan) of “Sat Siree Akal!” As soon as the sound of “Sat Siree Akal” echoed throughout the battlefield, the next Singh came out to fight in the battleground. The Nawab was astonished at what these Singhs were made of. One Sikh equalled Sava Lakh (125,000).

Baba Ajeet Singh Jee Goes To Fight
Baba Ajeet Singh jee now went before Guru Sahib. "Dear father, permit me to go and fight on the battleground and grace me with the oppurtunity to make my life fruitful and worthy in your service.” Guru Gobind Singh jee hugged his beloved son and gave him a Shastr (weapon). A beard or moustache had yet not grown on Baba Ajeet Singh jee’s face, showing how young he was. Every father wants to see their child get married, but this was the time of fighting the enemy. Death was waiting and today Baba Ajeet Singh would be marrying death.
The sun was about to come out. Guru jee saw that Nawab Wazir Khan wanted to take hold of the fort of Chamkaur in one attempt. The Nawab surrounded the fort with his armies. At this time the Singhs did a benti (request) to Guru Sahib that since there was no means of escaping the siege, for him to please escape with Sahibzadey. However Guru Sahib told them that there is no difference between the Singhs and the Sahibzadey. “You are all mine! We will be victorious and we will all be free.”
Baba Ajeet Singh jee boldly and valiantly came out of fort, accompanied with 8 other Singhs, which included one of the original Panj Piarey, Bhai Mohkam Singh jee. Guru jee watched the battle scene from the top of the fort. There was silence on all four sides. As they came into the battleground they roared Jaikarey, which sounded everywhere like the roar of a lion. Today the 8 Singhs felt proud that under the leadership of Baba Ajeet Singh jee, they had been blessed with an opportunity to fight at his side. Baba Ajeet Singh jee advanced on the battlefield and displayed weaponry skills with great courage and bravery. The army surrounded the Sahibzada on four sides. Baba Ajeet Singh called out, “Come nearer if you have courage.” The soldiers ran away frightened. Now they come back in a larger group as not a single one of them had the courage to individually fight Baba Ajeet Singh ji.

The Singhs' weaponry skill on the battlefield reminded the Mughal soldiers of Allah, and they feared for their lives. While fighting, Baba Ajeet Singh jee’s Kirpan (sword) broke. He then began to fight with a Neja (spear). However, while killing one Mughal chief, it became stuck in his chest. Even then, Baba Ajeet Singh jee remained in bliss and peace. While fighting, all 8 Singhs became Shaheed (martyrs). One Mughal chief injured Baba jee’s horse. As a result, he fought on the ground with his talwar (sword). With each blow of the sword, he split the enemy into two. When he struck the enemy twice with his sword, they got cut up into four pieces. Now as the army surrounded Baba jee, Guru jee watched. When Baba jee attained Shaheedi, Guru Sahib roared a Jaikara of “Sat Siree Akal.”


Baba Jujhar Singh ready for Shaheedi
The news of Baba Ajeet Singh jee attaining Shaheedi (martyrdom) spread. Hearing the news of his brother, Baba Jujhar Singh jee now desired to fight in the battlefield. He asked Guru Sahib, “Permit me, dear father, to go where my brother has gone. Don’t say that I am too young. I am your son. I am a Singh, a Lion, of yours. I shall prove worthy of you. I shall die fighting, with my face towards the enemy, with the Naam on my lips and the Guru in my heart.” Guru Gobind Singh jee embraced him and said, "Go my son and wed the life-giving bride, Death.” Guru Sahib gave blessings to Baba Jujhar Singh jee just a father gives blessings to the bride on the day of her marriage. Guru jee added, “I asked my father to give his life for "dharam" (righteousness and justice). Today, what I told my father, I now tell you.” Bhai Himmat Singh jee and Bhai Sahib Singh jee (two of the original Panj Piarey) along with 3 other Singhs accompanied Sahibzada Baba Jujhar Singh jee. The Mughals were shocked at what they saw. It looked as if Ajeet Singh had come back.

Fighting Til The Last Breath
Dead bodies lay everywhere. The army assembled to kill Baba Jujhar Singh jee. He was now surrounded and had a Neja (spear) in his hand. Wherever the Neja hit, the enemy was destroyed. He also used a Khanda (double-sword), with which he killed the enemy as a farmer mows down his crop. Guru jee saw that Baba jee was being surrounded and the opportunity to kill the Mughal soldiers was decreasing. So Guru Sahib fired volleys of arrows in the air. In the army they call this ‘Protection Fire.’ The person providing Protection Fire must be very skillful and precise because if the target is missed, people on the same side can be killed. Guru Sahib gave Protection Fire with arrows, but none of the 5 singhs or Baba jee were hit or injured by the arrows. Baba jee and the 5 Singhs demonstrated the Sikh concept of one equalling “Sava Lakh” (125,000).

Baba Jujhar Singh eventually was able to break the ring of the Mughal army soldiers surrounding him. Baba jee then attained Shaheedi.

ਪੁਰਜਾ ਪੁਰਜਾ ਕਟਿ ਮਰੈ ਕਬਹੂ ਨ ਛਾਡੈ ਖੇਤੁ ॥੨॥੨॥
purjaa purjaa katt marai, kabhoo na chhaadai khet. 22.
They may be cut apart, piece by piece, but they never leave the field of battle. 22.
(Ang 1105, SGGS)
This was the sign of a true warrior! By the time Baba Jujhar Singh jee had attained Shaheedi nightfall had arrived and the moon could be seen in the sky. Guru Sahib wrote in his composition, the Zafarnama:

Editors can be reached at editors@panthic.org
Source:Panthic Weekly: Story of Bravery & Sacrifice - The Battle of Chamkaur