Ludhiana, September 24
The region may be struggling hard to improve the declining sex ratio, but as far as getting the benefits of higher education are concerned, the girls have outnumbered the boys
in Punjab.

The current data (2009-10) available with the state government shows that 2,42,190 students are getting higher education in all the streams (humanities, medical, non-medical), out of which 54 per cent are the girl students while 46 per cent are the boys.

As per common notion, boys do not take up higher studies seriously due to which girls have surpassed them in every field. The boys have been dominating the girls only in engineering courses where their percentage is 75 per cent against the 25 per cent of the girls.

Head of the Economics and Sociology Department at Punjab Agricultural University Dr MS Sidhu said there was a need to change the mindset of the society against the girls, as the latter had proved their mettle in every field.

“Instead, they are becoming so qualified that parents are finding it difficult to find a suitable match for them. To be compatible with them, boys need to get respectable higher education,” said Dr Sidhu. 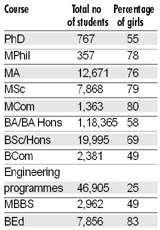