SPNer
Pilgrims descended from all over the world on a small town in Pakistan that is home to one of Sikhism's holiest sites this week, dipping into holy spring water and solemnly offering prayers. They have come from India, Britain and the Middle East to the Panja Sahib Gurdwara in Hasan Abdal, 55 kilometres (35 miles) from Islamabad, where Guru Nanak, the founder of the religion, is said to have imprinted his hand. 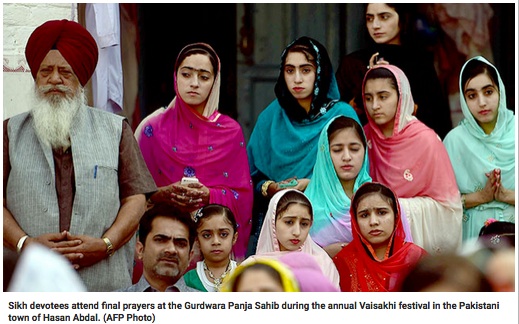 But for Pakistani Sikhs, who mainly live in the country's restive northwest, this year's celebrations are also a time of healing after six murders during August and September that have left their community in fear.

The 500-year-old religion was founded in what is now part of Pakistan, a Muslim-majority country of nearly 200 million people. Most Sikhs left Pakistan for India after both countries gained independence from Britain in 1947.

Around 20,000 Sikhs remain in Pakistan today, most in the country's restive northwest, which has been rocked by an Islamist insurgency for more than a decade, forcing many to leave their homes in the tribal areas on the Afghan border for the city of Peshawar. 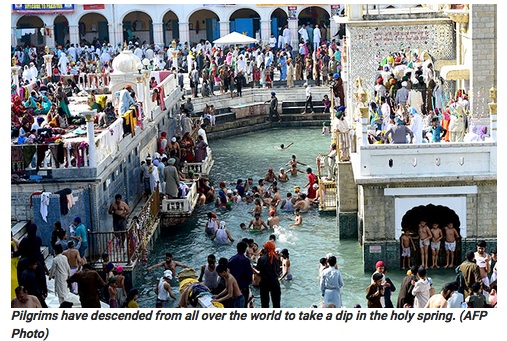 There, they have set up businesses and often work as traders, their men instantly recognisable by the distinctive untrimmed beards and high turbans that distinguish them from their Muslim counterparts.

They have earned a reputation for uprightness and have many loyal customers who praise their honesty. But their peace was broken in the second half of last year with a spate of killings targeting Sikh traders and many are now considering leaving.

'Long before Pakistan'
From his spice and groceries shop in Peshawar, Harcharan Singh, 22, witnessed one of the killings last September -- that of his friend Harjeet.

"It happened in front of me. The man came, shot him and left quickly (on a motorbike) before anyone knew what was going on," he said.

His father, Harbhan Singh, a mountain of a man with a majestic red turban, recalled peaceful times in his beloved home where he says Sikhs were well respected and unmolested.

"We have been here long before the creation of Pakistan, before the British period. Since then, we had no worries," he said from the small living room at his home in Peshawar, flanked by Harjeet's two red-headed daughters.

Singh, who speaks only the Pashto language of the region and not the Punjabi that Sikh holy texts are written in, said his family was struggling to make sense of what happened.

They had no enemies, he said, and were now relying on their savings to get by because they had closed the shop out of fear.

"You can't predict about the customer whether he is a friend or enemy. You could be an enemy for all I know," he said.

Back at one of the city's two remaining Sikh temples still in use, high fencing, CCTV cameras and two policemen have been deputed to protect the place of worship for the first time in its history.

Greater visibility
The killings have left police clueless and officially there are no leads in any of the cases.

Rabia Mehmood, a researcher on minorities at the Jinnah Institute in Islamabad, said military operations against the Taliban that displaced millions of Pakistanis in the past decade have clustered Sikhs in major cities, increasing their visibility and making them more vulnerable.

"It's actually a reflection of what has been happening to other minorities -- Sikhs have become part of that group in the way that they are targeted," she said.

"Their concern is that the security situation is bad, they are visible and (certain groups) do not want to see minority groups flourishing at all." 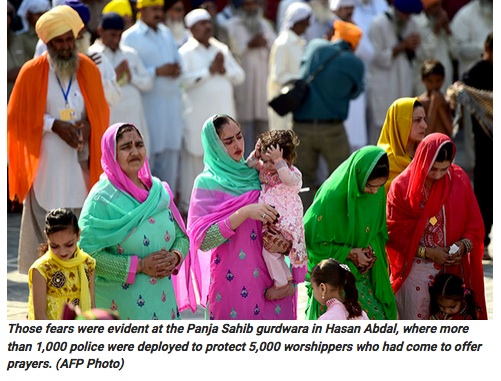 For some such as Bhagwant Singh, a 77-year-old shopkeeper from the Indian city of Amritsar who had made the pilgrimage along with his wife for the first time in their lives, the journey has been peaceful.

"I wanted to see this place in my lifetime and now I feel at peace," he said, adding that he was very happy with the hospitality shown by local authorities.

But many of his Pakistani counterparts do not feel the same way.

"We want the government to either improve security for us or else shift us elsewhere, this is our appeal," said Harcharan Singh, the Peshawar trader.

He said he had even considered leaving the country.