Melbourne, Australia (February 03, 2013): As per media reports Simarpal Kaur became the first Amritdhari Sikh woman to serve in the Police force with her Dastar in Australia. 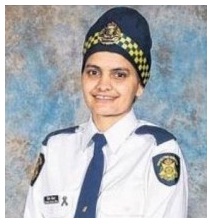 “Originally from Moga District, Village Deena Sahib, she left Punjab in 2007 to study in Australia. She attended Queensland University and received her Masters degree in Information Technology” The Link has reported.
“After graduating from the Victoria Police Academy she has been assigned as a protective service officer. This is a great achievement not only for her but the entire Sikh Community.” the report added.
Whereas in other countries, including Canada, there have been many hurdles for those aspiring to serve in this profession with their turbans but in Australia this has been achieved relatively with ease.
Share:
Facebook Twitter Reddit Pinterest Tumblr WhatsApp Email Share Link