Sikh groups have urged US President Barack Obama not to avoid visiting the Golden Temple in Amritsar during his India trip next month, amid reports he is now unlikely to go there.
A US official told the BBC there were "logistical" issues.
Mr Obama would need to cover his head to enter the temple and there are reported concerns opponents would use this to show he is a closet Muslim.
The Golden Temple, or Harmandar Sahib, is Sikhism's holiest site.
Continue reading the main story Related stories

Sikhs have been urged to use social network sites to press Mr Obama to go ahead with the visit.
'Support and guidance' A US official told the BBC there had never been a final decision to go to the temple but conceded that it had been planned as a possible place for Mr Obama to visit.
The official said it was not definite that Mr Obama would not visit, but that it was unlikely.
Correspondents say that it had earlier been strongly hinted that Mr Obama would visit, and it appears the White House has not done its homework on the Golden Temple and the requirements and sensitivities associated with entering it. 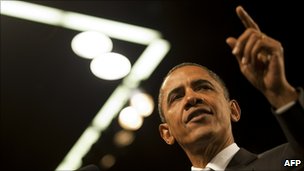 Sikh officials said a simple cap for Mr Obama would suffice
Officials at the temple said that although heads needed to be covered, a simple cap for Mr Obama would suffice.
Hansdeep Singh, a senior staff attorney for the United Sikhs lobby group, said: "If these rumours are true, this is a tremendously disappointing moment for the entire Sikh community and religious minorities in general."
One Indian foreign ministry official told Agence France-Presse news agency an advance team of US diplomats had prepared the temple visit.
"We provided them with all the support and guidance they needed but now it is for US officials to decide whether Obama should go to the temple or not," the official said.
Mr Obama is a Christian, but a Pew Research survey of 3,003 Americans in August showed that 18% believed the president was a Muslim.
The poll found beliefs about the president's faith were closely linked to political judgements about him. It found that people who believed Mr Obama was a Muslim "overwhelmingly disapproved" of his job performance.
The United Sikhs group said that if Mr Obama did not visit it would be "a missed opportunity".
It said: "We implore the Sikh community and all others concerned with raising the visibility of religious minorities [to write and express], in a respectful manner, how important it is for President Obama to visit Harmandar Sahib through the White House's Twitter and Facebook sites."
Share:
Facebook Twitter Reddit Pinterest Tumblr WhatsApp Email Share Link