Sikhs Living In Shanty Towns And Streets In UK

Absolutely terrible conditions of these people:

The illegal immigrants desperate to escape squalor of Britain 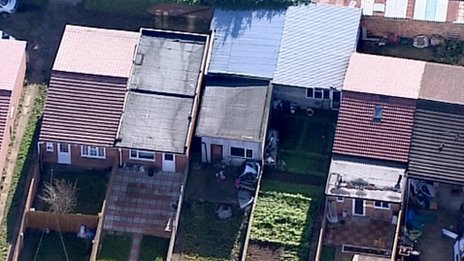 They came to Britain illegally in search of a better life, but the reality turned out to be far removed from what they dreamed of.
The BBC has spoken to illegal immigrants who find themselves living amongst rats and rubbish in makeshift garden sheds and garages. They want to be deported back to India, but many are trapped in a bureaucratic no man's land without any documents.
Jagdeesh pulls away a piece of cardboard revealing a tiny hole in a concrete wall. He invites me to climb through, declaring: "This is my home, come in."
As I crawl into the derelict garage in west London, the torchlight reveals half the roof is missing, a floor littered with rubbish, and rats scurrying away.
The 22-year-old illegal immigrant jumps on to a mattress in the corner. His makeshift bed is protected from the elements by plastic sheeting.
Jagdeesh's family paid £10,000 to traffickers who promised a better life and smuggled him from India to Britain with dozens of others in the back of a lorry.
Voluntary returns "I was told that life was good here. It's not just me, other boys came for work," he says. "You can see what state we're in, there's no work, no government help."
Jagdeesh has cut himself off from his family, saying he is ashamed of his failure to find work and would rather they thought he was dead than knew he was living in filth.
"They sold land and took out loans to get me out of India. What can I say to my family back home? The money we've invested is lost," he says.
Out of work, penniless and 4,000 miles from home, Jagdeesh has handed himself in for deportation.
Voluntary departures from the UK to all countries have risen steadily over the past six years, from 335 in 2005 to 15,537 in 2010, before falling to 12,879 in 2011, Home Office figures show.
Continue reading the main story Voluntary returns from the UK

It is barely dawn as Jagdeesh and hundreds of other illegal immigrants from India descend on a car park outside Southall train station in west London.
They stand in silence, shivering in the bitter cold. This car park was once a busy pick-up point for cheap illegal workers before the work slowed down in the economic downturn.
It is mid-morning by the time a van swings into the car park. Suddenly dozens of men rush towards the driver's window offering their skills, shouting above each other.
"I make a good plumber," shouts one. "I work hard boss, 12 hours for £20," shouts another.
Several men scramble for a place in the back of the van, pushing others out of the way, then the van speeds off. For those left behind, there will be no more offers of work that day.
Surinder, 33, also from Southall, arrived in the UK more than 10 years ago. There was a time when he made £300 a week working six days as a heating engineer, but he is now living in the poverty he came here to escape.
He heads back to the home he shares with several other illegal immigrants - a tiny, poorly constructed building in his landlord's garden. Inside, there are three beds and a cooking area.
"We can barely make ends meet. It's been two months and we've only worked four days, what can we do?" he says.
Continue reading the main story “Start Quote

Nobody listens to me... I have nothing left to live for”
​
Buta Southall
He throws his work overalls on to a scruffy sofa as if to show his frustration.
"We have to pay the landlords, there are four or five us, and so we club together to pay it."
The rent is £800 a month. Landlords appear to be prepared to risk housing illegal immigrants for an inflated price.
They have been told not to open the door to anyone in case they are planning or immigration officials, but we obtained access by posing as volunteers offering food and blankets.
The immigrants complain of damp, cramped conditions, but being exploited by their own people angers them most.
"Our people who are here legally, permanent residents, who've made homes here, they've paid for their houses because of us," Jandeep says angrily.
"Their mortgages are paid because they charge a high rent. Everyone who lives here is Punjabi."
Row after row of terraced houses in this predominantly Asian area of west London are housing illegal immigrants in back gardens, creating slum-like areas.
Local councils estimate there are 10,000 sheds concealed from view across London and the Home Counties, lining networks of alleyways.
'Satellite images' Council planning officers and immigration agencies are using satellite images to document them.
But Ealing Council, which is responsible for the area we visited, is calling on the government for greater powers to inspect these buildings.
Local councils often have to give 24 hours' notice to landlords and tenants for inspection, which gives them plenty of time to clear evidence.
Sheds with beds are the last resort for migrant workers. Surinder plans to head back to India before he ends up on the street, even if he has to pay traffickers to help him.
"If I don't go back while I still have some money, it's over for me, then it's drink, drugs and no way home," he says.

Homeless communities camp out under motorways and canal bridges
We found many homeless communities sheltering in blankets and boxes in Southall under a network of motorway and canal bridges.
But like many illegal immigrants, they are stuck in a bureaucratic no man's land. Their traffickers instructed them to destroy their identity papers to make deportation difficult.
Now they are pleading to be sent back to India, but without their ID the process is slow.
Many have slipped into a destructive cycle of alcohol and drug abuse. Jaspal, 21, was jailed for shoplifting and is now back on the streets and back on heroin.
"I want to go back, they arrest me and I tell them 'Send me back', but they won't - because I have no passport - even though I spent one year in prison," he says.
"I can't sleep outside without drugs and I can't turn to my family for help. They spent thousands sending me here. It will cause too much tension."
Then Jaspal climbs under his blanket for one last hit to get him through the night.
Their only source of food and clothing comes from a local charity, the Sikh Welfare Awareness Team.
"They seem to be growing in number, the situation is getting worse but they have no choice but to live on the streets," says volunteer Randeep Lall.
"Their cases have been logged with the UKBA, but the Indian High Commission is dragging its feet. It's disgusting they are being left to live like this. It's a mess."
The UK Border Agency admits establishing the identity of illegal immigrants in order to issue them with emergency travel documentation can be complex.
A spokesman told the BBC: "The time it takes to obtain these documents varies and we continue to work with the High Commission of India to speed up this process."
Buta, who is in his 30s, has been waiting for three years. Each morning he cleans his teeth using a fresh water tap in the local cemetery.
Barely sober, he makes his way to Southall train station hoping to get work - he will take any wage to buy his next drink.
"I'd rather God took me, then I'd be okay. Nobody listens to me... I have nothing left to live for."