Heritage Sikhs: Legacy Of The Punjab At Museum Of Natural History

Sikhs: Legacy of the Punjab at Museum of Natural History 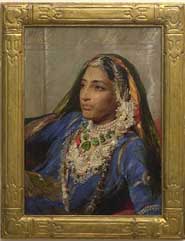 Rani Jindan by George Richmond, 1863. Oil on board. Kapany collection of Sikh art.


WASHINGTON, D.C.- The Smithsonian Institution’s National Museum of Natural History presents “Sikhs: Legacy of the Punjab.”The exhibition presents more than 100 pieces of Sikh artwork and artifacts produced from the 18th century to the present, including miniature paintings; arms and armor; traditional textiles and dress; coins; musical instruments; jewelry; sacred texts; and modern works of art. It also includes a scale model of the Darbar Sahib (commonly referred to as the “Golden Temple”), a Sikh sacred space at Amritsar, India. Many of these objects are on loan from private collections and will be on public display for the first time.

The exhibition, on view indefinitely, highlights the culture and history of the Sikhs, a people originally from the Punjab region (in modern-day northern India and Pakistan) whose religious, cultural, and artistic traditions have expanded with Sikh migrations around the world. There are approximately 250,000 Sikh Americans and their community roots date back well over a century. Sikhism was founded about 500 years ago and today has 22 million followers worldwide.

“This Smithsonian initiative to help preserve and celebrate Sikh heritage comes at a crucial time,” says Paul Michael Taylor, director of the museum’s Sikh Heritage Project and curator of Asian, European and Middle Eastern Ethnology at the Smithsonian. “Many Sikhs describe their religion as one that draws from both Islam and Hinduism, and they feel that their presence in these neighboring countries contributes to peace between them.”