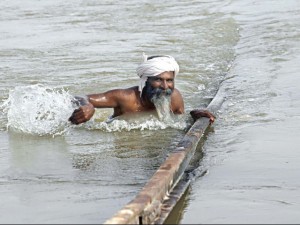 KARACHI: Arjun Singh left his village of Purana Sukkur because of the floods and came to Karachi towards the end of July. He has not received any support from the government but he does not blame anyone. “The life of a Sikh here is a very difficult one,” he says as if to explain his subdued resignation.
When Singh went to register for the Watan Card he was refused one on the grounds that his area did not rank among the flood-affected localities. His village was not flooded itself but water did enter the surrounding areas, which indirectly affected them. Singh is now living with around 40 other people in a makeshift shelter on an empty plot near the Baloch Hotel in Ghareebabad. He is paying Rs2,000 in rent per month. His family survives on just one meal a day, which is paid for by his 12-year-old son, who sells balloons.
“We’ll stay here for another 10 to 15 days,” he says. “Just enough to save the money that will get us back home.” Sikh representative Sardar Ramesh Singh said that they are extremely unhappy with government aid. Around 900 Sikhs came to Karachi, seeking sanctuary but very few were provided room at the relief camps. “They got hardly any special attention as a minority community,” said Ramesh. “The government does not have much to offer us.”
Ramesh feels that in the absence of a representation in the government, even the little money that is allocated for minorities never makes it to the Sikhs. Comparing the present government with others, he said that despite a large representation of minorities in the Pakistan Peoples Party government, the Sikhs are still neglected. “We feel more abandoned than we did in the dictator’s regime,” Ramesh says. He gives the examples of two men – Harcharan Singh from Nankana Sahib, who is now a captain in the Pakistan Army, and Gulab Singh from Lahore, who is now an inspector in the traffic police. Both inducted into government service in Musharraf’s era.
According to Ramesh, Sindh Minister for Minorities Dr Mohan Lal is “uncooperative” and selective in using his position. Take the Sindh government’s decision to give a five per cent job quota to minorities. This has not been implemented, especially in the case of Sikhs. Take a man like Satnam Singh, a “fine example”. The middle-school graduate was unable to secure even a peon’s job in the education department despite trying. If we do get jobs, it is a grade I job of a sweeper even for the educated Sikhs, complains Ramesh.
For the 5,000 Sikhs scattered in Saddar, Ranchore Line, DHA, the cantonments and Gulshan-e-Maymar, only one of the four gurdwaras of the city is in a usable condition. Small wonder then that Ramesh feels that unless there is Sikh representation in the government, they will continue to be neglected. He feels that if a minister is appointed from one of the religious communities, the rest of the communities are bound to suffer. Source: The Express Tribune