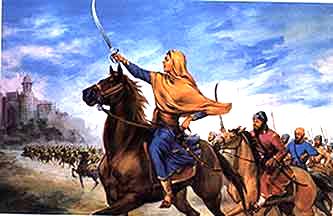 [size=-1]Sardarni Sada Kaur, mother-in-law of Maharaja Ranjit Singh, is one of the builders of the Sikh Raj. She was born to Sardar Dasaunda Singh of Ferozepur District and was married to Sardar Gurbakhsh Singh, son of Sardar Jai Singh, jathedar (Head) of the Ghanya Misl. A misl was like a kingdom for each of the Sikh sardars. They collected revenue from their Misl areas.[/size]

[size=-1]Sardar Jai Singh was a friend of Sardar Charhat Singh, the Jathedar of the Shakarchakia Misl. The areas of the two Misls were adjacent to each other. Unfortunately, Sardar Charhat Singh died early leaving his young son, Mahan Singh, an orphan. Sardar Jai Singh extended his sympathy to the bereaved family and raised Mahan Singh with love and affection.[/size]

[size=-1]When Mahan Singh became an adult, he wanted to use his powers to increase his revenues. He collected money from the nearby Jammu area, which was under the protection of Sardar Jai Singh. Naturally, he got angry at the young boy, Mahan Singh, for his unfaithful act. He ordered him to pay a heavy fine or be ready to be attacked and turned out of his Misl area.[/size]

[size=-1]Mahan Singh understood the blunder he made for the lust of wealth. He went to Jai Singh to feel sorry and negotiate the fine to be paid by him. Sardar Jai Singh, being very mad, did not agree to relax his condition of collecting heavy fines from Mahan Singh. The reconciliation efforts having failed, he had no alternative but to face the mighty Sardar Jai Singh. To be able to come up to the level of giving a good fight to Jai Singh, the young sardar decided to get as many people on his side as possible. All the opponents and Sikh chiefs jealous of Jai Singh got on the side of Mahan Singh.[/size]

[size=-1]A big battle was fought between the two brave Sikh armies, each proud of his men and their expertise in fighting skills. Gurbakhsh Singh, son of Jai Singh was fighting on one front independent of his father. He was murdered in the fight, leaving young Sardarni Sada Kaur a widow and his father without support. Jai Singh could not bear the loss of his only son in the battle and immediately gave up the fight. He threw away his arms and raising his hands cried aloud to his opponent to murder him. While weeping he said he did not want to live without his son, his only hope in the world. The fighting stopped right away leaving Jai Singh a mental wreck and incapable of managing his Misl.[/size]

[size=-1]Sardarni Sada Kaur did not lose her heart even under these trying and adverse situations. She decided to face all these problems bravely and tactfully. She reconciled with her main opponent Mahan Singh. She offered the hand of her daughter Mehtab Kaur to Ranjit Singh, the son of Mahan Singh. The engagement of the two children cemented the friendship of their parents and removed all the grains of mutual enmity and misgivings. The combination of the two big Misls, Shakarchakia and Ghanya created a force to be counted as number one in the Punjab state.[/size]

[size=-1]It is said misfortunes never come alone. Another great tragedy struck Sada Kaur. Sardar Mahan Singh died three years after the engagement of his son Ranjit Singh and left him an orphan at the age of nine. To face this new unfortunate situation, Sardarni Sada Kaur had to perform the marriage ceremony for her daughter when she was just a child. The marriage entitled her to conduct and manage the affairs of the Shakarchakia Misl as well.[/size]

[size=-1]She handled her job so wisely and bravely that she was able to achieve the long cherished goal of the Sikhs of becoming the rulers of Punjab. She performed this great task within 9 years after taking over the charge of the two Misls.[/size]

[size=-1]She used both tact and power to unite all the major Misls to take over the rule of Punjab. Some Sikh chiefs willingly joined her because of her good negotiating power. Others, she physically took over with the help of her strong army and annexed their Misls. She gave them (Sikh chiefs defeated by her) appropriate positions in the enlarged kingdom to keep them on her side rather than letting them nurse any ill-will against her as her opponents.[/size]

[size=-1]Whenever an opponent tried to weaken her or any invader tried to loot her territory, she defeated them to silence them forever. In this way, one success after the other led her to make her son-in-law, Ranjit Singh, become the ruler of Lahore before the turn of the century. The Sikh Raj was thus established in 1799 in Punjab. She guided, advised, and helped him to take over not only the whole of Punjab lying to the west of the Satlej River, but also to become the ruler of the regions adjacent to the Punjab. Ranjit Singh thus became a great, powerful Maharaja of Punjab. He defeated the Pathans and Mughals, and subdued these great fighters who had been coming from the west, invading and looting Punjab for almost a century.[/size]

[size=-1]Sardarni Sada Kaur thus carved out a place for herself in the history of northwestern India as one of the builders of the Sikh State.[/size] [size=-1]Sikh women are good statesmen and great soldiers. They can organize armies, win battles, and rule the state well.[/size]