Simon Parker talks to Chaz Singh about community, politics, faith and donning that distinctive red Santa outfit this Christmas. Pictures by Emily Whitfield-Wicks. While most of us are settling down to a spread of traditional fare next Friday, there will, of course, be many, many people across the South West and elsewhere who have chosen to forego the pleasures of Christmas Day in order to concentrate on the needs of others. All across the region, in hospitals and care homes, emergency services and agriculture, work goes on as normal. In addition, there are the ones who give up their own Christmas celebrations to make the day special for those who would otherwise have no one to share it with. At churches, community centers and charities, teams of volunteers will be planning feasts and festivities for the lonely, the homeless, the marginalized. 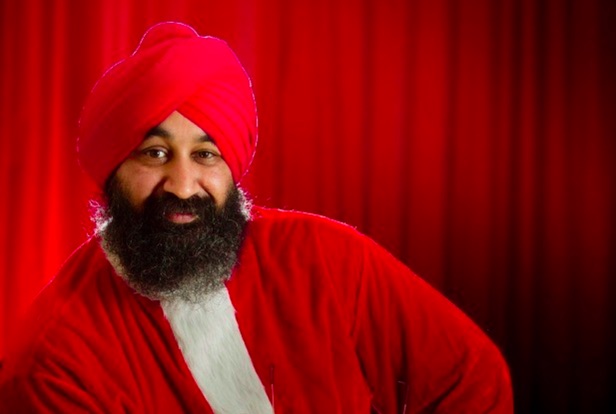 At Welcome Hall, an unremarkable and slightly tatty building in the heart of Devonport, some sixty or so folk of all ages who would otherwise be spending Christmas alone will sit down to a four-course dinner, complete with all the trimmings. Among the volunteers serving up the food will be Chaz Singh. A big character in every way, Chaz has endeared himself to the people of Plymouth through years of tireless work for groups and individuals who often find themselves left behind or ignored.

As well as his regular duties as a busy city Councillor, in the coming week Chaz will also be slipping into a big red suit to play the role of Santa Claus at no less than three children’s parties. This might come as a surprise to some people, but to this eminently genial father-of-two it is simply an extension of his faith.

In case you hadn’t noticed, Chaz is a Sikh. By extension, Christmas is probably less important to him in a purely religious sense than, say the birthday of Guru Nanak, Sikhism’s founding prophet – but he’s keen to stress that in wider British cultural terms, the Christian festival is as great a celebration. Ethnicity, after all, is based on individual choice – and although Chaz was born a Brummie, he has chosen to become a Janner.

“Around this time every year I’m always asked it I celebrate Christmas,” he said. “And they’re quite surprised when I tell them I have three bookings to be Santa. But I can see what people mean – who would have thought there’d be a Sikh Santa in Plymouth? But that’s just me, I believe in getting involved and being a part of the community you reside in. This will be the ninth or tenth year we have been doing the Christmas lunches. The Welcome Hall is the heartbeat of Devonport and the center manager – Glynis Lidster – is the backbone of the place. She’s the cook and the organizer, while we just fetch people in a minibus and serve it up.”

Compared to the majority of Plymouth’s 250,000-strong population, Chaz is a relative newcomer, having first moved to the city with his family in 2002. Yet in just a few years he has, by any standard, made a considerable impact. A city Councillor, representing Drake ward, he became Deputy Lord Mayor (with his wife Saranjit at his side as Deputy Lady Mayoress) in 2012, stood against Gary Streeter in last May’s general election, and organizes the annual St George’s Day parade.

One of seven children and a “grafter” by nature, Chaz says working actively for the community is central to Sikhism, and one of the reasons its adherents are considered to be among the most integrated communities in the world.

“We can settle anywhere,” he said. “And the reason for this is that Sikhs always share their story and get involved. We all have a story. We all have culture. We all have history. But as Sikhs, we believe it’s no good keeping it to yourself. Share it, tell everyone who you are, and you will reap the benefits.”

Although now a very visible part of Plymouth, Chaz’s relationship with the city was almost over before it began. Having bought a newsagents in Plymstock with his wife Saranjit, their two young children, and his parents, the sudden death of his father led to them heading “home” to Birmingham.

“The people of Plymstock loved my Dad. He would sit outside the shop and chat and got involved in the community. There were a lot of tears when he died. We made so many good friends, so when we found ourselves back in Birmingham in 2008 it felt wrong. I said to Saranjit almost as soon as we got back that within a year or so I wanted us to make our permanent home in Plymouth. I’d realized by going back to Birmingham that my heart and my home was in Plymouth. Plymouth had grown on me and I’d grown on Plymouth – it was a love-love relationship.”

And that is exactly what came to pass. Chaz was offered the post of funding and training officer for Fata-he, a charity working to redress social and economic inequalities, and never looked back.

“That was my bed of community activism in this city,” he said. “Working with marginalized groups, individuals, the prison service, getting people back into work across Plymouth, Cornwall and Devon.”

However, the move to the Westcountry hasn’t been a bed of roses all the way for Chaz and his family. Although there are some 700,000 Sikhs in the UK, there are just 87 in Plymouth – so a tall, turban-wearing man with a big personality was bound to get noticed.

“It was in Plymouth that I first heard someone tell me to ‘go back to your own country’. It was a real moment. It was on the street and so random. I was shocked to hear it. This is my country, I thought, I was born and bred here, and yet there are people who regard me as something else. And when that happens, you can either sit back and be the victim or really get up and say ‘I won’t let this take me down’ – in the fighting spirit of Sikhs. It’s funny because until that moment I didn’t have any political ambitions whatsoever.”

Paradoxically, it was perhaps that anonymous bigot on a Plymouth street who inspired Chaz to enter politics.

“@I describe winning the Drake seat as my mini Barack Obama moment,” he said, with the widest of grins. “I am the first Sikh Councillor in Plymouth. It was reported right around the world – particularly in the Punjabi press, which was amazed that a Sikh could be elected to a council ward where there are no Sikhs.”

Looking to the future, Chaz has his eye on Westminster. Having fought Gary Streeter in the frankly unwinnable (for Labour) West Devon seat last May, he hopes to be selected for a different Plymouth constituency in 2020.

“What they don’t understand is that I’d already ‘won’ just by having my name on that ballot paper – and whatever the odds I’ll always come out smiling. I came second, with 17 per cent of the poll – up 4.2 per cent – beating UKIP, the Greens and Lib-Dems. The world was watching this lone Sikh in a city of more than a quarter of a million people and from the result it was clear that he didn’t need Sikh votes to win. So for a turban-wearing Sikh to be elected to the House of Commons in 2020 would be massive.”

However, 2020 is a few years away and before that Chaz will be rolling up his sleeves. Tomorrow night, he and Saranjit will be attending an ceremony in Bristol, having been nominated for the South West Man and Woman of the Year award. And on Friday he’ll be helping to serve dozens of Christmas dinners in Devonport.

“I wouldn’t be where I am without Plymouth,” he said. “There’s so much love in Plymouth and I want to give something back.”

Summing up his own philosophy, and that of Sikhism in general, he added: “We have something called Chardi Kala, which refers to a mental state of optimism and joy – eternal bliss. It’s part of our character, our being, our presence. Thinking about others and helping others is central to our faith.”