Sikh Nishan Sahib demystified - The Nishan Sahib is, for all intents and purposes, a sign board that stands tall and calls out for those who need protection, solace and a meal....But Sikhs have turned it into an article of worship. By Karminder Singh Dhillon, PhD (Boston)

The kesri (xanthic) colored flag that Sikhs respectfully call the Nishan Sahib and seen flying at Gurdwaras is to the Sikh place of worship as Sikh dastaar or turban is to Sikh identity. A few points on its origin, function and manner of respect may be as useful to the reader as much of some commentary on worship-like rituals that have sprung up in recent times in relation to the Sikh flag. 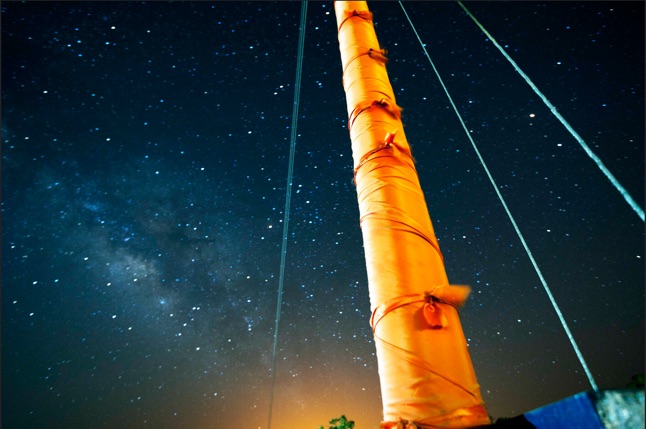 Sikh scholar-cum-historian Kahn Singh Nabha writes that the Nishan Sahibwas originally called Jhanda (flag)Sahib and that it was founded by Guru Hargobind Sahib Ji. Folks who get offended when someone refers to the Sikh flag as “Jhanda” can take note of this fact.

In the village of Fagwara in Punjab, there is a historic Gurdwara marking the transit of the seventh master Guru Har Rai Ji during one of his travels from Kartarpur to Kiratpur, called Gurdwara Jhanda Sahib, lending credence to the fact that the term “Jhanda Sahib” had come into existence then.

“Every Gurdwara should install a Nishan Sahib at some high location. The cloth of the flag should either be Basanti(Xanthic) or Surmayee (greyish blue) in colour. At the top of the Nishan there should either be a Bhalla (spearhead) or aKhanda.“ (a double edged straight sword, with convex sides leading to slanting top edges ending in a vertex.

One is hard pressed to find a Gurdwara flying the Nishan in the the Surmayeecolour these days, even if it was the standard colour of Nishan Sahibs flying in the Gurdwaras in townships where I grew up.

FUNCTION OF THE NISHAN SAHIB

It is clear from the words “at some high location” in the SRM stipulation above that the primary purpose of theNishan Sahib was to act as a sign board and a symbol of the Gurdwara.

If one reads Kahan Singh Nabha’s writings of the original functions of the Gurdwara, one can see the logic of the Gurdwara needing a symbol that was visible from afar for Sikhs and especially for non-Sikhs.

Beyond being a primary place for the teaching and practice of Sikh Spirituality, the Gurdwara was to have a number of other functions.

The Gurdwara was meant to serve as a sanctuary for the protection of dignity of women. If such a function sounds odd it is because we Sikhs have terminated this function for so long, that it is no longer part of our collective memory. I doubt our modern Gurdwara parbhandaks are even aware of this primary function of the Gurdwara.

I further doubt that a battered, displaced or otherwise needy woman seeking protection in our modern Gurdwaras would be accommodated in any meaningful way!

The Gurdwara was also meant to serve as a resting place for the weary traveller. Again, if this function sounds strange, it is also because we have stopped accommodating travellers in our Gurdwaras from a long time.

The Gurdwara was further to serve as a “meal-house” for the hungry. The key word is “hungry”. Serving meals to the well fed or those who have better cooked meals waiting in their houses does NOT fall in this category even if this has become the standard practice of langgar in our modern Gurdwaras.

All the above functions were meantequally for the Sikh and non-Sikh. It is on these functional grounds that Section 3, Chapter 4, Article V (k) of the SRM reads:

“No person, no matter which country, religion or cast he/she belongs to, is debarred from entering the Gurdwara…”

This then is the primary function of the Nishan Sahib. It is located high as a beacon of hope for any woman seeking to protect her honour, as a light house for a weary traveller seeking a place to rest, and as a welcome sign for a hungry/displaced/homeless person seeking a meal. The Nishan Sahib is, for all intents and purposes, a sign board that stands tall and calls out for those who need protection, solace and a meal.It is inviting them, in the name of the Guru to come to the Gurdwara and be served.

Gurdwaras have perfected the art of building taller and sophisticated Nishan Sahibs – complete with lights, pulleys, and other electronic display systems. Some are visible from tens of miles. Such would be wonderful if the Gurdwara actually provided the appropriate services to those it did attract from afar by it 100 feet tall flag pole.

But if the Gurdwara fails to provide the basic functions as mentioned above, then its tall Nishan Sahib is akin to a defunct hospital that has a huge sign visible from ten miles, but tells patients who show up that there is no doctor, no treatment and no medicine there.

But Sikhs have by and large, turned the Nishan Sahib into an article of worship. Sikhs are seen walking around the flag pole in parkarma(circumambulation style), folding hands to metha tek or bowing down to the concrete base of the Nishanrepeatedly, rubbing their noses on the base, tying pieces of cloth or ribbons to the flag pole and then taking them home a few days later as blessed material, and much more.

Those who consider such practices as respect or reverence ought to think a little deeper.

One does not respect road rules bymetha tek or bowing to road signs. One does not display any reverence to a welfare home by circumambulations of its sign board.

One does not acquire health by trying ribbons to the hospital’s sign board and then taking the ribbons home as equivalent to medicines. One does not become educated by doing repeatedparkirma of, or by rubbing ones nose repeatedly on the school sign board.

If only everything was this easy! What then makes us think that we can acquire the Guru’s blessings by doing all the above to the Gurdwara services sign board that is the Nishan Sahib but by doing nothing to ensure that the Gurdwara actually functions the way it was supposed to function?

A Sikh ought to consider his or her head as priceless to only bow before the Guru Granth Sahib. Bowing before just about everything within the precincts of the Gurdwara – gate, steps, stairs, mats, photos, base structure of theNishan Sahib etc – even if they are all part of the Gurdwara’s physical structure – is to suggest that they are all equal in stature to the GSS.

Sikhs are known for their penchant to slide down the slippery slope of rituals. Where we cannot steal from others, we invent our own.

One wonders where the idea of dressing up the flag pole came from. The logic of it is dumbfounding. The Gurdwara I attended regularly did not have such dressing and one illiterateparcharak from India took it upon himself to berate the parbhandaks and the sangat openly for allowing the “Guru’s Nishan” to stand “naked.”

He went on to call the dressing “chola sahib” (literally: holy dress) and said the covering was akin to the “kachera” and that its function was to protect the “dignity” of the Nishan Sahib.

I asked him after his pseudo katha if the Nishan Sahib should also be adorned with the remaining threekakars – kirpan sahib , kra sahib andkanga sahib!”

Gurdwaras are known to change theNishan Sahib on Gurpurabs. There is no mention in the SRM of such a requirement. Logic dictates that theNishan Sahib ought to be changed when it is torn or appears faded. No need for any fanfare.

One would have surely witnessed theNishan Sahib change being done in worship type rituals that can take a couple of hours and is witnessed by entire sangats.

Some Gurdwaras have constructed fulcrum type flag poles which allow the flag pole to be laid horizontal. Hours are then spent washing the pole in pails full of milk or yoghurt or lassee. The entire pole is then towel-dried and dressed up in cloth with tie backs.

Some Gurdwaras use cranes for the same purpose. Other have ladders.

Doing such is munmat, or deviant practise, plain and simple. It is waste of milk, lasee, cloth, time and energy. It is not supported by the maryada or Gurbani and there are no historical records of Sikhs doing this in previous eras.

One can appreciate if the purpose of the Nishan changing ceremony is to educate or inspire love within thesangat for the Nishan Sahib. But the only “education” that takes place is one relating to self-constructed rituals.

Kahn Singh Nabha writes that the two majestic Nishan Sahibs that stand in the doorway of the Darbaar Sahib were first put up as wooden poles in 1775 by the Udasi Babas who ran the place then. They were broken up in a storm in 1841 and one was rebuilt by Maharaja Sher Singh and the other by Desa Singh Majithia. Both the flags are made of iron but adorned with copper plates. The high base was rebuilt in 1923.

Such facts illustrate that the Nishan Sahib can and has taken a variety of forms – wooden poles and flags of iron included. Nowhere however is the practise of covering up the pole with a “chola sahib,” or washing it in milk orkachee lassee shown as a practise except in recent times.

A Nishan Sahib is just that – a Nishan, a symbolic sign board. We can make it tall, big and visible from as far as the eye can see so that it attracts those who are in need of Sikh sewa towards humanity to come to the Gurdwara. But then, it is our duty to ensure that our Gurdwaras are functional to serve such needs. What are we doing about creating truly functional Gurdwaras, is the question.

Having sign boards that are the tallest and most unique but having nothing to offer to those who show up in response to these sign boards is deception – fraud even.

Worshipping and undertaking ritualistic practices involving a sign board is to miss the point all together. Worse, it represents our own spiritual hollowness.

NEXT WEEK: THE ROLE AND FUNCTIONS OF A GURDWARA.

Karminder Singh Dhillon, PhD (Boston) writes on Gurbani and Gurmat issues in The Sikh Bulletin, USA. He also conducts Gurbani Katha in local Gurdwaras. He is currently running a class on understanding Anand Sahib at Gurdwara Sahib Petaling Jaya on Sundays 6.30pm–8.30pm. He is based in Kuala Lumpur, Malaysia.