The martial drill by Indian soldiers lasted for about 20 minutes but it was apparently enough to leave personnel of the 1st Battalion Infantry Division of 13 Group of the PLA in shock and awe. On the last day of the Hand-in-Hand joint training exercise, some Chinese soldiers were shaking their heads about the "Gatka"--martial art practiced by Sikh warrior clans--performed by the personnel from the 16 Sikh Light Infantry during the exercise.

The performance had started with stick fights but soon props like swords, nails and hammers were added. For example, one part involved the smashing of a coconut by an Indian soldier with a hammer as a fellow-soldier balanced the fruit on his head.

One display had an Indian soldier lying on a bed of swords with two more soldiers balanced on him on beds of nails -- on top of each other. Selected Indian soldiers were trained in Gatka by a specialist for four months, an officer said.

The training clearly paid off.

"It was a very strong show. I had never seen anything like it. I have seen Bollywood singing and dancing but this was very tough. This was very different. It must have hurt," said Major Zhang.

The refined Chinese display of the martial art Kung Fu was also appreciated by the Indian soldiers and officers.

On the last day, the exercise culminated in a hail of bullets, grenades, anti-tank rockets and mortar shells as soldiers from both countries took on a group of "100 terrorists" in a simulated anti-terrorism operation.

The misty hills of Emeishan added to the setting as the soldiers attacked the terrorists' housed in a well-fortified location with tunnels and caves.

"It was a very professionally carried out exercise. Though our modules of training are different, the soldiers coordinated well," Colonel Gaurav Srivastava, commanding officer of the Sikh Light unit said.

Language was a problem but a group of translators helped the soldiers in understanding each other, he added.

The soldiers also got a taste of each other's culture with the contingents holding common dinners and cultural programmes. 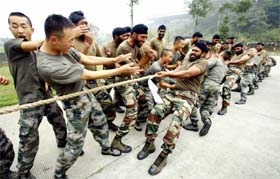 These are moving photographs. So glad that you uploaded them. I have to let you know that because they are uploaded as image links they may disappear unexpectedly when the source archives them. Or if the servers that operate SPN view live links as too heavy and cut the connections. Just a heads-up. I did take the large pic and made it smaller, then uploaded it as a jpg file. That one should be preserved. The others may stay for a while. I hope they do.