See How The Rules Were Bent By Punjab Govt

This is How the rules were bent
With top politicians as members, the Punjab Government gave special treatment to the Tata housing project, using loopholes to permit 19 towers apart from ensuring two convenient approach roads from Chandigarh

Having all top politicians in the state on board for the Camelot project of the Tata Housing Development Company (THDC) has apparently been a wonderful business proposition for the real estate developer. With 129 peoples’s representatives (both serving as well as former MLAs and MPs) as beneficiaries of the project, the company has ensured that its USP of being in the backyard of the lake with the Shivaliks forming its backdrop, yields a great response from investors. 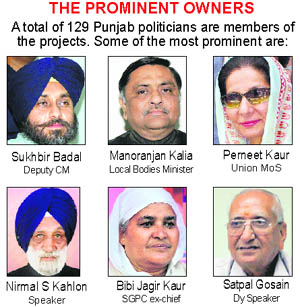 With both Deputy Chief Minister Sukhbir Singh Badal and Local Bodies Minister Manoranjan Kalia being members of Punjab MLAs Housing Society (which sold its 22 acre land to THDC in return for a flat and Rs 82.50 lakh cash to each of its members), not only has the state government expedited all clearances required to sell the project, but it is now also facilitating the project by proposing easy and shorter access to the Camelot site.

Over the past two days, The Tribune has been highlighting how the multi-storey highrise project by THDC will mar the skyline of Chandigarh. The project is not only violative of the New Capital Periphery Control Act, which bans development in the 16-km buffer zone around Chandigarh, but it will also impact wildlife in the neighbouring Sukhna Wildlife Sanctuary. It is being constructed in the ecologically fragile foothills of the Shivaliks and could lead to excess soil erosion.

]The state government now plans to construct a 30-metre wide road from Kaimbwala village in Chandigarh, passing through Kansal village, touching Khuda Alisher village (in Chandigarh) right up to the villages of Nada and Mullanpur. The alignment of this road, when constructed, will not only be along the Camelot project site in Kansal village, but also adjacent to the land owned by several other top politicians of Punjab, making it more accessible to Chandigarh and, thus, leading to a higher price valuation of the land owned by them. Punjab has reportedly already asked the Chandigarh Administration to allow road construction in its (UT) area. 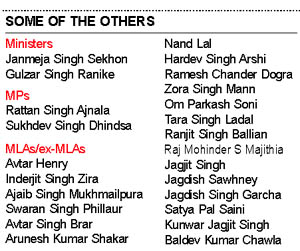 Another access road is envisaged to link the Punjab and Haryana Civil Secretariat to the above mentioned 30 feet wide road. This 18 feet wide road, right from behind the Secretariat, is proposed to be constructed through a residential society in Kansal village and will culminate after aligning with the above-mentioned road. Interestingly, the point of culmination of this road is near the commercial site proposed in the Nayagaon Notified Area Committee. A top Punjab politician reportedly owns this chunk of land, which will be used for wholesale and retail trade, hotels, restaurants, offices and cinema halls.

Investigations made by The Tribune reveal that the Punjab government went ahead and bent rules to ensure that there was no legal incumberance whatsoever regarding the Camelot project, before it was launched and sold. Though both the Nayagaon master plan and the master plan initially made by Singapore based consultancy Jurong International said that no high rise buildings could be built in the Shivalik foothills, the Camelot project site was included in the Nayagaon NAC, where high rises are allowed under the municipal laws. 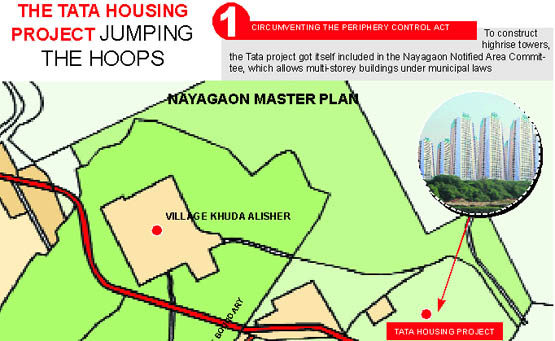 Is there not a way of inviting these people on to some TRUTH TV station and
asking them to explain how their example would help the ordinary person who wants to contribute
to the state and the country?
</td><td valign="top" nowrap="nowrap">
</td> <td width="100%">
</td></tr></tbody></table>
R

Dear Mr. Dhanjal,
There is truth in the observations which you and all members have regarding the system going on. The corruption and the system is being expanding and its deep roots are spreading like cancer.
There is a lack of organized MEDIA that put coverage on the malpractices of the leaders and bureaucrats. Because the Media is also running after advertisements (another source of corruption)
http://ww.smashits.com/audio/player/frameset.cfm?SongIds=20601
Kis se pooche kaun bataye??????????????
Rajneesh Madhok
R

CHANDIGARH SKYLINE IN DANGER: A TRIBUNE INVESTIGATION - IV
See who profited
The list of beneficiaries of the Tata housing project reads like the who’s who of Punjab politics. Here’s the complete list and what they did to get there
Ruchika M. Khanna
Tribune News Service ​ 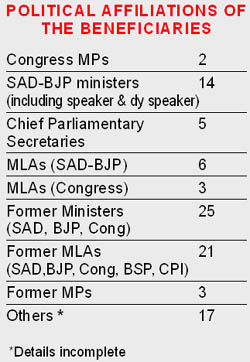 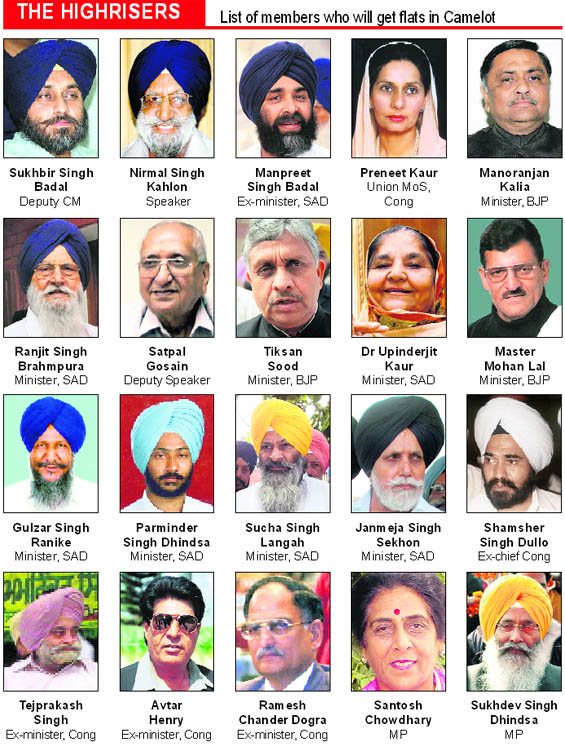 Ironically, despite being rules by Akali-BJP Govt, all are having hands in gloves.
The above mentioned episode proves that
"HAMAM MEIN HUM SAB NANAGE HAIN" ALL ARE BIRDS OF SAME FEATHER.
Rajneesh Madhok
K

rajneesh madhok said:
Ironically, despite being rules by Akali-BJP Govt, all are having hands in gloves.
The above mentioned episode proves that
"HAMAM MEIN HUM SAB NANAGE HAIN" ALL ARE BIRDS OF SAME FEATHER.
Rajneesh Madhok
Click to expand...

The day people will start voting for leaders which are pro development irrespective of their culture,religion,region then the entire scene will change.
I was hearing a discussion on TV and they mentioned examples where corrupt politicians won electioon with bigger margin after their scandals. and there were also examples where the politicians that were pro development were booted out.Anyway people just love to bash politicians because they don't want to take any responsibility on their shoulders.
R

India's politics is caste based politics. Most of the legislatures and Parliamentarians are being elected due to the population of the specific people of that area. The votes are being casted not on merits but on the basis of castes. In India the congress is considered Centre-left or liberal and the Bhartiya Janata party is considered Centre-right or conservative. Both of the parties used to distribute tickets to the candidates considering the caste of the voters not on the basis of the merits.
Why Giani Zail Singh was elected President of India? The opposite candidate was the Retired Chief jusitice of India---Is it?
Giani Zail Singh had been chosen President being an Indira Loyalist rather than an eminent person. Wording of Giani Zail Singh " If my leader has said I should pick up a broom and be a sweeper, I would have done that. She chose me to be President." Giani Zail Siongh quoted these words after winning election and at teh time of taking oath of office on 25 July 1982.
If this is the condition of a President of India then what will we expect from the other leaders or bureaucrats.
Rajneesh Madhok