CAHANDIGARH: Punjab Chief Minister and Shiromani Akali Dal(SAD) Chief Patron Parkash Singh Badal Wednesday said that radical Sikhs (read Khalistan supporters) are welcome to the family of SAD if they accept the policy and ideology of the party.


Replying to questions by media at a press conference at his residence, Badal said "we believe in non violence and if any other person belives in our policy, he is welcome to join us'. He was asked about closeness of SAD with Jasbir Singh Rode former jathedar of Akal Takht who belonged to clan of late Sant Jarnail Singh Bhindrawala and a strong believer of violent means of politics. SAD has roped in Jasbir Singh Rode in view of ensuing Shiromani Gurdawara Parbhandak Committee(SGPC).


Badal said that SAD was a democratic party in true sense and he was proud of its achivements. He found nothing wrong if Jasbir Singh Rode joins SAD. Earlier too Bhai Manjit Singh who remained president of All India Sikh Students Federation(AISSF) had joined SAD and he is now serving the people in government. Bhai Manjit Singh was appointed Chairman of PEDA.


Speaking on terrorism, Badal said that it comes where there is no justice with the people. He said that no such thing prevailed in Punjab. He said that certain groups were trying to create proble and the police has worked hard to nab them. Chief Minister was told that police in Punjab was not even registering FIR in the serious offences like rape, he(Badal) said that no such thing is in his notice. "Give me information of such cases, I assure to take strict action", he said.


Badal said that there was no need for Police Complaints Authority in Punjab on the pattern of Haryana. "In Punjab the state government has its authority and no such circumstances previaled".


He also refused to be dragged into reports that Sikh militants have made Malyasia safe heaven. He said that neither he or the DGP have given any such statement.


On being asked about arrest of a Sangrur Truck driver Gurjant Singh by West Bengal police for attempt to murder Railway Minister Mamta Banerjee, Chief Minister said that he had read the news and he was not aware of the true facts. A leading English newspaper had carried a front page report citing poor condition of driver's family who doesn't have means to even provide legal aid to him. Badal said that he would ask the DGP to speak to his counterpart in West Bengal to verify the facts. Driver Gurjant Singh who belonged to village Mauran in Sangrur district had reportedly rammed truck into the convoy of Mamta Banerjee while she was returning from a rally held at Lal Garh few days back. The driver was first arrested for rash driving and let off on bail He was however later book on attempt to murder and arrested again.

Good to see that the so called RADICALS are not untouchables for SADB . SGPC elections are drawing near , one more reminder for this event .

This one is actually crazy. On the one hand Punjabi law enforcement is papering the Internet with stories about radicals hiding in Malaysia, using it as a transit point. On the other hand Badal, head master of Punjabi, is saying its all OK - radicals are welcome. Is Punjab - the people of punjabi - starting to feel a little brainwashed? Forgive any offense but these stories of more than a month now put together a demented picture.

The Senior Badal is the 'master" of political trickery!
All his actions/statements have one sole objective: "VOTES & NOTES"! 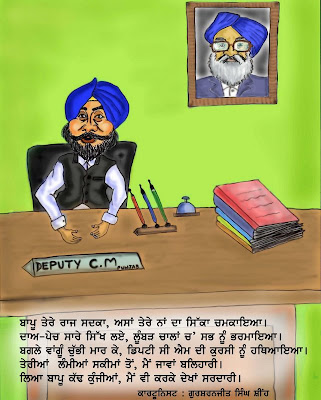