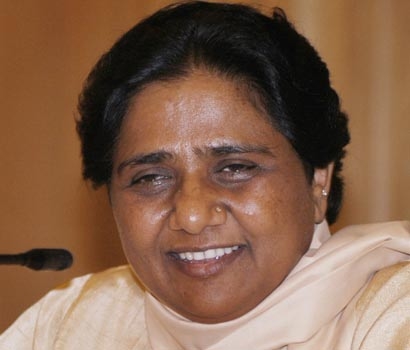 A powerful Indian politician dubbed the Untouchables Queen once sent a jet to pick up her favourite brand of sandals, according to leaked U.S. diplomatic cables released by the WikiLeaks website.

Mayawati, head of India's most populous state, Uttar Pradesh, was described in the cables as "a first-rate egomaniac" who "is obsessed with becoming prime minister."

Mayawati, 55, who goes only by one name, has built a career on championing the cause of the untouchables, known as Dalits, who are among India's poorest and most deprived people.

But she has been criticized for corruption, throwing lavish celebrations and building parks with massive statues of Dalit leaders, including herself.

"When she needed new sandals, a jet flew empty to Mumbai to retrieve her preferred brand," according to a cable dated Oct. 23, 2008. "She constructed a private road from her residence to her office, which is cleaned immediately after her multiple vehicle convoy reaches its destination."

According to the same cable, one minister was forced to do sit-ups in front of Mayawati as a punishment for a minor offence, while those wanting to become election candidates for her party had to pay tens of thousands of dollars for the privilege.

A spokesperson for Mayawati said in a statement that "such exposes" do not carry any authenticity, but she did not mention WikiLeaks by name.

Supporters say her acts fill them with a sense of pride and are a source of inspiration to the millions of Dalits who have traditionally been forbidden from displays of well-being.

At her birthday parties, top public figures, including police chiefs and politicians, are often seen feeding her cake.

The Congress party has been campaigning aggressively to try to wrest Uttar Pradesh from Mayawati's Bahujan Samaj Party, deploying its star campaigners such as party chief Sonia Gandhi and her son Rahul, to garner support.

Dislodging strong regional parties is seen as key to Congress' ability to push through painful structural economic and political reforms to modernize Asia's third-largest economy in the years ahead.

India is awash with stories of corruption that have piled pressure especially on the federal coalition and sparked a wave of street protests demanding tougher laws.

Maya needs to speak to U.S. if she’s upset with cables: Assange

Stating that corruption was the biggest issue in Uttar Pradesh, the Bharatiya Janata Party alleged here on Monday that the menace had grown under the Bahujan Samaj Party regime.
Referring to the WikiLeaks expose related to Uttar Pradesh Chief Minister Mayawati's fetish for sandals published in a local English daily, BJP vice-president Mukhtar Abbas Naqvi accused her of wasting public money to charter a plane to Mumbai for getting the sandals replaced. Mr. Naqvi alleged that Rs. 10 lakh was spent for replacing sandals worth only Rs. 1000.
Mr. Naqvi said the Chief Minister's stand on the Indo-U.S. nuke deal as mentioned in the expose had further exposed Ms. Mayawati.
Cause for concern
The BJP vice-president told reporters at the party headquarters that it was a cause for concern and a challenge to the position of the State which had given several Prime Ministers to the country.
The ruling BSP was quick to rubbish Mr. Naqvi's allegations. A BSP spokesman said in a press statement that the BJP leader had taken recourse to an expose, whose basis and authenticity were doubtful, for levelling baseless allegations. The spokesman said his comments had exposed the BJP's casteist mentality.
The BSP reminded the BJP that it would have exposed it earlier by using the same WikiLeaks expose, but as a responsible political party thought it prudent not to do so.
Comments denied
Cabinet Secretary Shashank Shekhar Singh also denied the comments attributed to him by the expose. According to the cable, Mr. Singh reportedly told the U.S. Charge d' Affaires, Peter Burleigh, at the time of the 2009 Lok Sabha elections that Ms. Mayawati's opposition to the Indo-U.S. nuclear deal was “rhetoric driven by the fact that her political rival, the Samajwadi Party, had supported the deal, and there would be no change in India's foreign policy if she became the Prime Minister.” According to the expose, Mr. Singh reportedly did not think Ms. Mayawati would become the PM after the current [2009] elections but noted that “25-30 seats in the Lok Sabha would make a big difference in government formation.”
In an official press release, Mr. Singh said an official of the U.S. Embassy (Charge d'Affaires) in New Delhi had in May 2009 sought time from the Chief Minister. Since, she had a busy schedule, he was authorised by her to apprise the official of the policies and programmes of the government, Mr. Singh said in the release.
To a query from the Embassy official that Ms. Mayawati was being projected as the Prime Minister of the Third Front, the Cabinet Secretary said the official was told that the BSP was neither a constituent of the United Progressive Alliance, nor the National Democratic Alliance or the Third Front. The BSP had contested all the seats in U.P. in the Lok Sabha elections, the U.S. official was told, the Cabinet Secretary added.
Asked about the BSP foreign policy by the official, Mr. Singh said he refused to comment on such a sensitive and important issue at that time.
http://www.thehindu.com/news/national/article2427495.ece
http://www.thehindu.com/news/national/article2427495.ece