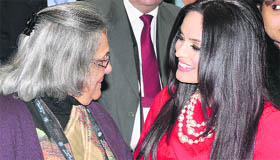 
Punjabi parliamentarians from various countries, including India, Canada, the United Kingdom, Malaysia and Singapore, floated a new body at the Pravasi Bharatiya Divas here yesterday to find solutions to issues concerning the community across the globe.


Christened as the World Punjabi Parliamentarians Forum, the event to form the body had Bollywood touch to it, with Dharmendra, who represented Rajasthan in the last Lok Sabha, being felicitated with Punjab Rattan Award in the presence of another actor-cum-MP, Raj Babbar.

Though Dharmendra’s actor-sons Sunny and Bobby Deol were also present, the cynosure of the event was Ruby Dhalla, young MP from Ontario, Canada. She was the only one of the 10 Indian-Canadians MPs in the House of Commons in Ottawa present on the occasion. Notably, the demand for the forum was mooted in the United Arab Emirates last year where a large number of Punjabi workers had been undergoing trial for offences “they never committed”.

Union Minister of Sports MS Gill, Rajya Sabha ex-member HS Hanspal and Raj Babbar represented the Congress while SS Dhindsa and Naresh Gujral were there from the Shiromani Akali Dal. SS Ahluwalia and Dharmendra represented the BJP. Former chairman of the Minorities Commission, Tarlochan Singh, and former Union Minister Balwant Singh Ramoowalia represented the Independents at the ceremony that was followed by a spectacle of colour, dance and folk music.

KS Bakshi and RS Dhaliwal, first Sikhs to be elected to Parliament in New Zealand and Malaysia, respectively, were also present, besides Lord Diljit Singh Rana and Baroness Sandip Verma, first Indian-origin woman to be a minister in the minority British Government.

Appreciating the role being played by Punjabi politicians across the globe, SS Ahluwalia said “it was a great honour for the Punjabis to have Inder Kumar Gujral as the first Sikh Prime Minister, followed by Manmohan Singh (from the community)”.