To talk to Mr Amardeep Singh is to get a crash course in Sikh history - probably not something one would expect from a former high-flying executive in the credit card industry.

The self-professed history buff delves deep into the bloody past of the Sikhs in Pakistan, gradually leading up to why he made his own pilgrimage there two years ago. 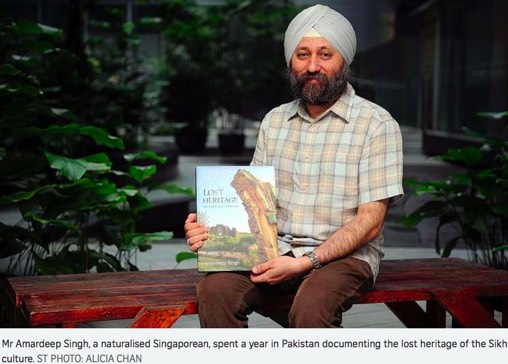 That trip culminated in a 500-page book - Lost Heritage: The Sikh Legacy In Pakistan - filled with glossy photographs and historical anecdotes about Sikh heritage sites in the country.

"I grew up with stories of massacres, of how we had fought and all the issues that resulted," said the 49-year-old father of two daughters, who grew up in India but is now a Singaporean.

"But my dad also always used to talk about the pristine beauty of that land. And... it made an impact in my early childhood days and (created) a desire to actually go there."

Millions of non-Muslims were forced to move across the border to India and vice versa, with violence breaking out between the communities.

Mr Amardeep's parents, who were Sikhs living in Pakistan at the time, were among those caught up in the mass migration. Members of his extended family were killed in the ensuing massacres.

Growing up, Mr Amardeep read extensively about the homeland he had never seen. Later on, during his 21-year career with American Express, he honed his writing and photographic skills.

His job took him from India to Hong Kong and finally, to Singapore in 2001, when he was 35. However, as an Indian citizen - which he was until 2005 - he was unable to secure a tourist visa to visit Pakistan due to the strained ties between both countries.

In 2013, he quit his job here as the company's Asia Pacific head for revenue management "to do something different" and plunged into full-time history research. A year later, he was in Pakistan.

He recalled the pride he felt when he saw the temples, mansions and forts built by his ancestors. These included an 18th-century fort in Haripur built by Hari Singh Nalwa, then leader of the Sikh Empire's army, and former Sikh homes in the city of Rawalpindi.

"These guys were living in style," he said, turning the pages of his book to show pictures of towering gates and painted frescos. "They were at the peak of their civilisation."

The founder of Sikhism, Guru Nanak, was born about 65km from Lahore (now in Pakistan) in the 15th century. The heart of the Sikh Empire, which rose to power in the late 1700s, was in the Punjab region.

Mr Amardeep felt deep sorrow for the legacy his people had lost. Many buildings he visited were abandoned and crumbling. Others were occupied by hundreds of poor families.

"Some buildings smelled bad and there was excrement all around," he recalled.

A piece of graffiti scrawled on the wall of an old temple - now used as a storehouse - brought tears to his eyes. It read: "I lost my everything".

But it was not all bleak.

Mr Amardeep has a picture of a former Sikh temple in the Mansehra region - now a library - whose walls are lined with books.

"This is where we would keep our holy scripture, seven or eight decades back," he said.

Several months later, back in his own library in Singapore, his eyes fell on two 19th-century British travelogues of the Sikh Empire. It was then that the idea to record his journey in the form of a book was born.

"A hundred years from now, none of these places will exist. They are about to fall apart; they won't last more than 10 to 15 years," he said.

Said former Member of Parliament Inderjit Singh: "For Sikhs and Punjabis, there is great emotional attachment to the culture, heritage, and language, even of what was left behind in Pakistan."

Yet publishers initially told Mr Amardeep that his vision - a 2.6kg, 500-page hardback - was not commercially viable. He began having doubts himself, too.

I started saying to myself: "You're essentially a credit card industry guy; you've never done publishing. What are you trying to do?"

But he pressed on, finding 20 private backers for the self-publishing project, although he declined to reveal how much it cost.

Apart from serving as a visual record of the Sikh heritage, his hope is that it will spur members of the Sikh diaspora around the world to work with the Pakistani government and preserve some elements of their heritage.

"As an individual, I can't do it," he said. "I see myself as a catalyst, taking this work across the world, and... hopefully we can save some things."

One hopes this fellow Singhs great and inportant work is available in a form that young, not so young and convert Sikhs may study and understand as they may never get to see or visit these important centers of Sikh culture and history especially if they are deteriating to the point of collapse and the pakistani government is unwilling or unable to repair and restore them