The following comment on social media provides a seemingly valid argument pertaining to portraits of our Gurus. My response follows.


An artist is able to express what philosophies cannot. An Artist has an aesthetic experience in which he/she surrenders to “it” with no other intention than the beauty of that experience in itself. Given, our Gurus were human beings and expressed likewise doesn’t mean they’re belittled or have become icons of murti pooja (idol worship), but rather part and parcel of our everyday lives. And just as photos of our loved ones are displayed in our homes so too are the portraits of our Gurus.


From the above sampling of verses, one gets the clear message that Gurmat is a philosophy that strives hard to obliterate the status, position and standing of the messenger. Mein Nahin –I am not, I am nothing, the messenger is of no significance.


None of the 35 writers of Gurbani left even the faintest of clues as to their full names, that of their parents, their spouses, their families, their place of birth etc. None of our Gurus indulged in having their portraits created. Surely amongst their followers, there would have existed many a good artist as there were poets, musicians and skilled persons in other arts to record details of their physical likeness. It is not that they could not. But that they were disallowed.


It is the tragedy of Sikhs that instead of linking with the messages, we have strived to link with the physical identity of the messengers – the identities they sought so hard to obliterate. They sought to obliterate their own personal human identities so that we could learn to do the same to ours and not indulge in the egoistic inflation of our own.


In our own desire for self-indulgence and self-grandiose, we have sought to transfer the same to our Gurus. In our own egoistical desire for portraits, pictures, paintings and drawings of our own selves, we have sought to create the same for our Gurus. To the extent that we have accepted artists’ impressions that are as fake as the one artist who created a self-portrait and passed it off as Guru Nanak’s. All of us Sikhs. including our premier institutions such as SGPC were fooled into giving this fake portrait a place in our homes, gurdwaras and psyche. 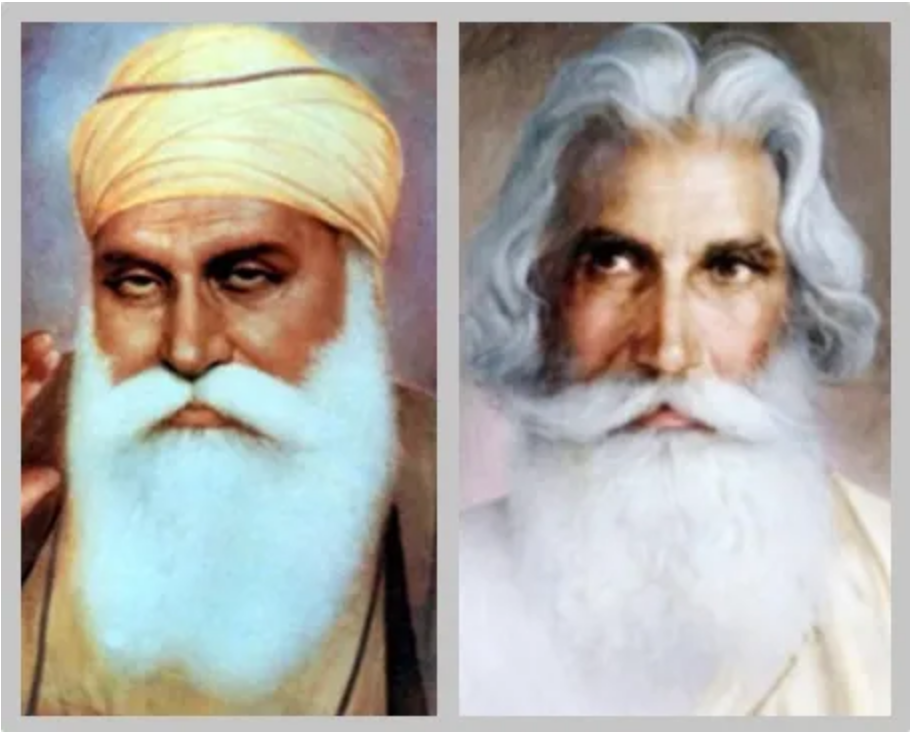 
The statement that “an artist is able to express what philosophies cannot” needs to be examined to expose the falsity of the premise. In the case of our Gurus, our artists have expressed what our philosophy did not want to express. The portraits of Guru Nanak are shown ordained with rosaries, offerings and ornamentations that have been critiqued in their messages. The portraits of Guru Nanak tell the lie of a non-existent companion Bhai Bala. The wide acceptability of these portraits help establish the lie of the Janm Sakhis under the name of Bhai Bala. The eventual outcome is a philosophy that exists within the message of the Gurus side by side a contradictory philosophy that the artists have created for us in their portraits.


The statement that “an artist has an aesthetic experience in which he/she surrenders to “it” with no other intention than the beauty of that experience in itself,” holds the biggest lie when it comes to Sikhi. What aesthetic experience can an artist have – if he has not read or understood the crux of the messages of the Guru that he paints? What kind of surrender can one talk about in the act of an artist painting the image of an individual who expressly forbade such in the first instant? The only intention that remains is either a monetary reward from the sale of such fakery or a purposive one to corrupt the philosophy of Gurmat. 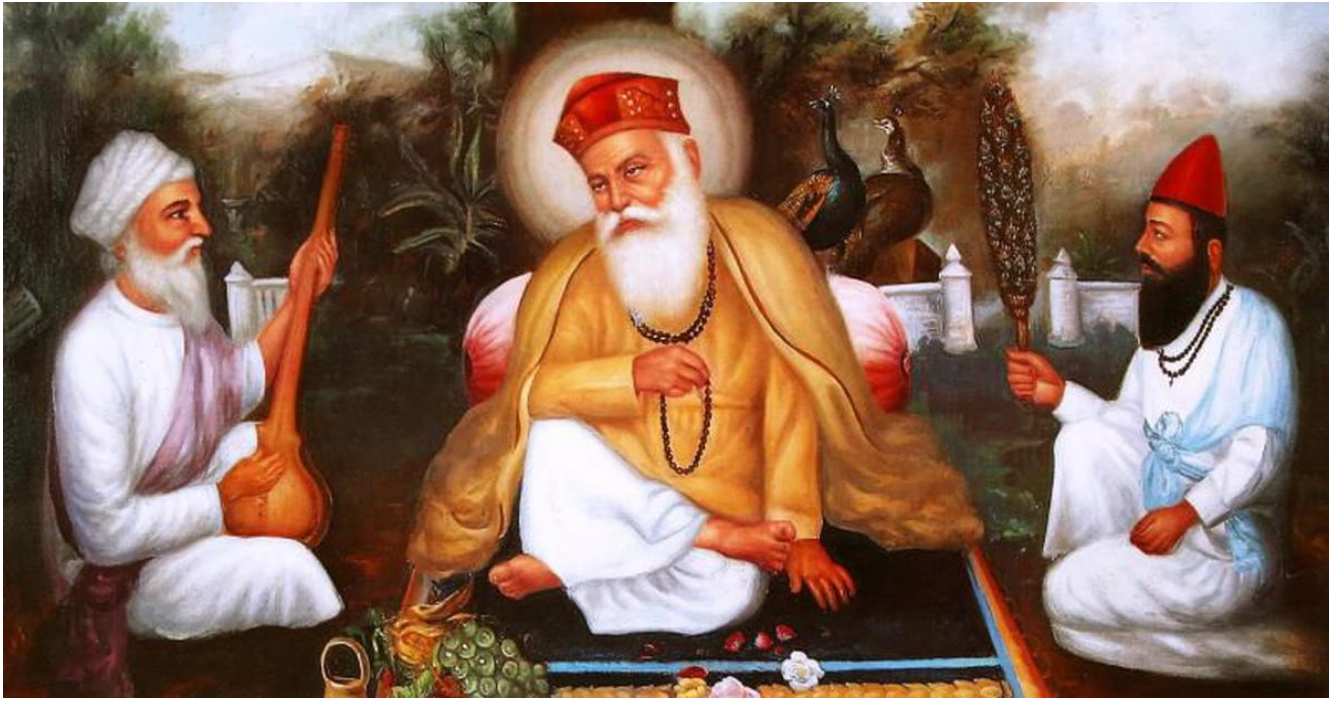 The mythical entity in the person of Bala was made into a “historical reality” – thanks to the “aesthetic” experience of the artist. The acceptance of the non-existant Bala led to the acceptance of another heretical and blasphemous text called Bhai Baley Wali Janm Sakhi.


To say that our Gurus have not been “belittled or become icons of murti pooja given that our Gurus were human beings,” is an expression of ignorance of what our Gurus said, preached and wrote out for us – as human beings. A study of Gurbani in relation to morti pooja will point out the fallacy of such a view.


The statement that “and just as photos of our loved ones are displayed in our homes so too are the portraits of our Gurus,” is defective because it is the case of comparing apples with bananas. We want our photos to be displayed, and we understand that our loved ones wanted them to be. We go to great lengths to create our own photos to leave behind, so that they can be displayed. Such is the essence of our fallible human-ness; one that is centred on our innate ego.


On the other hand, our Guru have told us amply – both through their messages and their own conduct – that they wanted no such thing. And if our Gurus did go to great lengths to do anything – it was to ensure their pictures, paintings, and sculptures were never made. 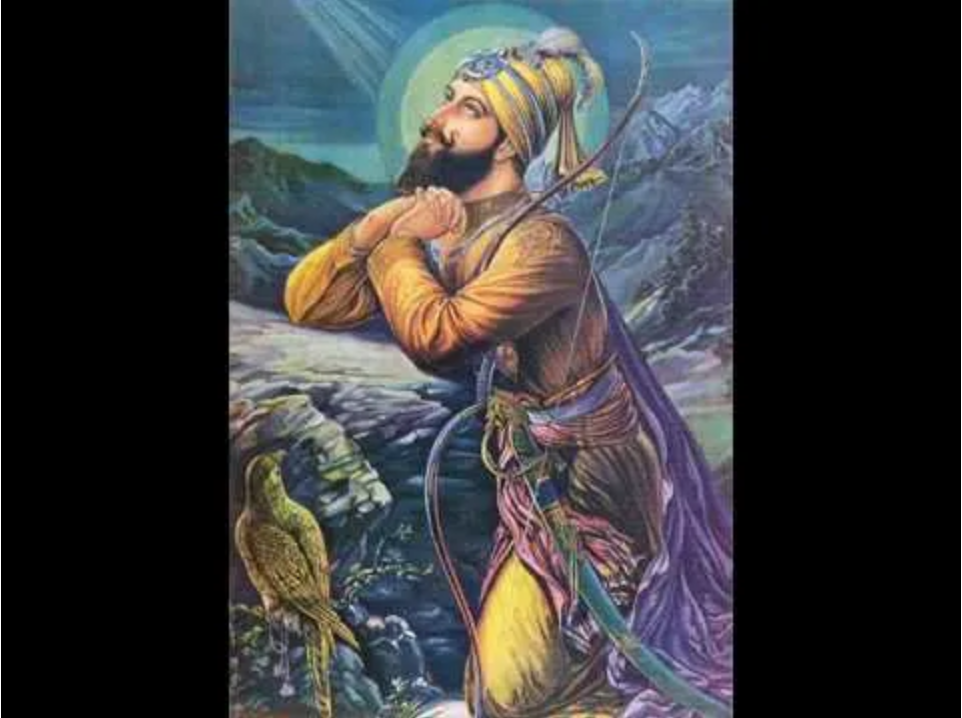 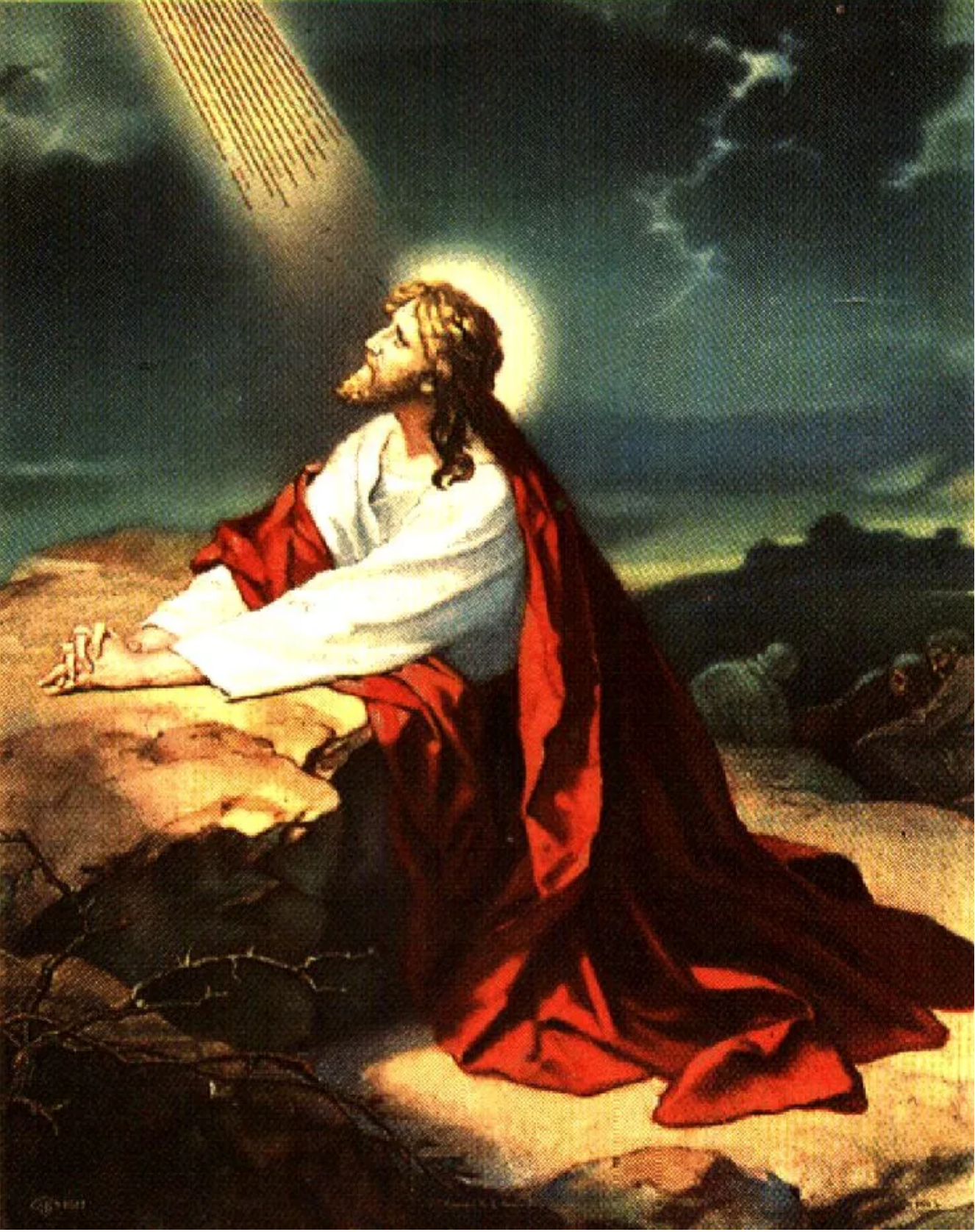 An artist is able to express what philosophies cannot? This is one case of an artist expressing what Sikh philosophy DID NOT want expressed. While Gurbani tells us that God is Within us, this artist has been able to imitate a portrait of another prophet depicting our Guru “praying to a God sitting high up in the heavens”! 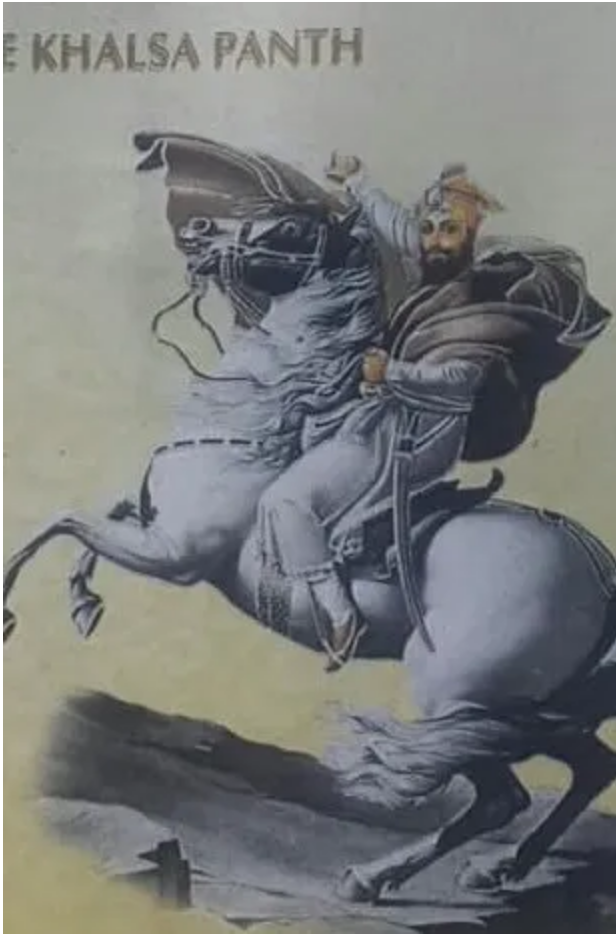 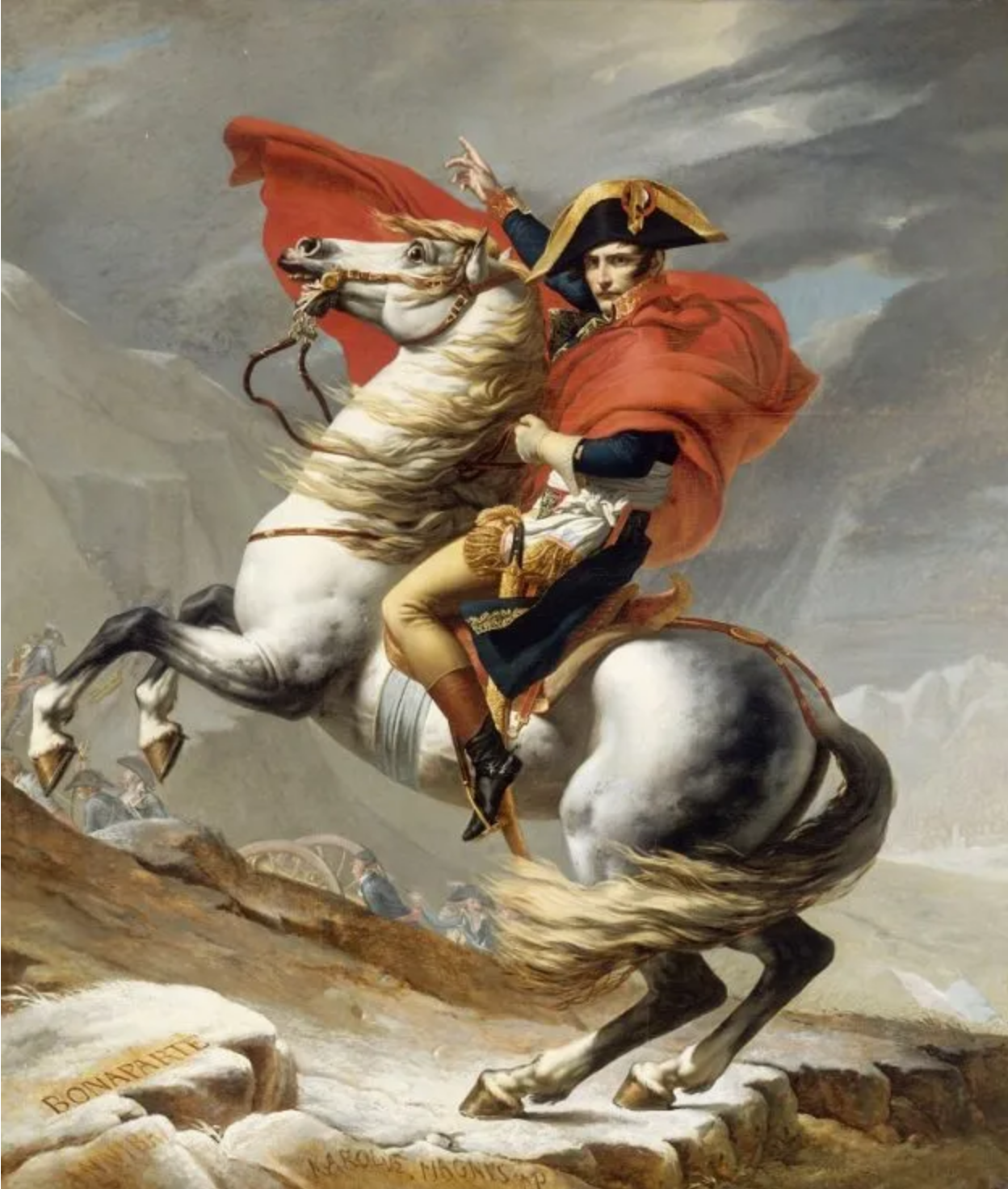 Here is another case of an artist who has relied on a propaganda poster of Napoleon Bonaparte to express something Sikh philosophy never needs. Napoleon’s portrait is an attempt by a 5 feet tall general to give himself a false stature of height and power. The picture of him on a horse with its fore limbs up gives him just that. He had an artist paint the background showing dark clouds – to show he was leading France away from dark times. He had his finger pointed upwards to show he was leading France into the future.


Do we need such a “philosophy “to be associated with Guru Gobind Singh? Be we have, thanks to the “aesthetic experience” of a plagiarist artist.


Finally, if painted portraits of our Gurus are fine, then what do we say of stone, metal or wooden statues of them. Going one step further, what about human beings who claim to be embodiments of our Gurus?

Thank you for breaking all the false walls.

Again more myopia. Don't do the Ardas if you don't want to remember the messenger it's pointless by your reasoning.

Guru Gobind singh Ji was a patron of the arts, for why else does Paonta Sahib exist? Poetry, calligraphy all sorts went on there. The detailed frescoes in Old Gurdwaras were not made by people who valued the Guru Granth Sahib any less they made these frescoes on structure intended to house the same.

Maharaja Ranjit was not really someone who lived according to gurmat so what quandary we now find ourselves in that he devoted so much of his wealth and effort to creating Gurdwaras for the installation of SGGS, its opposite to your logic.

Renaissance is a joyous celebration of the arts, to have lived amongst such luminaries fills me with wonder and I in no way think less of the Gurus bani.

I will agree with the plagiarised art it is too uncanny to be ignored but also a very small part of Sikh arts.

Please also read The Sikh Memory by Gurbhagat Singh to understand how Sikhs render their historical memory differently and uniquely to other nation's. You know when someone sees something which hits their heart and mind with bolt of lightening telling them "I'm nothing believe in my bani" isn't going to make them forget, no they will want to share the radiant form of their master with others.

I attended the funeral of a great lady who had told her loved ones that in no certain terms were they to do more than her last rites when she passed, her family filled the funeral hall with red roses and in the sea of flowers I didn't see any hatred for the deceased. See how silly this argument is, is anyone awake?

I think alot people have read the account of a Sikh who answered a survey from Maharaja Ranjit singh if there was anyone alive in his kingdom who had set eyes on the Guru, the man who had was mentally imprinted for life, he hadn't seen such a form before, don't we have the right to this information be it visual or in words.

Why myopic? Because this reasoning suffers the same pitfalls, our bani is for much more than what you use it for.