Brampton council has decided to rename a section of Peter Robertson Boulevard after the founder of the Sikh religion, Guru Nanak.

While part of Peter Robertson Boulevard will continue to carry the former Brampton mayor’s name, the section between Dixie Road and Great Lakes Road will be renamed “Guru Nanak Street” or “Guru Nanak Road.” 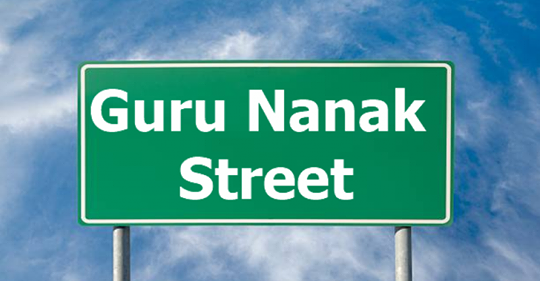 “City of Brampton public works and engineering staff were directed to immediately undertake the renaming in time for Guru Nanak’s birth anniversary, also known as ‘Gurpurab,’ which will be celebrated globally by both Sikhs and non-Sikhs alike,” Dhillon said in a news release.

He added the Guru Nanak Mission Centre Gurdwara is the only municipal address on the stretch of road to be renamed.

The center endorsed the name change and expressed their appreciation on behalf of the city’s Sikh population, which numbers approximately 200,000.

The city will announce the date of the official renaming ceremony after the change is approved through the normal processes at the Region of Peel.

“Brampton is home to one of the largest Sikh populations in the world, and have contributed greatly to the social, economic, political, and cultural fabric of our great city,” said Dhillon.

“I am proud our council has moved to celebrate its vast cultural diversity, which includes people from all different religions, backgrounds, and ethnicities,” added Singh in the release. 
The Gurbani Framework is a response to a variety of distorted translations...