Christianity Passion Of The Christ

I just finished watching Passion of the Christ. I had never seen it before. It was so intense and when the movie was over, I couldn't move for a few minutes. And I also felt I understood Jesus' suffering as never before.

Here is a link to the movie on Youtube. Its the whole movie, but doesn't include the opening and closing credits.

For those who have seen it, how do Sikhs respond to Jesus and his teachings and how he suffered and was crucified? I know Muslims don't believe he actually ended up on the cross; they believe someone took his place. And I know of some really awesome teachings amongst Hindu scholars who show the mystical qualities of Jesus' teachings.

You may be interested in the following two posts,

They are rather direct but not to offend. I will take the "Turk" reference to kind of also apply to Christians. Even though one should not generalize so there may be an error in such an approach and I beg a pardon before hand.

PS: If someone made a film of the following it will be quite revolting too, 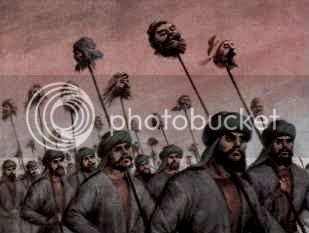 [FONT=Georgia, Times New Roman, Times, serif]William Irvine describes the course of events in his Political History of the Sikhs : [/FONT] [FONT=Georgia, Times New Roman, Times, serif]‘Every day a hundred brave men perished and at night their headless bodies were loaded into carts, taken out of the city and hung on trees. It was not until June 9, 1716 that Bandha himself was lead out to execution, all efforts having failed to buy him off. They took him away to the old city where the red Qutb Minar lifts its proud head of white marble over the crumbling walls of the Hindu fortress. Here they paraded him around the tomb of the later emperor, Bahadur Shah and put him to barbarous death. First they placed his child in his arms and bade him to kill it. When he refused they ripped open the child infront of his fathers eyes, thrust his quivering flesh into Bandhas mouth, with hot pincers they tore out his eyes and hacked him to pieces limb by limb.’[/FONT]
Click to expand... 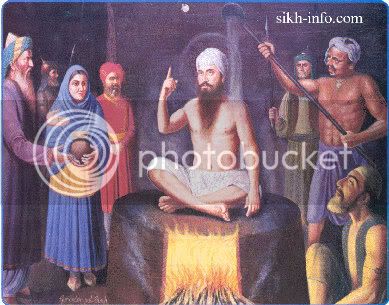 Above a depiction of Guru Arjan Dev ji's killing by Muslim rulers. Guru ji collected most of the Gurbani in SGGS and organized, collated it as well as penned quite a bit himself. Story is that he was seated on hot plate while hot sand was poured over him. He was then taken for a dip to a near river so that the blisters develop and be ever more painful. He returned to the creator in this process.

Sikh body proper was cured in such kilns. The result was not revenge-fullness or hatred but the building of a spine to stand and be counted. It perhaps has become severely diluted over time.
Last edited: Oct 19, 2012

It's an excellent film and I would recommend it for anyone interested.
The teachings of Jesus are not mentioned much in this movie as it is about the final 12 or so hours.
But I find that most of the teacings of Jesus are in line and somewhat similar to sikhi philosophy.
I don't find anything absolutely anti-sikh in any way.

My first real introduction to God was Jesus and the bible, as I was raised in a predominant white UK where every kid carried their own copy of the bible.
So the influenceof christianity was an important factor in my life on many accounts, hence I still use the words God and Lord very openly on here unlike other members who may find it a little alien.
P

It seems that Re-establihing of TRUTH is a cyclic process.And every time the process of re establishing of TRUTH has never been an easy task .This is clear from all such incidences may be related to the lives of Jesus,Mohammad Sahib or Sikh GuRu.or any
other incidences I may not be knowing.

But TRUTH usually hurts a lot and for this TRUTH also has to suffer a lot.

My first memory of the Christian church. My father was an Episcopal Priest. I was in the nursery. Everyone gathered around an alter and sang "Yes Jesus Loves Me." I asked one of the matrons who Jesus was to which she replied, "Aren't you Father Siefferman's son?" I told her I was. She then in some oddly placed horror suggested I ask my father that question. He found the whole thing very amusing.

The really odd thing was, even at that tender young age, I didn't buy it. I got the whole explanation over time, and nothing ever changed that. I did however believe in God. I felt like his presence, power, and awareness were everywhere. It made no sense to me that anyone could attribute negative, ugly, human emotions like anger, vengeance, and jealousy to a divine and perfect being such as God.