The influential governor of Pakistan's Punjab province, Salman Taseer, has died after being shot by one of his bodyguards in the capital, Islamabad. Mr Taseer, a senior member of the Pakistan People's Party, was shot when getting into his car at a market.

Interior Minister Rehman Malik said the guard had told police that he killed Mr Taseer because of the governor's opposition to Pakistan's blasphemy law. Many were angered by his defence of a Christian woman sentenced to death. Prime Minister Yousuf Raza Gilani declared three days of national mourning and ordered flags lowered to half-mast. He also ordered an immediate inquiry into Mr Taseer's killing and appealed for calm. Dozens of PPP supporters have taken to streets in Punjab's capital, Lahore, burning tyres and blocking traffic, the AFP news agency reports.

It is the most high profile assassination in Pakistan since the killing of former Prime Minister Benazir Bhutto, the PPP's leader, in 2007. Mr Taseer, 66, was shot several times at close range by his Elite Force guard as he got into his car at the Kohsar Market, a shopping centre in Islamabad popular with Westerners and wealthy Pakistanis, Mr Malik said. 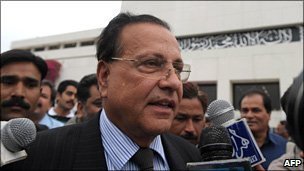 Salman Taseer was politically close to the president

"The governor fell down and the man who fired at him threw down his gun and raised both hands," Ali Imran, a witness, told the Reuters news agency. Unconfirmed reports say up to five other people were wounded when Mr Taseer's other bodyguards opened fire following the attack.
It is believed Mr Taseer had been returning to his car after meeting a friend for lunch at a nearby restaurant. He had previously been to the presidential palace, the Senate and the interior ministry.

At a news conference in the capital, Mr Malik said: "The police guard who killed him says he did this because Mr Taseer recently defended the proposed amendments to the blasphemy law."

The assassination of Salman Taseer once again highlights Pakistan's unending troubles. He was a high-profile leader of the PPP, and was governor of the country's largest province, Punjab. His death has left the country in shock at a time when it faces an imminent political crisis.

On the face of it, the assassination appears to be an individual act of a police guard in Mr Taseer's security detail. The guard has reportedly said he killed him because Mr Taseer publicly opposed the blasphemy law. But the timing of the assassination holds deeper implications for the government, which is struggling to shore up political support to maintain a majority in the parliament. Whether it gets this support will be decided by one of two major political forces of Punjab - the opposition PML-N and the PML-Q parties. The assassination has the potential to upset these negotiations.

Mr Taseer made headlines recently by appealing for the pardon of a Christian woman, Asia Bibi, who had been sentenced to death for allegedly insulting the Prophet Muhammad. Friends of the governor say he knew he was risking his life by speaking out. "I was under huge pressure sure 2 cow down b4 rightist pressure on blasphemy. Refused. Even if I'm the last man standing," he wrote on Twitter on 31 December.

Asked earlier that month by the BBC Urdu Service about fatwas, or religious decrees, issued against him, he criticised "these illiterate" clerics.
"They issued fatwas against Benazir [Bhutto] and Zulfikar Ali Bhutto [her father, an executed former president], and even the founder of the nation, Muhammad Ali Jinnah. I do not care about them," he added. 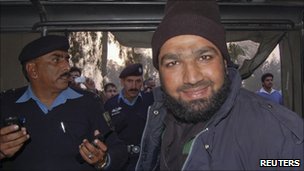 The interior minister later identified the murder suspect as Malik Mumtaz Hussein Qadri, who he said had escorted the governor from the city of Rawalpindi on Tuesday as he had done on five or six previous occasions.
Mr Qadri was 26 years old and from Barakhao, a town on the outskirts of Islamabad, he added. "Salman Taseer is a blasphemer and this is the punishment for a blasphemer," Mr Qadri said in comments broadcast on Dunya television.

Mr Malik said Mr Taseer's Elite Force security detail was provided by the Punjab government, and that its members had been thoroughly screened. However, they have all been arrested as part of the investigation.

"He was a very good friend, a politician and a businessman. He was a national hero we have lost him," Rehman Malik added. Human rights workers said Pakistan had been robbed of a rare voice of courage, who championed women's rights and supported minorities. The BBC's Aleem Maqbool in Islamabad says Mr Taseer, a close associate of President Asif Ali Zardari, was one of Pakistan's most important political figures and his death will further add to instability in the country.

The PPP-led government is facing a crisis that erupted after its junior coalition partner, the Muttahida Qaumi Movement (MQM), quit on Sunday. Mr Taseer had said it would survive. "Prezdnt Zardaris total support of PM has once again silenced rumours of split in PPP top leadership. Govt is here till 2013," was the last tweet he wrote on Tuesday.

Shortly before Mr Taseer's death, the opposition Pakistan Muslim League (PML-N), led by former Prime Minister Nawaz Sharif, had announced that it would not demand a vote of no confidence in Mr Gilani because to do so would exacerbate instability.

Interior Minister Rehman Malik said the guard had told police that he killed Mr Taseer because of the governor's opposition to Pakistan's blasphemy law. Many were angered by his defence of a Christian woman sentenced to death.
Click to expand...

As usual moderate muslims become the first target of hardliners in islamic countries.

This is only the tip of the iceberg.

How complete is the talibanisation of West Punjab? Is this an isolated incident or part of a pattern? I would think the latter.

Not so long ago an inspiring man that rescued child soldiers from the taliban and made them into human kids again was also murdered. Moderates are being wiped out in Pakistan. Then you've got the recent clashes in Egypt which is traditionally been a moderate tolerant country. The reports about the number of converts leads me to believe that there is brainwashing involved esp considering the statements they make. What next? :8-
K

Those favouring the person indulged in blasphemy are themselves blasphemous, they announced. Paying glowing tributes to Malik Mumtaz Hussain, and his courage, who killed Governor Salman Taseer, they said he is lover of the Holy Prophet (PBUH) and is a ‘Ghazi’. Mumtaz had revived the 14-century-old tradition of Islam and put their head high in pride. It was only Prophet (PBUH) who could forgive any act of blasphemy but none other could ever do it.

They asked the rulers to save their faith by announcing that they would desist from attempting to amend the law of blasphemy. Asim Hussain adds from Lahore: Leaders of majority of religious parties desisted from expressing their views on the murder of Salman Taseer, while others gave a guarded response, saying the slain Punjab governor had been inviting such kind of reaction for quite some time.

He had continuously been violating the constitution of Pakistan by supporting an amendment to the blasphemy laws and interfering in the judicial process of the blasphemy convict Aasia Bibi, though he knew well that Muslims were very touchy on the matter, they said while talking to The News.

Some religious leaders like Jamiat Ahle Hadith President Prof Sajid Mir and Jamaat-e-Islami leader Dr Farid Piracha, however, condemned the murder saying Islam forbids people to punish even the criminals by taking the law into their hands.

Jamiat Ulema Pakistan (JUP) President Abdul Khair Mohammad Zubair said Islam strictly forbids taking the life of anyone without judicial or state order, but added that Salman Taseer had shown utter disregard for the religious sentiments of the entire nation.

The mobile phone of Sahabzada Fazal Karim, chairman Sunni Ittehad Council, remained switched off throughout Tuesday evening. A spokesman for Jamaat-e-Islami Ameer Syed Munawwar Hasan said he was not feeling well and could not be available on phone. The spokesman also expressed his helplessness to obtain any formal statement on the issue saying that any statement on the matter would be issued on the next day after consultations. Other main leaders of the Sunni Ittehad Council - Haji Hanif Tayyeb, Dr Ashraf Asif Jalali, Sarwat Ijaz Qadri - were also not available.

Tahaffuz-e-Namoos-e-Risalat Mahaz (TNRM) leaders held an emergency meeting after receiving the reports of murder of Salman Taseer. The meeting, chaired by Razaul Mustafa Naqshbandi, continued for two hours. Later, in a statement the TNRM said Taseer had been violating the laws of the land by supporting a blasphemy convict, Aasia Bibi, from day one. His irresponsible acts from the high office of the Governor of Punjab were inappropriate and offending 170 million Muslims of the country.

Meanwhile, Sunni Tehrik Lahore President Mujahid Abdul Rasool said Muslims should not attend the funeral prayers of Salman Taseer since he had wilfully committed blasphemy and shown disrespect towards protecting the honour of the Holy Prophet (PBUH).

Just look at the smile on the face of the killer... diabolical!

Just look at the smile on the face of the killer... diabolical!

No doubt he considers himself a martyr...