Last December, I heard about Bhai Gurbaksh Singh ji and how he went on hunger strike for 64 days to raise awareness for Sikh political prisoners still trapped in Indian jails. At the time, I was also fasting for reasons of my own. I was unaware of his struggle when I had started experimenting with something called, intermittent fasting. Something fitness experts recommend for health purposes. So while I was experimenting with fasting, Bhai Sahib was doing his hunger strike and was 40 days into it.

What I found during my fasts was that it was not easy to stay hungry for hours on end. When I didn't eat anything for 4-5 hours, eventually the hunger desire became really powerful and it just consumed all my thoughts and mental faculties. And I couldn't think about anything else but eating. Now I can go on without eating for hours and hours, if I get into the zone while painting. But that doesn't always happen to me and it didn't happen everytime I fasted. It was at those times I realized how hard it was to be in control of the hunger desire. 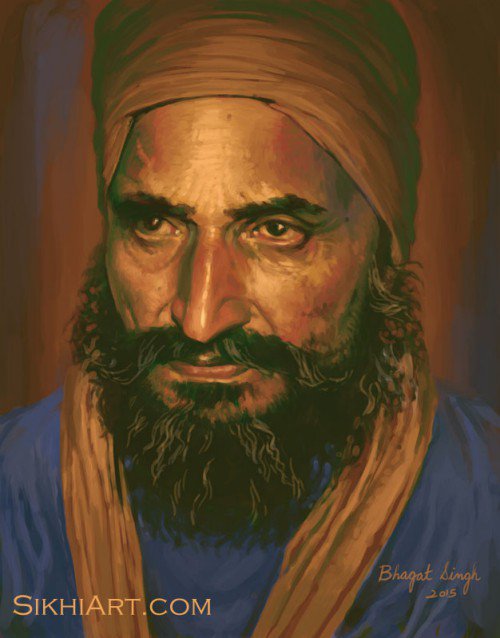 Bhai Sahib had been doing it for over a month now. In this immense fire, Bhai Sahib had already spent 40 days. Simply incredible! So when I heard about him, his example just immediately struck me, I could relate to him. He was being strong in the face of suffering and his example made me realize the strength it takes to be in remembrance of Waheguru, in the face of our strongest desire, hunger. He's an incredible example of a warrior who fights through shear willpower because remaining hungry for 64 days is no small feat.

I later found out why he was doing the hunger strike. I thought this was a great way to raise awareness of the issues around political prisoners. I was not aware that there were men being held in prisons, who were jailed for political crimes a long time and still stuck there to this day. Bhai Gurbaksh Singh was fasting in order to get authorities to look into their cases and free them. He was raising a lot of awareness around the issue and at that point I was awe-struck. So I wanted to do whatever little I could to support his cause.

I looked up Bhai Gurbaksh Singh, when I saw his photo. He had a very strong face with very soft eyes. I wanted to paint him and try to project his inner willpower onto the canvas. I wanted to show someone who was in pain but was beaming with positive energy amidst all of it.

The issue with the trapped political prisoners has not settled yet. Bhai Gurbaksh's condition became critical and the sangat asked him to end the strike, at the end of 64 days. If we really care about this issue we have to take the torch from his hand and carry it further.

In this 6 minute video, I paint a portrait of Bhai Gurbaksh Singh ji from start to finish.

Step 1
I start with a sketching his face and refine it until I think it's good enough to start painting. I make sure to capture key features. For portraits, I would say the eyes are the most important of all. The whole face is important, however the eyes are key to conveying subtle emotions. So it's very important to paint the eyes well.

Step 2
I quickly block in different colours, brown, green, red and violet. All the colours I see in his face, I exaggerate them a bit, and spread them over the canvas.

I like to paint with dark colours personally. It gets my imagination going. It is kind of like looking into the darkness at night, you become focused and start to see all kinds of shapes and figures.

Step 3
Now using the palette I have created, I begin to paint his face. I shape and mould the darks and lights.

I keep several photos of him open on a second monitor and study his facial structure as I paint him.

Step 4
I experiment with different backgrounds, and paint in the rest of the body. At first I stick with the palette I have and give him a green chola. However it looks off and so I change it to blue. Blue complements with the orange and brown tones of his skin and it naturally fits into the composition.