SPNer
A humanitarian campaigner was left feeling humiliated when a member of airport security joked about finding a bomb in his turban. Ravi Singh was confronted by staff on his way back to the UK after helping Yazidi women who were enslaved by ISIS in Iraq. Despite feeling hurt by the jibe, Mr Singh says education is a much better way forward than punishment. The founder of Khalsa Aid was changing flights at Vienna International Airport on Friday when he let security staff swab his turban. He walked through the metal detector without setting it off, but a member of staff then insisted on giving his headdress an additional scan with a handheld device. When he asked if there was a problem, one of the security workers said: ‘Yes, we found explosives’.
Mr Singh told Metro.co.uk: ‘If I made that comment I would be thrown in jail. I was so upset.’ He said the member of staff was ‘smirking’ when she first made the comment but got ‘very upset’ and went ‘very red’ with embarassment when Mr Singh challenged her. ‘She said “no I will not apologise,” I said “I want an apology now”,’ he added. He says another member of staff refused to give his name and that he had to go back through security towards the airport’s entrance to make a complaint. 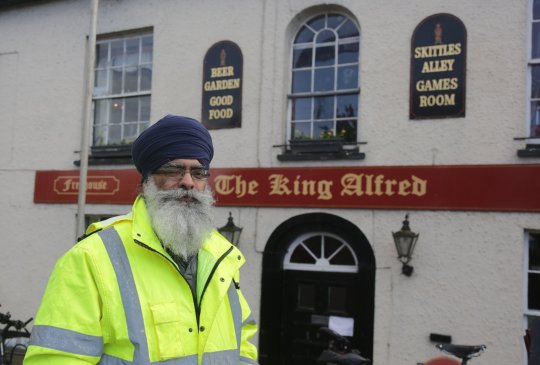 If it weren’t for his flight being delayed he may well have missed his flight to London. Mr Singh had been on his second visit to Iraq in three weeks, as part of a new project helping Yazidi women who were captured by ISIS. He was also there for a memorial ceremony for the 2014 Kocho massacre in which over 400 men in the village were slaughtered. Women were taken as sex slaves and young boys were forced to fight for the death cult. The work he has done to help victims of terrorism makes the ‘joke’ in Vienna all the more ironic.

But Mr Singh forgives the woman who made the remark and has asked airport management if he can sit down to calmly teach her about his faith. He added: ‘I wouldn’t feel good if the person was sacked. You can’t answer hate with hate, it will never work. You will only fuel more hate.’

Mr Singh, from Slough, says many of his Sikh and Muslim friends have grown increasingly worried about being targeted. He added: ‘There’s a big concern in the Sikh community as well as the Muslim community. There’s a fear over a rise in hate crime. ‘After 9/11 I personally had milkshake thrown at me, people shouting from their cars.’ He says he was not particularly worried about racism when he moved to the UK in 1981. Earlier this year, Britain’s first turban wearing MP Tanmanjeet Singh Dhesi warned of a rise in Sikhs being targeted with Islamophobic abuse, despite being of a different faith. He blamed the 2016 EU referendum campaign for opening a ‘Pandora’s box of hatred’, enabling racists to feel more at ease with their bigotry.

Jasveer Singh, of the Sikh Press Association said: ‘There is a long held conflation by many in the Western world between the physical appearance of a Sikh and that of a terrorist. ‘It seems anyone with a beard or brown skin or a head-covering can find themselves labelled as ignorantly as Ravi Singh was. ‘The fact many Sikhs have all three is why we so commonly face the brunt of this racist and ignorant mindset. ‘Establishments that claim they are not in support of such low-brow, mistaken racial profiling need to do more, specifically when it comes to awareness of the Sikh faith, and airports across Europe would be a great place to start.’ Responding to Ravi on Twitter, a spokesperson for Vienna Airport said they are investigating the incident. They added: ‘We apologize for the incident, this does not match our understanding of customer service.’ Metro.co.uk has contacted the airport for further comment.
You must log in or register to reply here.
Share:
Facebook Twitter Reddit Pinterest Tumblr WhatsApp Email Share Link