Operation BlueDisgrace: From An Interview With Giani Pitam Singh Ji

Interview with Giani Pitam Singh ji, then Head Granthi of Siri Akal Takht Sahib on Blue Star ( From his book "Diary De Panne"). English Edition of this Book will be published within next 3/4 months. 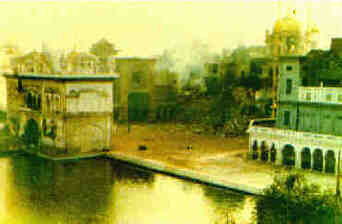 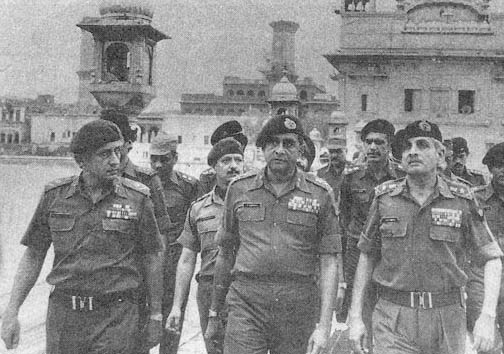 On the night of 6-7 June, we stayed at the house of the helper. The armymen knocked at the door on June 8. They asked us why we were staying there. I told them about myself and gave them information about the accompanying employees. We showed them our identity cards. They said that all of us were terrorists. They called for more force and searched the house but they did not find any weapon or objectionable thing there. Then they stripped us all and made us to stand in one line with only our underwears. The lady was the last in the line. Those army men had one Light Machine Gun (LMG). When they were going to shoot us, one of them said, "There are only two bullets in this magazine. Load the gun with a new magazine." There was a Sikh soldier among the previous armymen. He immediately rushed to Major Rattan Singh of Haryana Jat Regiment and brought him on the scene. They were about to shoot us when Major Rattan Singh came there and said, "Stop. Send them to me at the Temple in Kathian Wala Bazar." We put on our clothes.
We went towards that side. We saw about 30-40 Sikhs with their hands tied on the backs sitting in the street and being hit by rifle butts, sticks, and boots. Major Rattan Singh asked us, "Are you terrorists?" I told him that I was the Head Priest of Sri Akal Takht Sahib. He said, "Why did you not surrender when we made the announcement?" I told him that we were inside the quarter of the SGPC and that we did not hear any announcement. He said that no concession would be given to any terrorist that day. We were searched and the money in our pockets was taken away. An army Havildar asked me, "Are you a Sikh or a Muslim?" I replied, "I am a Sikh of Guru Ram Dass and was serving my Guru." That Havildar abused me and put the point of his gun on my chest saying, "Call your Guru Ram Dass to help you." I heaved a deep sigh and felt that the army was challenging my Guru. I thought of the Guru in my mind and prayed, "O Divine Master! Justify your name and save your devotee." In the meantime, Rattan Singh came there on a round. Some Hindus had brought food, etc., for the soldiers. They recognized me and requested the Major to spare me. He called me towards him and made me sit on a chair beside him. The Guru had himself helped his devotee and saved his honour.
I told the Major that the army was supposed to be disciplined and to exercise restraint but his army was not following any principles; they were acting like butchers. Perhaps he felt pity and took me in his arms saying, "I will try my best to save you." Then he talked to the Area Incharge on wireless. Thereafter, he said to me, "You are a religious man. Please speak the truth when I ask you certain questions." I replied, "I will speak only the truth." He asked, "Are all the 12-13 people with you employees of the SGPC?" I testified to this fact. Then he asked me about another 40-50 people. I did not know them. I, therefore, said that they might be new employees whom I did not know. He said, "All of them are terrorists." (Later, they were all killed.).
The Major told me that he could not acquit me in any way and thought it better to send us to the army camp from where they would be released after a few days. Therefore, a soldier led us to Bazar Mai Sewan. We saw the death bodies of many Sikhs on the way. We were brought to the army camp from Faqir Singh's shop in Bazar Mai Sewan. From there, we were brought to Darbar Sahib during a meeting of the Sikh High Priests (Sikh Sahiban) and released thereafter.