Loss of immense religious heritage has been a recurring regret for Singapore-based author Amardeep Singh during his travels...

In search of a gurdwara in the nondescript town of Topi in Pakistan, Amardeep Singh is led into a sunlit courtyard by a young turbaned boy. It is a private gurdwara in the house of Munshi Ram and he suddenly finds himself greeted by a glistening, tasselled ‘Happy Birthday’ bunting with the words ‘Guru Gobind Singh Ji’ pasted with sparkly tape just below in Gurmukhi. The modest but richly decorated room wishing the 10th Guru a happy birthday is the place where the family has enshrined their Guru Granth Sahib. 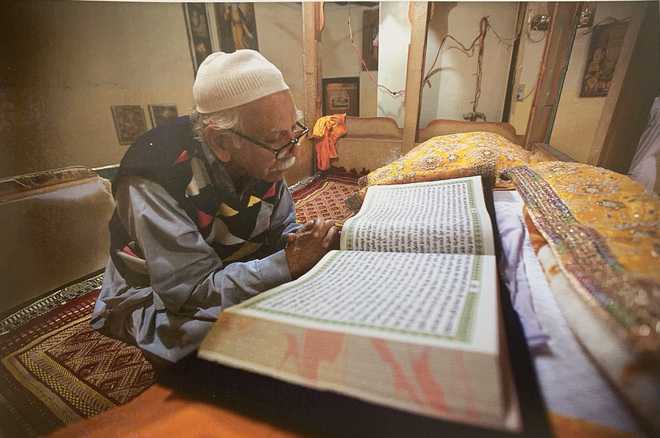 This little pocket of Sikhism in the heart of Pakistan is among the many places this intrepid 52-year-old traveller from Singapore discovered during his travels. The gurdwara is a testimony to the carefully protected Nanakpanthi legacy, which has survived the ravages of time and pain of Partition. Four and a half years since he first initiated a quest into the origins of the Sikh legacy which he inherited from his ancestors, he has traversed 126 cities and villages in Pakistan in the course of two visits. Amardeep Singh, a banker-turned-author, is now documenting Guru Nanak Dev’s various udasis (spiritual travels) undertaken on foot across nine countries, through a documentary Allegory — A Tapestry of Guru Nanak’s Travels.

In the Guru’s 550th birth anniversary year, he is working on the Indian leg of the project, estimated to be completed by late 2021. Already having visited Iran, Iraq, Tibet, Saudi Arabia, Bangladesh, Pakistan, Sri Lanka and Afghanistan, he has traversed tough geographies and armed conflict zones. Singh’s two books, Lost Heritage: The Sikh legacy in Pakistan (2016) and The Quest Continues — Lost Heritage: The Sikh Legacy in Pakistan (2018) and documentaries opened up a hidden world, at times providing Sikhs the first peek into West Punjab’s societal and monumental Sikh heritage. He says Pakistan encapsulates “80 per cent of the landmass where our glorious chapters turned,” leaving the ‘tail end’ of the erstwhile Punjab to India.


Amardeep’s travels across Pakistan repeatedly assert that the truth about Sikh legacy is much more diverse than the popular Sikh narrative running through East Punjab. A Bhagwadgita in Gurmukhi at the Asamai temple in Kabul, a congregation of Muslims partaking langar at a Dhaka gurdwara every Friday, the tomb of Hari Singh Nalwa at Jamrud built by Babu Gajju Mal Kapoor of Peshawar, a gun-toting Muslim woman introducing Amardeep to a shelled gurdwara sharing memories of the now gone Nanakpanthis in Afghanistan... Amardeep’s varied experiences bear testimony to the composite Sikh culture deeply impacted by Hindu, Muslim, Sufi, Jain, Sindhi and Pashtun influences.

“After Partition, the Sikh legacy was protected in pockets. Outwardly they don’t appear Sikhs but across Sindh, Balochistan and all the way up to Afghanistan, Nanakpanthis have kept the faith. They might bear Hindu names but their belief system is Sikh. This community is of utmost value and needs to be protected.”

On the number of Sikhs in Pakistan, Singh says, “After Partition, riots hit the area up to Peshawar. Westwards from there till Afghanistan, 1,500 Sikhs were left. These have now multiplied to 13,000. They are Pashtun Sikhs. Pakistan considers them Sikhs and they deem themselves Sikhs too. However, Nanakpanthis far exceed this number. I believe there are close to 8,00,000 in Pakistan. However, people in Pakistan neither understand this culture, nor the Sikh narrative on this side.”

Majority of the Pakistan gurdwaras he has travelled to have fading or lost frescoes bearing heart-breaking reminders of what buildings might have looked like. He says, “My second book documents a fresco of a woman leading a hunt. I estimate the fresco is at least 180 years old. Back then, gurdwaras had frescoes on women empowerment. Today where are we? Frescos made centuries ago show Guru Nanak in myriad styles, Shravan Kumar who has nothing to do with religion but represents Indian value system, Bhagat Kabir, Jogi and martial traditions, Ram, Lakshman and Sita. But today, Shravan won’t a find place in a gurdwara. The Nanakpanthi culture of the belt reflected art free of religious bindings.”

Almost the same is true for gurdwara architecture. Some of these lie abandoned, some have been turned into libraries... The architecture is diverse and bears Islamic, Sufi and Hindu influences. Some look like forts, others like temples with glimpses of palanquin style windows found in Rajasthan. However, in East Punjab gurdwaras, we have standardised the structure and limited diversity and scope for art, architecture, etc.”

In search of a gurdwara in the nondescript town of Topi in Pakistan, Amardeep Singh is led into a sunlit courtyard by a young turbaned boy.