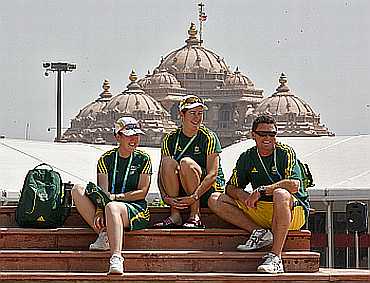 Australia, which has been severely critical of Commonwealth Games arrangements, expressed satisfaction over the preparations and sought to downplay the remarks of its Prime Minister Julia Gillard cautioning her countrymen while travelling in India.

Three days after India took exception to Gillard's comments with regard to security here, High Commissioner Peter Varghese said, "I don't think we should read too much into it" as she only stated the "factual material" in the travel advisory.

- India will win 70 medals at the Games: Kalmadi

He said Australian authorities are "impressed" with the "strong commitment" and "vigour" on their part with regard to security arrangements.

Noting that Games preparations have been a "high-profile issue" in Australia, Varghese said, "In our system, that (making such a statement) is a typically normal thing for the Prime Minister to do at a time when there is a high level of public interest and the Prime Minister's comments were related to factual material in the Australian travel advisory."

Gillard had last week said, "Our travel advice has made clear that there is a high risk of terrorism in New Delhi and since 2000 there have been at least 14 major terrorist attacks in New Delhi."

Reacting to this, India said terrorism recognises no boundaries but there was no need for concern as adequate measures had been taken to ensure security of the visitors.

Asked about the Games preparations, Varghese expressed satisfaction and said a big contingent of sportspersons from his country is expected to participate in the event.

"Some athletes have already arrived yesterday. I think, by and large, they are satisfied with the arrangements and the accommodation. It has been a good start," he said.

The envoy was satisfied with the security arrangements in Delhi, particularly at the Commonwealth Games Village.

"We have also been in very close consultations with Indian authorities on security arrangements. We see a very strong commitment on the part of the authorities to ensure safe and secure games.

"We have been impressed with the vigour in which they are pursuing and planning and the resources are being put into the security arrangements," he said.

Asked about reports of some Australian athletes pulling out of the Games, he said it was possible that individual athletes may pull out for one Organising Committee are taking steps which "we appreciate."

The players too were happy with the arrangements.

"It has been pretty good. The dining hall is fantastic, it is same as Melbourne. And the security is top notch out here. I feel completely safe and secured," said lawn bawl player Lynsey Armitage.

Elated over her first of its kind experience in the country, Lynsey said, "Being in India is a life-time opportunity." The facilities also impressed Australia's Press Attache, John Gartfield.

"We are really very happy with the facilities. The Commonwealth Games village is superb. Dining area, practice venues, residential complexes are really better. Our athletes are not facing any problem here," said Gartfield.

However, with a little over four days to go for the opening of the Games, The Times, London says concerns abound over the safety of 16 major structures built or renovated for the extravaganza.

These include venues in which competition will be held, says The Times, London. The suspect venues include those for badminton and squash, hockey, boxing, diving and the practice rugby stadium, it said.

The Times added: The chief technical examiner of the Central Vigilance Commission, India's highest government watchdog, found evidence two months ago that safety certificates at the 16 projects had been falsified to cover up "poor quality work".

Meanwhile, Delhi chief minister Sheila Dikshit assured that "everything will be in place" and Commonwealth Games Village and venues will be made "spic and span" before the commencement of the sporting extravaganza.

"All the work at Jawaharlal Nehru Stadium, Commonwealth Games Village and other venues will be over and everything will be in place before the commencement of the Games on October 3," she said.

She said that even in other countries the work continued till the inaugural ceremony and "such thing do happen but I can assure you that everything will be in place".