Now, A Model-hunt For Sikhs! 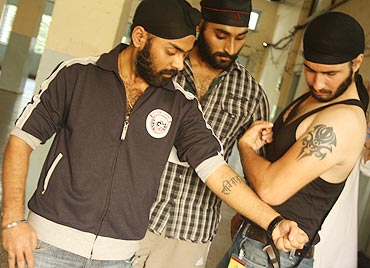 Mahinder Singh stands at a little over 6'2". Wearing a checkered turban and a grey tee-shirt, he is something of a gentle giant.

Yet his presence can be quite intimidating, especially when he twirls his moustache and gives a look that can make your bones rattle.

The 20-something Sikh from Delhi tells you that he is the 'editor-in-chief' of a newspaper called Today's Star.

Mahinder adds earnestly that his newspaper covers everything.

Mahinder is one of the finalists for Mr Singh India 2010.

The Sat Sri Akaal Charitable Trust in Mumbai organises the annual contest, which is now in its fourth year.

Mahinder, along with 19 others, was chosen after a nationwide search that started a little over two months ago and has been training at a gurdwara complex in Mumbai's Dadar area for a week now.

The idea behind the contest is to spot the best-looking Sikh in the community. 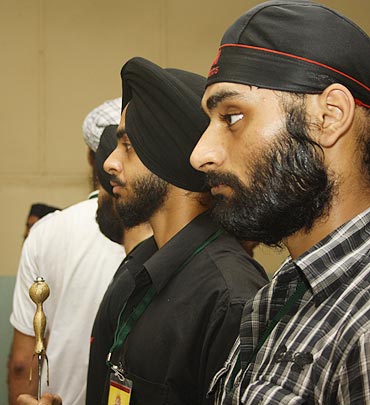 The strapping young men rise at 6 am every morning. They visit a neighbourhood gymnasium that the organisers have tied up with.

A little after half past eight, they are back in the complex that has been their home for the last week or so. Here, they bathe and freshen up before they start the long day ahead.

The quiet in the complex is deafening. Even as the city wakes up to its daily chores, the place of worship is a picture of calm and solitude.

The third floor where the boys stay is also quiet. They go about their activities in a surprisingly orderly manner.

Some of them take the time to call home.

Around 9 am, they will visit the gurdwara on the second floor where they will kneel before the shrine, say a silent prayer, go around it, fan it and kneel again.

Then they sit by themselves in one corner and read out softly from a little book. Occasionally their voices rise when they hail Guru Nanak.


After the prayer, they walk upstairs to the rehearsal hall. This is where they spend most of the day practicing their entry and moves.

The hall is sprawling -- spread over approximately a few thousand square feet -- with a high ceiling, cross ventilation and old-fashioned fans.

You imagine it being used for small ceremonies -- there are two adjoining rooms -- perhaps for budget weddings with a little over a hundred guests.

In one corner, on a table sits a laptop with a couple of small speakers. There is constant music blaring from these speakers -- mostly Punjabi religious numbers.

Next to the laptop, on a larger table, aloo parathas and curd are kept ready.

Four of the young men volunteer to serve the food. Others will humbly accept the paratha in the palm of their hands and hold out a bowl made of dry leaves for the curd.

They have their breakfast sitting on the floor, sharing jokes, ribbing each other and discovering that someone is related to the other in some roundabout fashion.

As the day progresses, the contestants are no longer as quiet as they were.

They open up more easily and chat you up, wanting to know everything about your work and personal life.

Image: The aspirants line up during a rehearsal at the gurdwara complex
Photographs: Hitesh Harisinghani 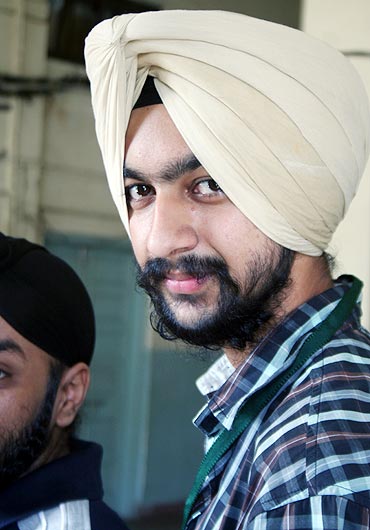 Most of them come from cities and towns in north India -- Jalandhar, Ludhiana, Ghaziabad and Mandi. A few come from New Delhi and a couple from Mumbai.

Sooner rather than later, you realise that beneath the tough exterior they like to project, almost all of them are just boys. Some of them are still studying and one, Rajangad Singh, will turn 19 in a day's time.

The lad holds out his visiting card -- he runs a centre in Chandigarh where they train you how to tie a turban!

Rajangad is also studying computer applications in a local college, but dreams of becoming a model someday.

"I want to show the world that it is possible to become a successful model with a Sabat Surat", he says.

Sabat Surat is one thing that is common to all these boys. None of them have unshorn hair. They don't shave or wax. It is one of the tenets of Sikhism and also a prerequisite to participate in the contest.

Says Rajangad, "A lot of boys assume they look good without their turbans. I want to prove them wrong."

"Our religious leaders have preferred to lay their lives down rather than cut their hair. I think youngsters like us (he pauses and looks around) should set a good example."

He runs a mobile store in Jalandhar ("My own, not my father's"), which he has left behind for a few days to satisfy his creative urges.

"I participated in this contest because I wanted to be recognised within the community. I am not sure if I can become a model. The idea was to spread the word about staying true to your religion," he says.

That is pretty much what everyone has to say. Gurvinder Singh, who runs an ad agency in Ludhiana, puts it differently. He's a rapper!

On request, he breaks into a Punjabi rap number he has written specially for the elimination round.

Mr Singh India 2010 encourages Sikh youth to hold onto their roots, stay grounded and not forget the sacrifices of their Gurus.

"You know, we are not here for the fame or the money," Gurvinder tells you after the round of applause has died out.

When he isn't rapping, Gurvinder shoots promotional videos for hotels and small businesses.

The huddle is broken as a diminutive figure walks in through the door. 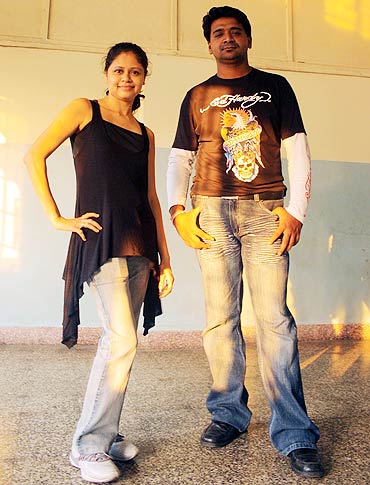 Shla Kesavan, a choreographer, has been hired to train the 20 finalists -- all of them raw and with little or no stage experience.

She settles down on a plastic chair at one end of the huge hall.

Soon, she is shouting instructions. Her voice overshadows the music as the hulks follow her obediently.

The show is divided into three sections -- in the first part, the boys will walk the ramp in vests, flex their muscles, draw swords and perform a ceremonial routine.

In the second part, they will walk the ramp in plain kurtas and pyjamas.

The final round will see them coming out in sherwanis.

Each round will require the contestants to enter in a particular manner, pose in a certain way and walk back.

Shla watches the young men walk with an amateurish awkwardness.

Then she tells them what they did wrong, that there is little time left and it's better if they buck up sooner rather than later.

This is all Shla does from 11 am each morning to 6 pm, during which the participants are made to go through the routine over and over, till they know it like the back of their hand.

Harpreet Singh Banga, one of the contest's organisers, walks in to supervise. He tells you the idea behind the event is to discourage young men from cutting off their hair.

While the trust does not have any tie-ups with modelling agencies nor promises any future in showbiz, the contest is apparently quite popular.

The final will be held at Mumbai's Shanmukhananda Hall on October 29.

Harpreet said the prize money for this year's contest has not been finalised yet.

"Someone from the community usually sponsors it and hasn't as yet confirmed the amount," he says.

Harpreet hastens to add, "It is not about money. We want to tell our youth that they need not forget their roots just to fit in." 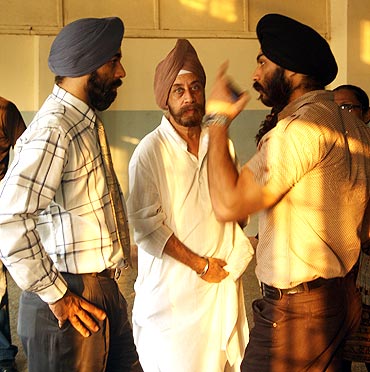