Sikh News No More - The True Daughter Of Waris Shan !

The true daughter of Waris Shah


The news of the passing away of the grand dame of Punjabi letters, Amrita Pritam, spread like forest fire through the literary circles in Chandigarh and Punjab as telephone calls started coming from Delhi minutes after her demise.


She rose like a meteor with her verses in Punjabi in Lahore in the Lahore of the 1930s and ‘Thandian Kirnan’ published by her in 1935, when she was just 14, brought her serious critical notice and there was no looking back after that. In a literary career spanning seven decades, she did Punjabi proud by bringing it the highest of national and international awards and honours. Not only was her contribution great in poetry and prose, she also provided a platform to young Punjabi writers in her magazine ‘Nagmani’, which she edited for 33 long years.

As writers recalled her and her times, the lines from her famous poem ‘Ajj akhan Waris Shah nu…’ was on many a lip. This poem made her the indisputable Punjab’s Partition poet on both sides of the border for she had summed so well the sorrow and loss that Partition had wrought on human lives.

Born in 1919 at Gujranwala in West Punjab in the rather orthodox Sikh society of the times, she showed rare courage in coming forth with what she believed in both her verses and life. This pretty and petite woman reigned over the world of letters and was a path-breaking writer in her language. It was she who brought to Punjabi the prestigious Jnanpith Award for the first time for her anthology of poems called ‘Kagaz te Canvas’ and the only other Punjabi writer who got the award after her, shared with Nirmal Verma, was novelist Gurdial Singh. When asked to comment on the award, she had replied in a line of her own verse — ‘Maan suche Ishq da hai, hunar da daava nahin…’ (I am proud of my pure dedication and I make no claims to artistry).

Among the other awards she received were the Sahitya Akademi Award, Cyril and Methodious Award from Bulgaria and the Ordre des Arts des Lettres from France. The Delhi Government declared her Poet of the Millennium at the turn of the Century. Interestingly, the same title was bestowed upon her by Punjabi Academy, Lahore. However, what made her most happy was when Illias Ghumman and other Punjabi writers of Pakistan sent her in recent years three ‘chaddars’ from the tombs of Waris Shah, Bulle Shah and Sultqan Bahu saying — "You are the true daughter of Waris Shah and thus the Waris of our Waris. Frail and weak as she was in her latter years, she got herself photographed with the green silk ‘chaddars’ edged with gold. Of her own poetry, her comment in all humility was: "I have just returned what I had absorbed from reading the poetry of the great Sufi and Bhakti poets of my land."

The story of Amrita’s life is one of amazing courage, resilience and achievement. What set her a class apart from others was her very romantic search for freedom and the desire to live life on her own terms. Walking out of a loveless marriage, she made her home with artist Imroz and the relationship lasted over four decades. It was Imroz who answered the telephone at their home as he was getting her ready for her last journey. He said in a choked voice, "She has not gone, only her body has perished. She will be there in her poems and my paintings."

In her lifetime, Amrita authored over 100 books of poetry, fiction, biography and essays. In one of her last poems written from the sick bed, she consoled her love Imroz by saying, ‘Main tainu phir milagi…’ (I will meet you yet again). This is the promise she made to her soul mate but she will yet meet us all again through her writings. For today on Divali eve she has passed out of history into legend to stand in the row of poets like Meera Bai, Rabia and Lal Ded.
Last edited: Nov 1, 2005 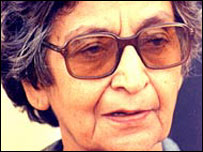 Pritam's works were translated into a number of languages

Renowned Indian writer Amrita Pritam has died at her home in the Indian capital Delhi after a long illness.
Known as the doyenne of Punjabi literature, 86-year-old Ms Pritam also wrote extensively in Hindi and Urdu.
Her first story collection, in the Punjabi language, was published when she was 16 years old.
She has received many awards, including India's highest literary award, Jnanpith, in 1981.
Feature film
Born to a Sikh family in Gujranwala, Pakistan, in 1919, Ms Pritam crossed to India after the partition of the sub-continent in 1947.
Moving to Delhi, she began writing in Hindi and also worked for the state-owned All India Radio till 1961. 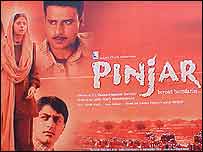 Pinjar (Skeleton) was made into a feature film in 2003


The first prominent woman Punjabi poet and fiction writer, many of Ms Pritam's writings dealt with the pain she felt at the division of the sub-continent.
One of her famous novels, Pinjar (Skeleton), was made into a feature film a few years ago,.
The story is set against the backdrop of the violent frenzy and rioting that engulfed the whole of Punjab in the months preceding partition.
"Her death symbolises the end of an era. Punjabi literature, after the country's independence, will be known as her era," said London-based Punjabi poet, Amarjit Chandan.
Ms Pritam's literary works have been translated in several languages including French, Japanese and Danish.
She has written several novels and short stories. She often wrote on the condition of Indian women and her writings reflected their neglect and suppression in Indian society.