No Divorce Clause In Anand Marriage Bill Sets Off Debate

SOURCE: http://sikhsangat.org/1699/no-divorce-clause-in-anand-marriage-bill-sets-off-debate/Amritsar, Punjab: The Anand Marriage Amendment Bill 2012 has been introduced in the Rajya Sabha. However, the absence of provision of divorce in the Bill has set off a debate in the Sikh community, with some sections supporting it and others against it.
While one school of thought maintains there is no place for divorce in the Sikh “rehat maryada” (code of conduct) and hence the Bill should not provide for it, the other feels that the separate marriage Act should be complete in all aspects so that Sikhs don’t have to fall back on the Hindu Marriage Act again at the time of divorce. 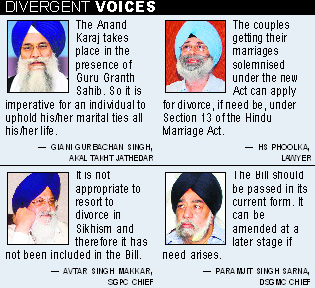 Talking to The Tribune, Akal Takht Jathedar Giani Gurbachan Singh said there is no mention of divorce in the Sikh “rehat maryada”. “Also the fact that the Anand Karaj takes place in the presence of Guru Granth Sahib makes it imperative for an individual to uphold his marital ties all his/her life.” The issue will be taken up in the next meeting of the Sikh clergy, he said.
SGPC president Avtar Singh Makkar said it is not appropriate to resort to divorce in Sikhism and therefore it has not been included in the Bill.
According to former GNDU Vice-Chancellor SP Singh, the Bill is a step forward towards a separate Sikh identity. “As divorce is not in consonance with religious sentiments of Sikhs, the Bill doesn’t talk about it,” he said.
But there are others who feel that the Act must have all provisions. “Without the provision of divorce, it will be an incomplete law,” opined former Head of Department of Guru Nanak Studies, GNDU, Prof Gursharanjeet Singh. “Divorce is a social need and it should be allowed under special circumstances. If a person is spoiling the life of his/her spouse, the latter cannot be left at the mercy of God for entire life,” he said. Noted lawyer HS Phoolka said the Bill is achieving the purpose for which it has been brought. “It will facilitate issuing of marriage certificates to Sikhs under a separate Act,” he said. On divorce, Phoolka said the couples getting their marriages solemnised under the new Act can apply for divorce, if need be, under Section 13 of the Hindu Marriage Act. To include the divorce clause in the existing Bill will require a lot of debate and discussion, he said.
DSGMC chief Paramjit Singh Sarna said the Bill should be passed in its current form, as it has come this far by clearing many hurdles. He said he agrees with the arguments of both the sides (who are for and against divorce provision), but the Act can be amended at a later stage if any problem arises.
Separate law

Former RS MP Tarlochan Singh, said: “When I first took up the issue in the form of a Private Member’s Bill in 2007, I had sent a copy of it to the SGPC and the then Akal Takht Jathedar Giani Joginder Singh Vedanti to seek their nod. At that time, Vedanti said he would approve the draft only if there was no clause for divorce, which he said was against ‘maryada.’ Therefore, I moved the Bill with only registration clause in it.” “We have been fighting for separate registration of Sikh marriages for over five decades now and this Bill promises to fulfill our long-pending demand,” he said.

If two people are married under Anand Karaj, and they have understood what they are committing to, understood the vows they have made, and understood in front of whom these vows have been made, namely the sangat and Guruji, then the arguments against divorce would hold some ground.

But lets face it, 99% of Anand Karaj is not understood by most people getting married, in fact the whole Anand Karaj ceremony is rushed and expedited so that the real celebrations can begin. To most couples Anand Karaj is a meaningless, boring, misunderstood and unwelcome part of the process.


For divorce not to be a part of Sikhism, we can begin by making the focus of the day the vows and promises the couple have made, the observation and meaning of the actual Anand Karaj, the happiness and love of the couple, rather than the hard truths, the dowry, the money, the ostentation, the boozing.

If you ever wish to see extremes of behaviour, go to a Sikh wedding, only there can you see an extremely religious person morph into an extreme party animal, all within a few hours.

I am beginning to wonder who the leadership actually represents............the real world or an idealistic one where we all pretend to be Gursikhs, but live exactly as we wish whilst paying lip service to noble concepts as far as the eye can see.
Last edited: Jun 13, 2012

Decisions ,sometimes, seemingly rational, have their genesis in irrationality. The Anand Karaj Bill is perfect example of this and also of disharmony and non-sync of clergy and the politicians. In circumstances like this, Clergy shall always win for very obvious reasons. Sikh clergy, in my opinion, is the leader even though it has only myopic view of entire ground reality; or rather, it prefers to give a deaf ear and blind eye to the same.

It is very well understood that Sikh Rehat Maryada [SRM] does not state clearly as to what is to be done when it rains. SRM does not deal with micro management of life. It leaves much to the common sense of people to manage their day to day affairs.

There is hardly a need of turning a blind eye to a problem when it is facing us as a stark and a naked reality. Divorce is a social need and is universally recognized by all human beings. Sikhs are also human beings and have all the weaknesses and strengths that any other mortal has. They are no exception.

In my opinion taking recourse to SRM to not to include the divorce clause is a baseless alibi. To make the Act complete there should have been divorce clause .It could have been possible if clergy understands its proper Role and responsibility. Present Bill should be called as ‘Sikh Marriage Registration Act’ instead of misnomer - Anand Karaj Bill/Act.

Jathedari is a responsible position and those enjoying this prerogative should also appreciate this. I do agree with Harry ji that it is not clear to Sikhs as to who is the real leader, whether Politicians or the Jathedaar/clergy. It is regretted that it also shows that Sikhs are a divided lot. We have not learnt from the past. It is painful to be reminded of that in India we are constitutionally Hindus.