I have heard various interpretations of the iconography of the Nishan Sahib.

The 2 talwars (curved swords) represent Miri and Piri, temporal and spiritual authorities of the Khalsa panth respectively. The khanda (straight sword) in the center represents the One, referred to as Sri Bhagauti (the great sword) in our daily ardas. The circular chakra around the straight sword signifies that the One is akaal (timeless). It is without beginning or end.

The current symbol on Nishan Sahib, referred to as "Khanda", evolved over time.

An earlier depiction shows a symbol of a shield and sword
http://www.sikhmuseum.com/nishan/khalsa/index.html#khalsaera9

A similar shield and sword is seen in this writing of the mool mantar. It is kept at Takht Harimandir Sahib in Patna. The shield and sword appear above the Ekankar and Oankar respectively, perhaps as a means to signify two different aspects of the Divine.
http://www.sikhmuseum.com/nishan/khalsa/index.html#khalsaera8

What is your interpretation of the current Nishan Sahib symbol, and the various Nishan Sahibs of the past (particularly of the shield and sword depicted in the image)?

Our Ardas invokes the path of Sri Bhagauti, as brought by Guru Nanak. How does the imagery of a sword relate with Hukam and the negation of Haumai?

Are there any clues in gurbani that hint toward the path of the sword being a mindset?

I would love to hear from the Sangat.

Thanks for all this information, Ji. To be honest I hadn't put this much thought into the Khanda \ Nishan Sahib symbol.

Do you have any ideas if there is a symbolic meaning behind the shield icon on those historic images you posted?

By having the shield and sword above Ik Onkar, it makes a creator-preserver-destroyer trinity.

To be honest, I didn't think much of the sword and shield imagery on earlier depictions of the Nishan Sahib, until I came across that picture of the mool mantar. It made me think that there must be more to it.

The shield and sword imagery could possibly symbolize the sustainer, destroyer aspect of the Divine, as you have stated. My guess is as good as yours. There doesn't seem to be much written on the subject, although I have a strong suspicion it is communicating something regarding Ekankar Oankar.
Last edited: Dec 12, 2015

What I find really interesting is that we have references to Sri Bhagauti (the Sword), but what about the shield? I will be doing some searching!

Is the chakra in the Nishan Sahib really a chakra, or is it a shield? Hmm...

It is a chakra, as seen in this depiction of the Khanda symbol: 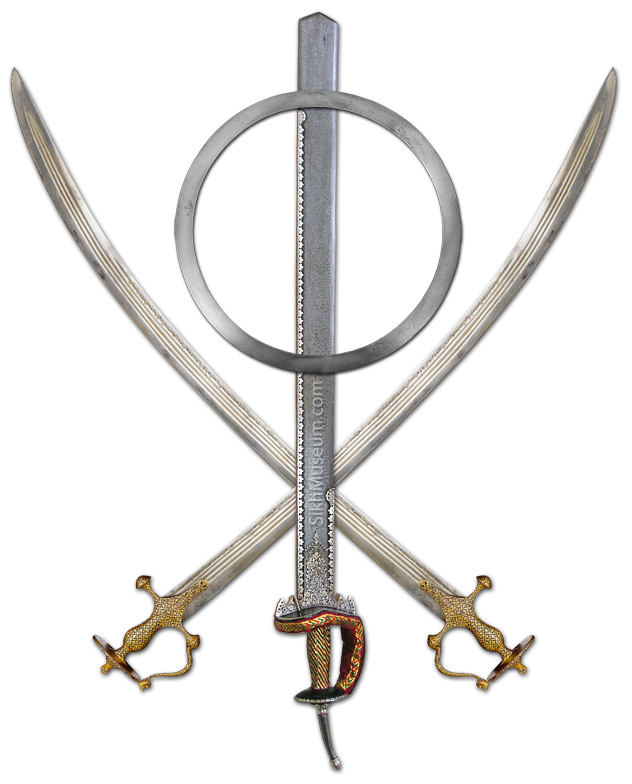 I'll get back to you on the shield references in gurbani.

This shabad gives another appreciation of the khanda \ Nishan Sahib.

The Guru implies Nanak's Guru, i.e. The One (Ek).
"Word of the Shabad" is used to translate ਸਬਦ (Shabad).

Shabad is a spoken word or sound, taken from the Sanskrit word Sabda.

So the Guru (Ek) uttered a word / sound that we have come to call Shabad or Shabad Guru.

I am starting to lean in the direction of Dhun (vibration) and Anhaad Naad (unstruck sound), something along the lines of what Harkiran ji discussed before.

Unstruck = Self Emanating. Two objects usually have to strike each other to create sound. But if there is only One (Ek), we would say that the sound is self-emanating (Anhaad Naad). It comes from itself.

Guru Nanak talks about the Shabad Guru in Sidh Gosht. It reveals something to us if we attune our minds to it.

Going back to the quoted tukk, what can the "word of the Guru's Shabad" shield and shelter us from? Perhaps this will provide more meaning to the iconography in question.

I heard a long time ago that the khanda symbol as we know it today was generated as a military insignia for Sikh regimens during British rule in India. I'm not sure how true that is, however the Nishan Sahib website does say:


A number of emblems used by Sikh military units of the British Army or private armies of the remaining Sikh Kingdoms may have been pre-cursors of the modern khanda emblem.
...
Similarly it becomes difficult to determine if the design of these military emblems had a direct influence on the development of Sikh religious emblems at the time leading, or whether these military emblem designs were influenced by pre-existing religious emblems used by Sikhs during this period. It is uncertain which came first, but a definite correlation between the design of the Sikh military emblems and other khanda like emblems does exist.​
http://www.sikhmuseum.com/nishan/19thcentury/military.html

For a long time I've been resistant to the modern khanda symbol because I thought it was simply a British invention foisted upon Sikhs. Also, the khanda these days seems to be more a symbol of Punjabiyat than Sikhi.

I am relieved to know there is much more history to it.

Aww shucks...I suppose you are right. The modern Khanda design does seem influenced by the Sikh military insignia of the British Raj. It's kind of a letdown. I was hoping there would be more to it. It still leaves the question of why the British chose this particular design for the Sikh military insignia. Did it have anything to do with their study of Sikh culture? Perhaps one can only speculate.

If in the future, someone asks me what the Khanda symbol represents, I might be so inclined to stick with my explanation in OP. Symbols sometimes take on new meaning over time, case in point the Swastika (the only example I can think of at the moment). If anything it will provide us with an opportunity to explain a bit of Sikh philosophy if the situation should so arise. Tis better to give it new meaning, than leave it as a remnant of British colonization.

The pre-British Khalsa-era insignia is still open for interpretation, if anyone is so inclined to take a jab.
Last edited: Dec 16, 2015

Certainly the British did well with their suggestion. Surely they can't have come up with it themselves as the symbolism is too deep. Perhaps they were advised by Sikhs at the time, who undoubtedly found inspiration in the older era insignia.

The sword (kirpan and khanda) and the chakra were around way before the British.

There is no historical evidence anywhere during pre British era to be found about the origin of today's motif on Nishaan Sahib- Khanda with Chakra. In fact, no one really knows what it truly signifies as per Gurmat.

I would personally prefer to replace the motif with ੴ, the only Sikh Symbol with the universal message. In fact we were able to change the motif of modern day khanda with ੴ on our Interfaith forums brochure.

The same thing was done for the Avatar here on SPN.

Perhaps the circle of the in the nishan sahib symbol is actually the rim of the iron bowl containing the initial preparation for khande di pahul?

There are many stories about it. If it were a true Sikh insignia, then we would all know its meaning. As a result, people start concocting and embellishing the stories at will which is not the Sikhi way in my opinion.

This is just one more proof how many Sikhs have become blind sheep which makes them get into mechanical rituals as a fear factor.

I wish they understood that Guru Nanak took off our blindfolds of meaningless ritualism so that we can become better human beings in order to fight for justice and equality for all, irrespective of their hue,creed,faith or no faith.

I remember reading somewhere, though I cannot recall the source, that the origins of the current nishan can be traced to a white flag containing the Ek Oankar symbol. This standard was hoisted high to mark the site of the Guru’s langar, so that all may see and come to have a free meal. The current Nishan Sahib is still flown only outside those gurdwaras where langar is served.

An iron bowl isn’t outside the scope of consideration. I flirted with the idea of "Degh Tegh Fateh”, which was the Khalsa slogan under Banda Singh Bahadur. It translates to “Victory of the Kettle and the Sword”, which was a pledge towards the Khalsa’s commitment to feed the hungry and protect the weak. Although I am fairly certain that the circle in the image isn’t a kettle or a bowl, but rather a chakra. It fits better with the weaponry imagery of the 3 swords.

Memoir of the War in India, William Thorn, 1806
Besides the matchlock, spear, the scimitar, which are all excellent in their kinds, some of the Seiks are armed with a very singular weapon, which they use with great and destructive effect against cavalry. It consists of a hollow circle, made of finely tempered steel, with an exceedingly sharp edge, about a foot in diameter, and and inch in breadth on the inner side. This instrument the horseman poises on his fore-finger, and after giving it two or three swift motions, to accelerate its velocity, sends it from him to the distance of some hundreds of yards, the ring cutting and maiming, most dreadfully, every living object that may chance to be in its way. [1 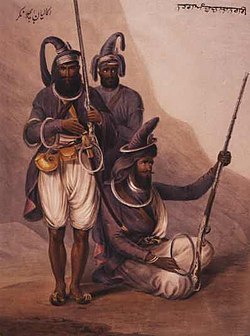 The true meaning is out there somewhere, its just that no one has bothered to investigate. Unfortunately I don't have the time or the resources to undertake the endeavor myself. There is still much of our history to be uncovered. We shouldn't fear what we don't understand at first glance. There does seem to be a palpable British influence in the current Khanda design, as Ishna ji has pointed out with her correlation to colonial Sikh military badges. Even the religious imagery from the turn of the 20th century shows a rudimentary Khanda design starting to evolve.

Compare the imagery here with a European-styled coat of arms below. The British influence is palpable. 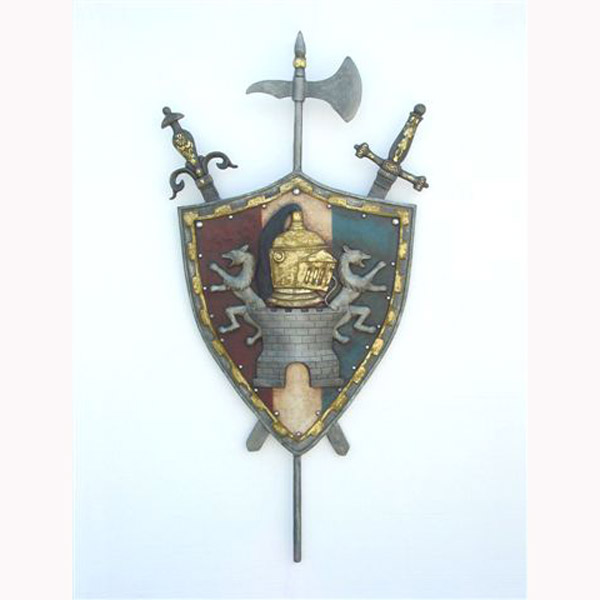 The Invention of Tradition by Eric Hobsbawm and Terence Ranger. The book discusses the British practice of issuing the conquered Indian princely states a coat of arms based on their culture and history, as a part of the process of assimilating them into the British Empire.