Nihangs: Three Centuries Of Knighthood In The Service Of Sikh Faith

SPNer
With their touchy pride of warriors from another time, Nihangs Singhs are the last survivors of a secular tradition being threatened but India modernization. Single combats, perilous horse races, ritual beheading of goats: before the possible disappearance of its genuineness, we attended their big Hola Mohalla annual pilgrimage in Anandpur Sahib, in the Northwest of the country.


The white marble temple, crenulated and ornamented with domes, looked down upon the town with grandeur. Thousands of tents blew in the surrounding plain. Carried by the powerful stream of pilgrims, we went down the street. Agglutinated stalls re-echoed the penetrating looks of richly dressed bearded men paintings.


In a cacophony of religious hymns and harangues that were yelled by powerful loud-speakers, we came through a high stone porch. Was someone shooting a spectacular movie, with hundreds of walker-ons? Dress and properties looked in any case perfect. These hearty vigorous men, with an exuberant beard and moustache, sported splendid metal-bound turbans that all vied in height and ravishment.


Nothing was missed by these valorous soldiers of 17th century India, sporting a sword and a dagger at the belt. Spears, heavy metal-inlaid sticks, bows and arrows added to the atmosphere of a battle-eve. Even horses were period with their scarves, pompoms and small bells.


" Sat Sri Akal! " (" Immortal God is Truth! ") The shout flashed around the tent that was converted into a temple which immediate surroundings could only be walked-on barefoot. Suddenly, two male goats were brought, their hair glazing. A circle was formed. Incense fumes. A warrior get it still, as if hypnotizing it, and, in a sharp sabre blow, sectioned its head! But... but were the cameras?


This was actually the most incredible thing: it was not a movie shooting! Welcome to the camp of the main group of Nihangs Singhs, this order of Knights that was founded in 1699 to fight the Moghol invaders. Of course, we had decided this trip to Anandpur Saheeb for them. We had been talked about strange proud men. But how could we have imagined such soldiers coming from another time? How would we have expected to find this blue tunic and the very same arms of their creator, tenth and last Sikh guru Gobind Singh?


Two centuries before, this monotheist religion had been born as a syncretism between Hinduism and Islam. Its orthodox followers are easily recognizable: cutting absolutely no hair, they wear a dagger, a copper wrist ring, a comb and trousers that are tightened before the knee. They are " lions " as their name Singh shows it. And Nihangs add to that, thanks to Persian origins of their naming, the fierceness of " crocodiles ".


Our travel through the camp brought one surprise after another. In the bitter wreath of smoke erupting from the oven that had been dug in the earth, with their turbans letting only their eyes appearing, men were busy cooking the meals that were later served as an offertory to the pilgrims. Besides, in the rhythm of heavy wooden punners, faithfuls were relaying in a ceaseless ballet to get their bowl filled up with a precious milky potion having a taste of sweetened almonds. Sikhs generally condemn any consumption of exciting substances but, here again, Nihangs didn't care. Tradition made this communion compulsory. For " bhang ", which is made primarily from cannabis, is said to give them strength and concentration. And the true spirited Nihang being one with his mount, even horses were gratified with this nectar on that Hola day.


Very near from this weird altar, a not less surrealist ceremony of allegiance was taking place. A ritual stop in the pilgrimage, an old wise man was receiving the respects of the faithfuls. Approaching one after the other, they were markedly bowing, touching his leg and letting a bank note. The palanquin, on which the white-beard jathedar was confortably laying among pillows, was quickly covered with money. The venerated " baba " counted it with care, giving not attention to the concert of praises. The blessing generally went over with the distribution of some sweets and grains of cardamom. But, sometimes, a brief conversation took place, in a secret murmur, from mouth to ear. And the pilgrim got away, his face lightened by happiness.


Just besides the temple-tent, this ceremony had a much more sophisticated organization. At the entrance of a small brick house, tradition and modernity were just clashing. For tumultuous warriors were joined by Punjabi policemen, who were totally anachronistic with their submachine guns.


This Jathedar, Baba Santa Singh, has been heading for more than three decades the Buddha Dal, the Veterans group which is the most important among the dozen Nihang movements. If is entitled to such guard, its is also because he is much discussed among Sikhs. For he is accused of having " betrayed " the cause, by accepting money from the Indian government to reconstruct Amritsar Golden Temple. The assault against it, to dislodge the separatists, in 1984, led to the killing of Indira Gandhi by two of her sikh bodyguards. Recently, the uprising -that claimed more than 20,000 lives- got relatively calmed down but terrorist attacks still punctuate the life of Punjab, where Sikhs -about 2% of the total Indian population- are a majority.


Abruptly, a craziness wind blew on these rough and sometimes brusque men. Borrowing to the Hindu tradition of Holi, that had been marked the day before, the fought with... coloured powders! The festival was then living his most fun hour, with laughs echoing and beards getting red.


But it was time: the big parade had to begin, due to pay a tribute to the main sacred places of the second holiest Sikh city. Again, the show was incredible! The 2,000 Nihangs, 200 of which on horses, moved off in a procession of several groups -each one behind his chief. Proudly riding his splendid white horse, one of these Jathedar even had the privilege of having an aide refreshing him with a big fan. In front of him, the most trained soldiers vied in skill: sticks clashed, sabres and clubs with chains turned round and round in the air. " Sat Sri Akal! "


Walking on air, the million and a half of pilgrims that were massed in a guard of honor on both sides of the roads were repeating all together the slogan.
The day went off with its grand finale in a large field, where riders multiplied valors, pinning wheat bunches while at a gallop or riding, standing, two horses at the same time! A curtain of dust enveloped them.


The festival was getting to and end and, in the soft orange sunset, the first pilgrims were leaving Anandpur Saheeb. This small town of about 5,000 inhabitants was soon to live again peacefully. Alcohol and tobacco, that had been forbidden during six days as they are strictly prohibited by Sikhism, were about to reappear in the full light.


The morning after, we attended a very moving ceremony in front of the temple-tent: a few mature men and women were induced into the Buddha Dal. " Waheguru Ji Ka Khalsa; Waheguru Ji Ki Fateh " (" The Pure Ones belong to God; Victory to God "), they repeated while receiving amrit, the sweet water of baptism. A bit further, the last ones were getting renewed their special permits to carry arms.


Forget about trying to find how many Nihangs there are. Depending on the chief you talk to, the figures range from 20,000 to 600,000! But something is sure: this community is changing. It wouldn't have been in the time of Guru Gobind Singh that we could have seen a Nihang checking the arterial pressure of an old man in a field, between carts and horses!


Even the horse, the supreme symbol of independence, is beginning to be replaced. When leaving, among the overcrowded trucks, carts and buses, we overtook of course riders. But also Nihangs riding a bicycle or driving a four-drive-wheel...


Will modernity eventually kill these Nihangs Singhs? " No! It is impossible that the tradition disappear! There will always be combats to fight ", told us with a lot of conviction Baba Nihal Singh, jathedar of the Tarna Dal, the Youth Group. " Our way of life will last. "


Nevertheless, Nihangs are more and more numerous to get married and to settle. The first Western tourists are coming to the Hola Mohalla. Will it be soon necessary to shoot a movie with true walkers-on to remind the tradition of these braves among the pures?

SPNer
Supporter
This is one of them. The photographer is Nick Flemming.

SPNer
Antonia, those pics were awesome!

SPNer
I really like the way the Nihangs live. I remember this, taht during the 300 saal Guru de nal tv footage, one of the young sikh man would appear from his father or an old Nihang man, i really wished I was him. I want to live that like rather than the one so called modernised one. i would rather be happy, being more close to my Guru.

SPNer
of all whom i have known ..i have utmost respect for Nihang Singhs..they r sweet.. innocent ...full of knowledge....have so many stories untold in the pages of history ... they are like noble lions ...i have interacted with Budha Dal and Tarna Dal Nihangs....

Hola Mohalla the war festival of the Nihangs is celebrated during the month of March, marking the festivities congregations of Sikh devotees converge from all over India and abroad.The festival is based on the historic mock battles devised by the Tenth Guru of the Sikhs, Guru Gobind Singh. Punjab Heritage News (and Sat Sundri kaur Khalsa) present pictures from the festival.

Nihang, or Sikh warrior, Major Singh, left, wears a 425-metre long turban as he talks to a young Nihang during celebrations of "Hola Mohalla" at Anandpur Sahib in the northern Indian state of Punjab on March 11, 2009.​

A Sikh cleans a huge pan during celebrations of "Hola Mohalla" at Anandpur Sahib in the northern Indian state of Punjab on March 11, 2009.​

Nihangs, or Sikh warriors, apply coloured powder to each other during celebrations of "Hola Mohalla" at Anandpur Sahib in the northern Indian state of Punjab on March 11, 2009.​ 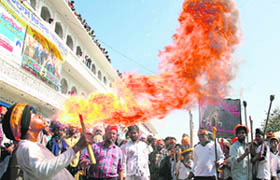 A Young Sikh breathes fire at the Holla Mohalla festival.​ 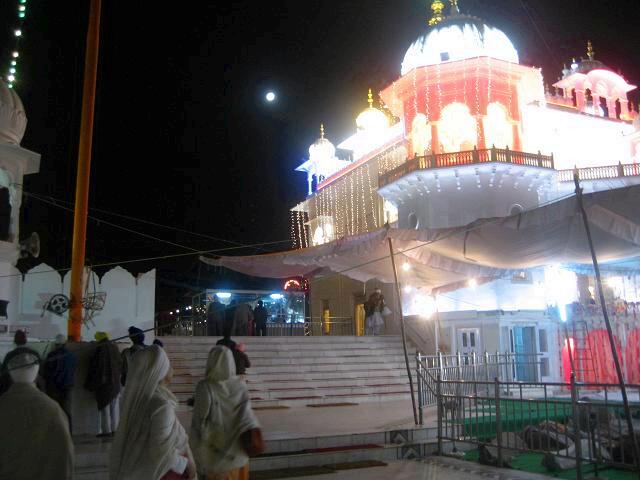 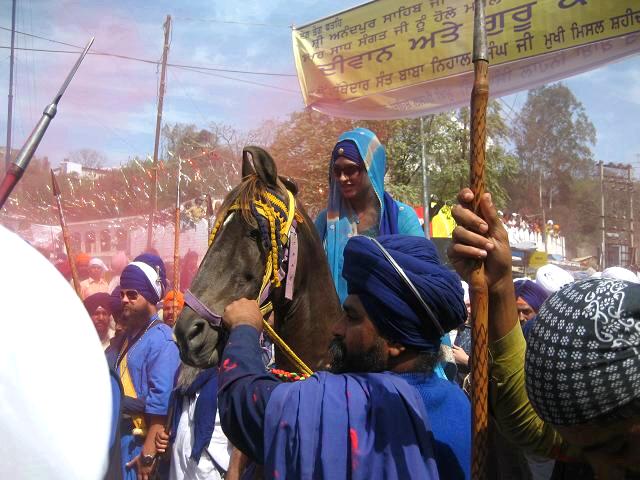 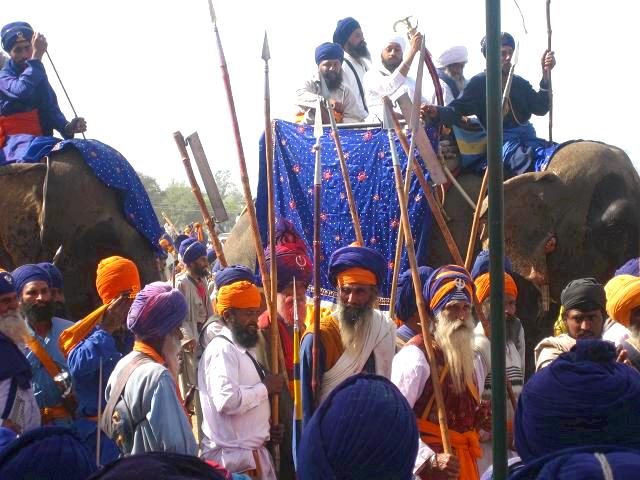