Learn Punjabi My Gurmukhi Khajana: A Gurmat Based Primer 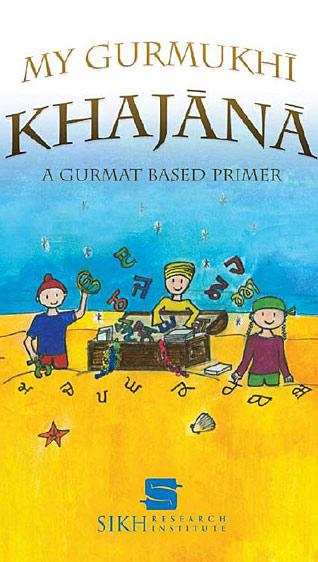 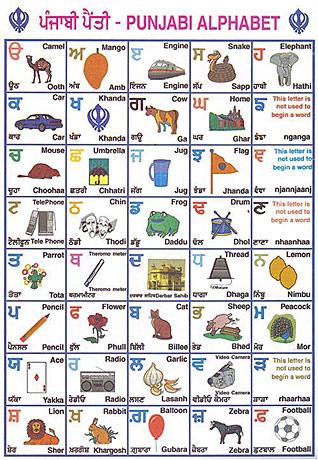 This is a lovely children's book, meant to introduce youngsters to the letters of the Gurmukhi alphabet through the use of Gurmat-based vocabulary. Words used in this kaida (Gurmukhi alphabet primer) were chosen from the Guru Granth Sahib, as well as several other Gurmat sources. According to the book's creators, this was deemed an important way of familiarizing children with terminology from the Sikh sacred scriptures.

The illustrations depicting each word are beautifully rendered in an appealingly child-like fashion. Not surprisingly, they strongly emphasize Sikh principles and traditional lifestyle. All the people are shown as Sikhs who are observant of the full discipline of the faith, with suitable head-coverings and dress, beards where appropriate, etc. In keeping with the gender equality inherent to Sikhi, many gender-inclusive touches were included. For example, a woman is among the three soldiers in "army", the police officer in "stick" is a female, and the "warrior" is a Mai Bhago look-alike.

Words not depicted through the use of human beings are also shown in a uniquely Sikh way. For example, "enemy" is represented by the Panj Doot, while "duty" enumerates Nitnem, Seva , and helping others. Ideas embodying more abstract qualities, such as "emotional pain", and concepts of a strictly Sikh nature, such as "Name" (i.e., Naam) and "Vaheguru" are graced with especially sensitive illustrations.

A page of suggested activities is placed in a prominent place, right before the start of the main section of the book. This is an imaginative and comprehensive list of instructions, which adults will find easy to comply with; children will surely enjoy the results!

Regarding matters of a more technical nature, the explanation on the "colophon" page about transliteration and the "Sikhri" font may, in some cases, assume too much background in linguistics on the part of the adult facilitators. (It will certainly be unintelligible to the young children, themselves.) Furthermore, its physical placement, in small-sized type on the bottom of a left-hand page, may unfortunately result in this important explanation being entirely overlooked.

Similar difficulties might be encountered with the Appendix. The effort on the part of the book's creators to locate each word as used in Guru Granth Sahib was a highly laudatory one. However, as with the previously-mentioned segment, this section may not get the adult usage it deserves.

While the considerable motivation it assumes on the part of the adults may indeed be present, this may not be the case with the Gurmukhi reading ability and access to Guru Granth Sahib also required.

These caveats aside, My Gurmukhi Khajana remains an undoubtedly valuable book, especially when used, as its creators intended, as a supplemental resource with the Sohji elementary school curriculum.

[Sojhi - Gurmat and Panjabi Education Resource, is a project of the San Antonio, Texas-based Sikh Research Institute. Its goal is to "improve the effectiveness of Sikh education by developing high standards of learning with comprehensive teaching materials". This book can be obtained at: sojhi@sikhri.org ]