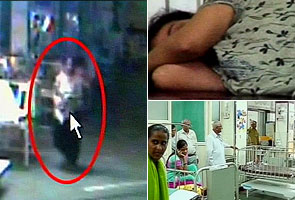 Mumbai: The paediatric ward of KEM Hospital in Parel, Mumbai became the scene of a horrific crime when 26-year-old Deepika Parmar tried to get rid of her infant daughter by throwing her out of the window of a toilet and then claiming that she had been stolen.

Deepika had given birth to seriously underweight twins - a girl and a boy - about a month and a half ago. The premature twins were brought to the hospital from Dahisar, where they were delivered in a nursing home. The deceased girl's twin brother needs to be nursed.

"Some time back, she was crying," said a policeman. A police complaint has been lodged against Parmar, but she has not been arrested.

"Around 4.40 am yesterday, as patients and relatives in the ward were still asleep, Parmar slipped into the bathroom with her baby girl bundled in arms," said security official Sanjay Tiwari who monitors the closed circuit television camera (CCTV) at the hospital.

"She is seen leaving the bathroom without the infant. Then, she briefly stepped out of the ward to see her husband."

Once back to the ward, Parmar raised an alarm that her daughter was missing, sending the hospital authorities on a wild goose chase. Parmar's act came to light when security attendants rewound the CCTV footage to track down the baby's whereabouts.

"The footage showed Parmar going to the bathroom, carrying something in a white cloth neatly but walked out with her hands swinging," said Tiwari. "That's when we suspected something amiss. When we questioned her, she said she had gone there to wash clothes."

However, when she was told to show the washed clothes, she hesitated, then fumbled before admitting that she had thrown the baby out of the vent.

Hospital sources said the baby had landed into a pool of sewage water outside. The impact of the fall was lessened and the baby did not die on the spot as it fell on used mattresses floating in the water.

"Unfortunately, the right side of its head was injured and bleeding profusely. By the time the security personnel rescued the infant, a rodent had nibbled its ear and this could have proved traumatic for the baby," said a medical staffer.

Her husband Manish, who is a tailor, said, "We were more than happy with our twin babies, especially after two miscarriages she had earlier. I don't know why she did this."

"We did our best to save the baby but she had turned cold and we could not operate on her," said dean of KEM Hospital, Dr Sanjay Oak.

"We have not arrested Parmar because she is supposed to nurse the boy," said Inspector Vikrant Patil of Bhoiwada police station. "The intention of abandoning is yet to be established."

The hospital authorities, who fear that Parmar could try to do the same thing to the other infant, have instructed her relatives and the hospital's security personnel to keep an eye on her.

"The mother, who seems to be unstable, needs immediate psychiatric help. One cannot predict what she will do next, and that puts the baby boy at risk. It's possible she has schizophrenia," said psychiatrist Fabian Almeida. "While the mother needs attention, the child needs protection."

I'm guessing they're not keen to consider post-natal depression in that particular hospital. It is not uncommon for mothers to have thoughts about killing their children, and some do act on it. Poor mother, poor baby. I hope the mother gets the help she needs because it must be hell to be in her mind at the moment.

Ishna said:
I'm guessing they're not keen to consider post-natal depression in that particular hospital. It is not uncommon for mothers to have thoughts about killing their children, and some do act on it. Poor mother, poor baby. I hope the mother gets the help she needs because it must be hell to be in her mind at the moment.

Well over India this story is being highlighted on television.The views were that She did it quite cleverly,she just threw the girl and raised the false alarm
It was because of CC tv footage she has been caught O/W no one would have ever known that she did it.So that is why case of murder is lodged against her not post natal depression.

I agree, it's still murder, but so is smothering your baby with a pillow and blaming it on cot death.