Missionaries in Punjab – A Growing Concern

This is Part 1 in a series of articles that will address the growth of Christian Missionaries in Punjab. 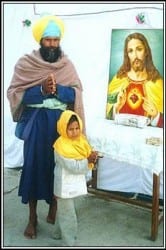 “Just as we do not see any Buddhists in the country except in images, in the same fashion the Sikhs, who are now, here and there, visible in turbans and their other religious forms like wrist bangles and swords, will be seen only in pictures in museums. Their own sons and grandsons turning Christians and clad in coats and trousers and sporting toadstool-like caps will go to see them in the museums and say in their pidgin Punjabi: Look, that is the picture of a Sikh – the tribe that inhabited this country once upon a time.”
Giani Ditt Singh,
Khalsa Akhbar (Punjabi) of Lahore, May 25, 1894

Christian missionary activity is increasing rapidly as the social and family fabric in Punjab continues to deteriorate. As Gurdwaras and other Sikh centres have not been keeping pace with the evolving needs of Sikh youth, Christian missionaries have filled the void by capitalizing on the spiritual and physical needs of Punjabis.

According to some sources, up to 74% of Punjab’s youth are now addicted to drugs. The New York Times described the problem of drug usage in the following exceprt: “Throughout the border state of Punjab, whether in villages or cities, drugs have become a scourge. Opium is prevalent, refined as heroin or other illegal substances. Schoolboys sometimes eat small black ***** of opium paste, with tea, before classes. Synthetic drugs are popular among those too poor to afford heroin.” Yet, instead of addressing the growing epidemic of drug usage and the public health threats such as HIV that are exacerbated by drug consumption, the Punjab Government and its Sikh leaders have not taken substantial steps to address the issue.

Following the Government’s revenue streams leads us to over 8,000 government owned liquor stores that bring in steady revenue for the state. It is appalling to think that a government that faces nearly ¾ of its youth suffering from drug addiction has only a handful of drug deaddiction centers but has 8,000 government owned liquor stores. This complete disregard for the future of Punjab’s youth and the entire state’s economic and social vitality has left private institutions to fill the void left by the government. The lack of government action presents itself as the perfect opportunity for Sikh leadership to take the lead in addressing the drug epidemic by creating outreach and deaddiction programs. Yet, the limited action, if any, that has been taken by Sikh bodies like the SGPC have not been commensurate with the size of the epidemic. This has left many youth, both Sikh and non-Sikh, looking for other avenues of help. Looking at the hospitals and churches in Punjab -it is no surprise that Christian missionaries have been able to make inroads with Punjabi youth. The Christian missionaries are doing their part to fill a huge void left by the shortsightedness of Sikh leaders.

Punjab is in the middle of the pack in literacy rates. (Illiteracy is highest in border areas, the areas most impacted by drug trade and usage). Yet, Punjab is not fully equipped to meet the challenges of the 21st century, specifically creating a holistic education system.

Those growing up in countries like the United States, Canada, and the UK are familiar with school programs such as DARE. To our knowledge, there are no programs funded by the Punjab government that take aim at combating drug usage starting in primary school. The lack of awareness about the consequences of drug use needs to be addressed at an early age before the drugs are actually accessible.

Punjab has struggled to adapt to the changing social problems that face its citizens. Government and Sikh institutions have not found a way to effectively increase awareness around drug and alcohol use, HIV prevalence, female infanticide and a host of other issues. The lack of education around these severe social problems represents a latent need in Punjab, a need that must be filled systemically.

The agricultural sector in Punjab, the driving force behind the Punjabi economy is undergoing major challenges. Yields are dropping; In 2000-2001, 45 quintals of wheat were produced per hectare. In 2005-2006, this was down to 40 quintals per hectare. Crushing debt has caused 200,000 farmers to leave their farms and has also caused an epidemic of farmer suicides. The fact that farmers are leaving their farms is not alarming by itself but the lack of a plan to transition them to other sectors of the economy is problematic.

Industry in Punjab is also in trouble. Tehelka magazine reports that there were 127 textile processing units in Amritsar in 1990. There are now only 20. Industry in the rest of Punjab is also shifting out. Amarjit Singh, President of the Corduroy Manufacturers Association of India told Teheka that, “First, Uttarakhand and Himachal Pradesh have a tax holiday and several subsidies. Punjab is like dry roti. They are like bread and butter. I don’t need a passport to cross over. Those who can, have gone.”

Observers note that the Shiromoni Gurdwara Parbandhak Committee (SGPC) and other Sikh institutions have been derelict in their duty to modernize the parchaar or propogation of the Sikh religion to the current generation. Alcohol and drug abuse have continued to rise opening the door to Christian missionary work along with increased membership in anti-Sikh cults and other religious groups.

Sikh youth groups in the west have come up with innovative strategies to engage youth who are hungry for spiritual growth. Overnight youth camps have become commonplace in Canada, the United States and England. Weekly discussions on social or youth issues and their relationship to Sikh principles are regular occurrences. Gurdwara-based camps could be mandated by the SGPC to instill Sikh principles and a knowledge of Sikh history in children. Christian missionaries exploit the lack of knowledge that Sikh youth have of their religion to promote their goals. For example, very few Sikh youth still hold a basic understanding of Sikh history, including the names of the 10 Gurus. Instilling a comprehension of Sikh theology is even more challenging when most youth are completely ignorant of their history including the sacrifices of millions of Sikhs for their religion.

Christian missionaries pose theological questions to unsuspecting Punjabis, taking advantage of their ignorance of their religion. By helping them financially and otherwise, many Punjabis see an incentive to convert and with Sikh institutions asleep at the switch, conversion rates are growing dramatically. The lack of a proactive Sikh-based response has contrasted poorly with Christian missionary work that is proactive and attuned to the needs of the average person.

To their credit, Christian organizations have taken initiative in addressing the void that has been left by Punjabis. Their willingness to address these issues head on has led to increased influence and as a result more converts, even in cities like Amritsar. As Sikhs we need to address the flight to Christianity by addressing the root cause of why people are leaving the religion – because Christian missionaries are more effectively meeting the needs of the people. We urge the Sikh community to step forward, and take the same initiative that the Gurus encouraged and take efforts to create infrastructures that will not only help Punjab but will let the light and vision of Guru Nanak be apparent to all.