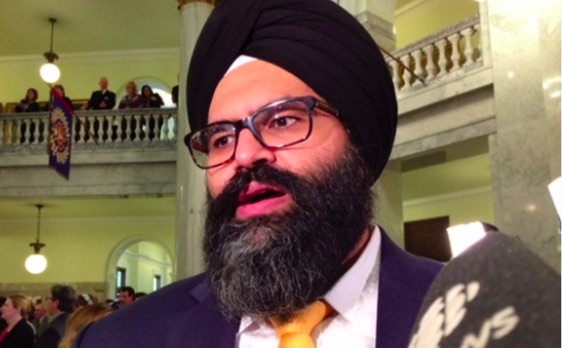 Related Stories
Friends, colleagues and citizens are mourning the loss of popular Calgary MLA Manmeet Bhullar, who was killed in a car accident on Monday.

Calgary Mayor Naheed Nenshi released a statement saying "I am utterly gutted to hear of the sudden passing of Manmeet Singh Bhullar. A public servant, a true warrior for fairness and justice, a big man with a giant heart, a friend.

Manmeet's accomplishments are well-known. He was a powerful community advocate from a young age and first elected to the Alberta legislature at 28. He was brave and unrelenting in his role, particularly when it came to forcefully advocating for children in care – the least powerful people in our society."

"It's literally devastation. I think the community is in shock. He had done the community so proud and he was somebody who was so passionate about helping everyone, no matter who they were and where they were from," he said.

Bhullar was a rarity in today's day in age in the amount of respect he commanded from all sides of the aisle, with critics and colleagues praising his good nature and hard work.

Our thoughts are with the family of MLA Manmeet Bhullar and the @PC_Alberta caucus in this time of sudden grief. #ableg #RIP

— @AlbertaParty
We are incredibly saddened by the death of the Hon. Manmeet Bhullar. Our heartfelt condolences go out to his loved ones. #ableg #abpoli

— @UCalgaryNDP
Ward 10 councillor Andre Chabot called Bhullar a "brother from another mother" and says he's having a hard time wrapping his head around today's news.

"He was such a good friend and we worked so well together, he was like my brother — my little brother, mind you — we kidded around about each other, we fed off each other, he was just a tremendous inspiration for such a young man to me."

"He was larger than life and he was so friendly, so giving, so willing to do whatever it took to please everyone. But he didn't pull punches."

For Nenshi, who grew up in the northeast like Bhullar, he'll miss their get togethers.

"I always looked forward to our long lunches over vegetarian Hakka Indian food and chai in our neighbourhood, talking politics and community and religion and pluralism and life. He was one of the finest men I have ever met in politics, or anywhere."

The member for Calgary-Greenway was first elected to the Alberta Legislature in March 2008.

"A lot of people who are interested in the machinery of government and politics you know, aren't always there simply because they want and desire a better community — and he always did. And that's what made him so good at what he did," Nenshi told the Calgary Eyeopener on Tuesday morning.