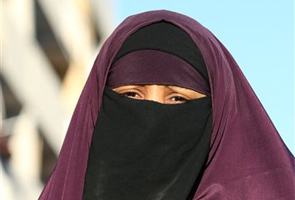 London: A Muslim man in France has been jailed after he punched a nurse who tried to remove his wife's veil during childbirth.

Nassim Mimoune, 24, had already been expelled from the delivery room for branding the midwife a 'rapist' as she carried out an intimate examination of his wife, the Daily Mail reported.

But just as he spotted the nurse, through a window, taking off his wife's burqa while the woman prepared to give birth, the man smashed open the locked door. He hit the woman in the face, demanding she replace the full Islamic veil.

After his wife gave birth to a baby boy, Mimoune was ejected from the hospital building by security guards in M{censored}ille. He was later arrested for assault.

A judge in the southern French port jailed Mimoune for six months while saying: "Your religious values are not superior to the laws of the republic."

A judge in the southern French port jailed Mimoune for six months while saying: "Your religious values are not superior to the laws of the republic."
Click to expand...

He has no religious values. He's a psycho nutter, end of story. 'God' has nothing to do with his crazy attitude and single brain cell.

I second the postcript Lol. There is no need to judge him.

BhagatSingh said:
I second the postcript Lol. There is no need to judge him.
Click to expand...

Actions like these will make other nurses reluctant to take care of Muslim women.

It is a shame that this man did no care about the welfare of his wife nor about the baby to be born. His Talbanised mentality laced with me-ism took the better of him which does not sit well for whatever god/deity he worships because wearing burqua is not mandatory in Islam. It is more a tradition rather than prerequisite from the religious viewpoint.

The judge did the right thing and I hope it is a lesson for the other Muslims living there.


He has no religious values. He's a psycho nutter, end of story. 'God' has nothing to do with his crazy attitude and single brain cell.

I do not think you are judging anyone, you are using perception and your life skills to make an educated guess at what this man is about, something all of us do everyday, if we were to meet this man, none of us should treat him any differently, but it is always good to keep your wits about you, and allow for possibilities based on past actions, not so much judgement, rather than awareness. Such 'nutters' exist in all religions, including Sikhi,

LOOOOL "not showing what god gave you" is totally right (according to him).

After the intimate examination I don't see the point in him hiding her face ,sounds like a case of the horse and the stable door to me! atleast he did not let a beautiful thing like the birth of his child distract him from enforcing the ultimate law of wife's face covering .
Last edited: Dec 28, 2011

@Scarlet, they only hide their faces because in mideivel India/Middle-East the Islamic Kings would kidnap women with pretty faces and this way they couldn't tell. But for some reason when their is security it is still going around xD what in Islam which is a requirement is a Hijab, not a burq:yes:a xD

India/Middle-East the Islamic Kings would kidnap women with pretty faces
Click to expand...


Kamala Devi I did not know that,but I can understand the King doing that,because if you gonna kidnap someone then it makes sense to make sure they are pretty ,as you would not want to go to all that trouble for a minger!

Haha yes xD it's in history.

Haha yes xD it's in history.
Click to expand...

Because Burka is even more enforced in Hardline or purist Islamic countries just as demeaning women through Sati and like rituals is done in more religious parts of India. Fascinating world it is, learning something new about largest of religions in the world mundahug .

Sati, meaning `true` was one of the daughters of Daksha. Sati is a Hindu goddess of marital felicity and long life and is worshipped by all Hindu women for the long life of their husbands. Sati is the first consort of Lord Shiva and his second wife is Parvati, the incarnation of Sati. In the Puranas it is mentioned that Sati lures Shiva from leading a lonely life into creative involvement in the world. Sati or Dakshayani is also known as Uma, Aparna and Sivakamini. She was named Gauri for her fair and golden complexion. She is also known as Dakshayani for being the daughter of Daksha. To win the heart of Lord Shiva, Sati abandoned the lap of royal luxury and went to the forest, where she devoted herself to austerities and the worship of Shiva. After a long time of rigorous penance, Shiva was finally pleased with Sati`s devotion and married her much against the wishes of Daksha. Daksha being an arrogant king cut off all his relations with Sati and deprived her from his family. Later, Daksha once organized a huge Yajna to which all the Gods were invited, except Sati and Shiva. Sati went to the Yagnya against the wishes of Lord Shiva. Shiva then provided her with a guide to attend the Yajna. Sati was greeted coldly by her father Daksha. They were soon in the midst of a heated argument about the demerits of Shiva. Daksha criticized Shiva in the face of all gods. Sati could not stand such abuse and she immolated herself. When Lord Shiva came to know about this devastation, he was furious. He created Virabhadra and Bhadrakali, two fierce creatures who wreaked chaos and disorder in the Yajna area. Everyone present in the Yajna along with Daksha was terrified. An enraged Lord Shiva performed the fearsome Tandava dance with Sati`s charred body on his shoulders. During this dance, Sati`s body came apart and fell into pieces at different places on earth and these places came to be famous pilgrimage sites for Hindus.
Click to expand...

@Ambarasaria the people weren't evil necisarily... but Sati isn't bad either, I mean it was created as a "choice" if you wanted to do it and I don't think Sati is actually good either anymore because Shiva did get mad when Sati did Sati...

Why would someone offer this choice to a woman? And I think Sati is no better than going in for a suicide!

Kanwaljit Singh said:
Why would someone offer this choice to a woman? And I think Sati is no better than going in for a suicide!
Click to expand...

Coerced and pressured into suicide, nonetheless. For Sati stuff murder in the second degree is a classification most likely applicable. What is wrong with religious establishments in the world's largest religions.

Why would someone offer this choice to a woman?
Click to expand...

Kanwaljit Singh ji,
It's hard to say in our times. This was not a common practice though. Most were voluntary. Completely reasonable women with sound health were doing it. Though we don't like to think so because we find the practice appalling. :sippingcoffeemunda:

Ambarsaria ji,
Don't misquote her. Play fair even if the other doesn't.