In August 2012, Prabhjot Singh, MD ’11, co-wrote an opinion piece in the New York Times in which he argued that the FBI should keep separate statistics on hate crimes against Sikhs. After months of work by activists and the convening of congressional hearings, the agency complied. “Ultimately the FBI did change its hate crime tracking system,” says Singh, a human rights advocate active in the Sikh community. “And just a few months later I was attacked, so I was one of the first people to enter that system. It became personal very fast.” 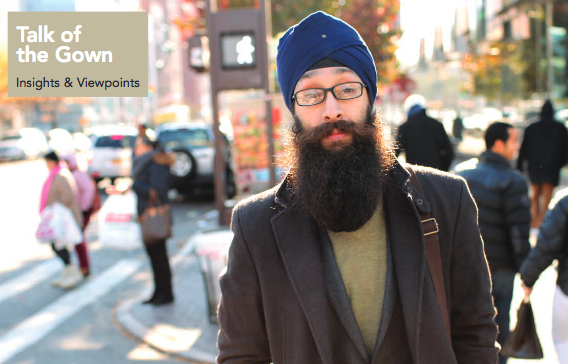 It happened one evening when Singh and his brother were taking a post-dinner walk near Central Park in Harlem, where Singh—an internal medicine resident at Mount Sinai and an assistant professor of international and public affairs at Columbia—lives with his wife and toddler son. A group of young men chased them down and surrounded them, assaulting them amid cries of “Osama!” and “Terrorist!” Singh was left with a fractured jaw—and an even greater resolve to combat the sort of hatred, intolerance, and misunderstanding of which he’d become a victim.

Sikhism is the world’s fifth largest religion, with some 24 million followers worldwide. About half a million live in the U.S.—and since the September 11 terrorist attacks, they’ve been the target of crimes spurred not only by ethnic hatred but by garden-variety ignorance. Sikhism is an independent monotheistic religion founded in
fifteenth-century India—but the turbans and untrimmed beards they wear as articles of their faith have put them in the cross-hairs of people who not only equate Islam with terrorism, but see anyone who looks like them as the enemy. Just four days after 9/11, a Sikh gas station owner was murdered in Arizona by a man who went hunting for Arabs in the name of vengeance. In the wake of that incident and others, Singh began working with civil rights organizations that promote understanding and aid victims of discrimination.

“Even today,” Singh says, “we still are chased by the ghosts of misinformation in ways that range from benign to quite hurtful, physically and verbally.”


The worst attack of its kind happened long after 9/11, when a white supremacist murdered six worshipers at a Sikh temple in Wisconsin in 2012. Singh points out that Sikhs also face institutional discrimination: due to their turbans and facial hair, they’re not accepted in either the NYPD or the U.S. military (though, he notes, a few Sikh soldiers have gotten exemptions and served with distinction). And for Singh, like many male Sikhs, air travel remains an ordeal.

“It’s something that I struggle with, although I can’t do anything about it in particular,” he says. “I’m occasionally treated quite rudely just on the basis of what I look like. My turban is patted down like I’m a terrorist; it’s wanded for bombs every time I go through. If there’s a false positive—which there occasionally is in all systems

I’m questioned extensively. At the end of the day, you’re faced with the fact that you look like somebody suspicious. And if your government tells you that, it’s not surprising that some days, in a violent way, your neighbors tell you that.”

Singh was born in Nairobi to parents that had immigrated to Kenya from India; the family moved to the U.S. (for his father’s postdoc in entomology) when he was ten. He studied biology and history at the University of Rochester before entering the Tri-Institutional MD-PhD Program; in addition to his Weill Cornell degree, he holds a doctorate in neuroscience from Rockefeller. It was during grad school that Singh became more observant and was formally initiated into the Sikh faith; the religion is non-proselytizing, has no priestly class, and requires adherents to choose initiation as adults. “Its core tenets are to remember the universal, that we’re part of a greater force that connects us all; to be proactive in your community; and to always give to others,” Singh says.

“It believes that there are many paths to achieving oneness with the universe and emphasizes love, compassion, and justice.” The religion’s principles, he notes, dovetail with those of medicine. “Sikhism emphasizes working in one’s community for the betterment of all, regardless of background—and in concrete, practical ways, being a doctor can be a wonderful way to do this,” he says. “At the same time, my faith guides me to reframe the doctor-patient relationship from a hierarchal one to that of achieving a shared goal of bettering health in ways that lead to a more caring society.” Singh’s activism has been both global and local. Through Columbia’s Earth Institute, he’s director of systems design and chairman of the One Million Community Health Worker Campaign, which is hosted by the African Union.

He’s an advisor to City Health Works, a nonprofit (founded by his wife, a Columbia-educated MBA) that aids Harlem residents coping with chronic disease. In 2012, the Robert Wood Johnson Foundation named him one of ten Young Leaders, people under forty who’ve made exceptional contributions to improving the nation’s health. “For the most part, in a professional setting, my beard and my turban have been an asset,” Singh muses. “People remember me. I have the opportunity to make the first move and set the precedent for what type of person I am. I’m basically asked, ‘What’s your deal? Why do you wear that?,’ which I welcome. I think all the questions are opportunities.”


Education education education......Please learn that Sikhs are a totally different and not connected in any way to muslims or islam. As for terrorism if the UK/US kept their imperial ambitions out of other peoples countries maybe the UK/US would not be subject to retaliation from freedom fighters or terrorists choose which in relation to your world view